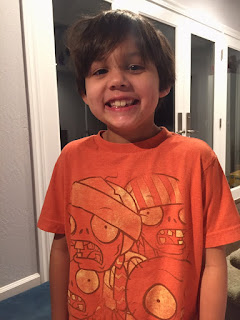 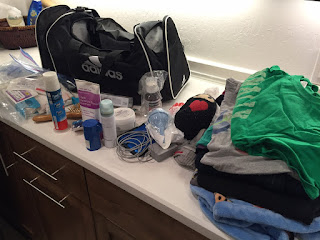 A couple of weeks ago, at Callum's monthly check up, our oncologist told me that moving forward, he wants me to start calling our pediatrician if Callum gets sick, a fever, etc.

But, Callum has been doing so well and his numbers continue to rise, that they're feeling comfortable at each monthly visit, of letting us (slowly) return to normal life. 👍🏼

So, Tuesday morning, I got a call from the school. Callum had some sort of issue on the playground where he couldn't breathe and was complaining of his chest hurting. It just so happened I was already driving to school when they called (I was headed there to volunteer for the 100th day activities), so I told them I'd stop by the office first to see how he was doing.

He was visibly upset; pretty shaken by what had happened. The nurse and I couldn't really make sense of it, and he was clearly breathing and seemed ok. But when I asked him if he was hurt, or scared, he said both (as big fat tears rolled down his face). 😢

(I took this pic of him that night when he was back home and clearly, feeling much better)

He's been fighting a cold like the rest of us, and I had been dealing with some chest congestion just that morning, myself. So I wondered if the activity on the playground caused his chest to tighten and hurt. I finally got him to relax enough to sit up, and then distract him with a couple pieces of candy. 😊

He finally started feeling better and wanted to head back to class to work on the 100th day activities - so off we went. I spent the next couple of hours giving him some distance but also keeping an eye on him. He seemed much better, and when it was time for me to go, he waved goodbye and didn't seem to mind (vs earlier, in the nurse's office, he was telling me he wanted to go to the hospital right now)

Jon and I chatted and thought maybe we should call the pediatrician? It was a strange sort of feeling to call them instead of the oncology clinic, but I did. They decided they better take a listen (to his chest) just to be sure he was ok.

So yesterday afternoon we headed to the Drs office - his Dr heard just the tiniest bit of bronchitis in his lungs, so because of that (and mostly because of Callum's history), we left with antibiotics and instructions to give a few puffs from his inhaler each night, just to give him a little extra help fighting the crud in his nose and lungs. I don't think Dr Safir would've normally prescribed antibiotics, honestly, but it was clear he was taking a more conservative and cautious approach with Callum. I noticed that of the nurses and school staff the day before too. It's funny how much we've all been affected by this....

So! Continuing on the theme of cutting the cord, I (finally) decided to pull out our emergency overnight bag from the car (which I've kept packed and stocked in the car since he was first diagnosed) and unpack it.

Which felt a little weird.

Like, one less security blanket for us to fall back on. 😁

Next up (but maybe in a couple of weeks because I'm finding I can't do it all at once!)....cleaning out his medicine cabinet. 😱
Posted by Mama Bree at 8:17 PM