Chefs in the making 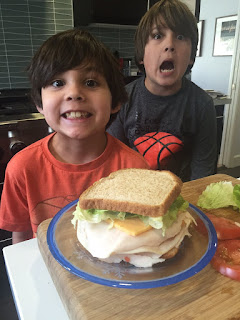 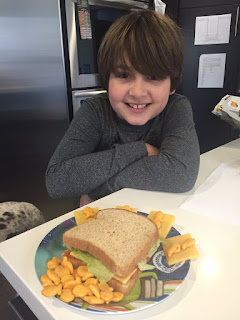 We've been watching more and more shows on the Food Network, which has been a nice change of pace. The boys love the kid competitions the best, of course.

What's also been nice is it has created a real interest (in both, but mostly in Logan), to learn how to cook and bake. He sees these 9-12 year olds making some amazing stuff and I think it's made him realize that 1) he doesn't know how to cook at all and 2) he could totally learn since these kids can do it and they're his same age! :)

Both boys (and I) stayed home sick today since we continue to fight whatever crud is floating around. At lunchtime I had made some quick pasta (because let's face it, I had no desire to cook myself since I was feeling pretty crappy too) - but neither boy wanted it. Logan asked if he could make himself a sandwich instead and I said sure why not. As long as YOU make it :)

I helped teach them how to wash and cut their veggies and where everything was in the fridge and cupboards, but otherwise they were both on their own and had a ball. And, scarfed down their food too. ;-)

*** Take note of the little goldfish crackers on the slices of cheese on Logan's plate - that was his first attempt at an appetizer - but after he ate them, he decided they were too cheesy. So then he made a few more appetizers (this time he crumbled potato chips and crackers on top of his slices of cheese, along with some cashews on the side). His second attempt, we decided, was better, but still off on flavors (cashews and cheddar cheese do NOT go together FYI 😖and the cheese still overpowered the bite). So he's working out (in his head and on paper) what his next appetizer dish will be! 😂😂
Posted by Mama Bree at 6:27 PM