Today I suggested Jon feed Callum some jarred food, to see if that would satiate him a bit more and help him sleep through the night (he's been doing great with the rice cereal but frankly, we're at that point where we'll try anything to get him to sleep a bit longer!). So, we decided on carrots as his first real "solid" food! 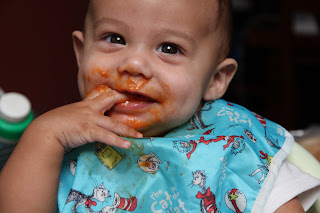 Callum seemed to enjoy the new taste. Jon was able to get through a little less than a jar before Callum had enough - he was QUITE the mess afterward! But, he was all smiles. Later this evening, I gave him the rest of that jar, plus TWO MORE JARS. The kid was a fiend and just kept on going. I was thinking this would be GREAT news for tonight - however, after he was done, he proceeded to have a massive poop which spilled out all over his high chair seat (incidentally, Logan was yelling to me from the bathroom about the massive poop he just had himself. Jon was conveniently NOT home but at a rugby game....) *sigh* 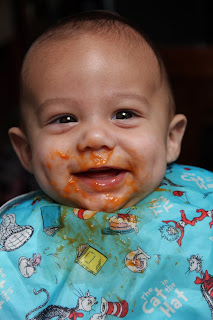 Callum passed out soon after and now I'm wondering if that big poop just made some more room in his little tummy which I was hoping to fill with the carrots. Hopefully he won't wake up so hungry and wide-eyed tonight. *shrug* I guess we'll see.
Posted by Mama Bree at 8:21 PM

What a happy little guy. But then who doesn't like carrots?