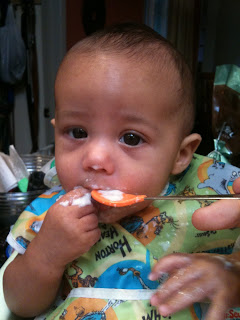 Because I didn't have enough going on today, I decided to give Callum his first taste of "solids" (aka rice cereal) for dinner tonight. He did surprisingly well!

My first day at work today was long and tedious, most of the time spent on the phone with IT, trying to get my laptop back on the corporate network. Yay.

Unfortunately, his cough and congestion seem to be getting worse instead of better. Normally, I can calm him down enough to eat and (eventually) fall back to sleep. But last night he REFUSED to go to sleep. He was exhausted and clearly uncomfortable and in pain, shrieking in our ears regardless of how we held him, rocked him, etc. It was horrible.

Today was also really rough. Halfway through the day I got a call from the daycare. They were really worried because he refused to eat and was extremely pissed anytime they tried to offer him a bottle. I finally went over mid-day to see if I could get him to eat and, at the very least, give him some Tylenol. He wouldn't eat but was very tired, passing out for a nap the minute I put him on my chest/shoulder. :( He continued to have a bad day after I left, so I picked him up early to try and get him to eat. He finally took a bottle after much waiting and coaxing which made the teachers (and me) feel a bit better.

Jon is working late tonight and most nights this week. Hopefully what we dealt with last night and today is the worst of it for poor Callum. Whatever "it" is!

is he getting better now? You may try Nin Jiom Pei Pa Koa (ninjiom-hk.cwahi.net). i know alot of people use it, its also non alcoholic, though it's effectiveness is not as good as alcohol based cough medicine, but it's still good to use on not so serious coughs.

apprently ( according to the instruction) children from 2 to 12 can use it.

Sorry to hear Callum is having such a rough time. Hopefully he feels better soon!