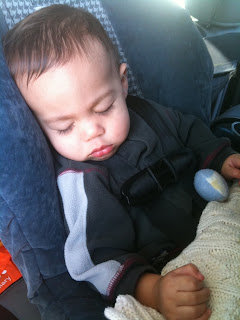 The surgery was super quick. I had time to text Jon about where I was waiting (he had to leave just before the surgery to take my parents to the airport) and then literally Callum's doctor was looking for me to give me the update.

Callum did awesome. He had A LOT of fluid in his ears which they drained before inserting the tubes, and the tubes took just fine. Minutes after talking with the doctor, his anesthesiologist came looking for me. Callum had woken up and was hungry.

He gulped down a bottle and while a little antsy (he really wanted to crawl around), he was super mellow and quiet. The nurses labeled him the "good" baby (because he was so quiet). ;-)

We were out of the hospital less than an hour after his surgery time! Incredible. He fell asleep on the drive home, hopefully he'll have a really great nap this morning. He's certainly earned it! :)

Yay! I am glad everything went according to plan!