Well, it comes to no surprise that Callum quickly picked up on his rocking and scooting and elevated it to full on CRAWLING in just a few short days! He's been making his way around the house on his very own for many many weeks now and is becoming an old pro. He's also extremely eager to stand - and pulls himself up on anything he is able to (when he's strong enough, some of the taller pieces of furniture still allude him). He'll "walk" a few steps while holding onto your fingers but he hasn't quite got the balance down enough to take a few steps on his own. In due time - we know it's around the corner! 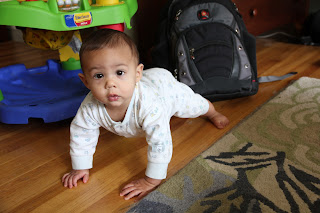 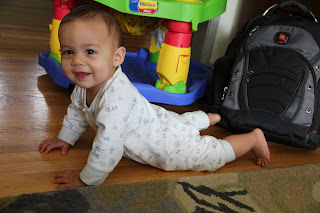 He doesn't speak anything more than cooing, babbling, and a constant stream of "dadadadada" :) but he knows what he wants and how to get it. If you walk into the room that he's in, and he wants you to pick him up, he'll immediately crawl to your feet and PULL on your pant legs, whining at the same time, until you give in (or until he escalates to crying if he's really upset, tired or hungry). 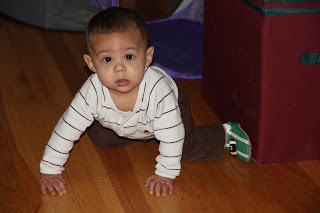 He's doing really well at eating - and even though he's been battling one ear infection after another, he's still able to take down a bottle or put a jar of food away no problem. I had started him on some "puffs" and yogurt melts, to give him some practice at picking small objects up with his fingers, but because he's been so sick, it hasn't gone really well (he LOVES to eat them, but if he gets one caught down his throat the wrong way, or inhales one mid-cough, that's the end of the puff AND all of the peas, or squash or yogurt we just fed him, since the choking leads to puking everything back up). So, we're taking a break on "harder" solids for now and sticking with the stuff that doesn't cause him to lose his meal. 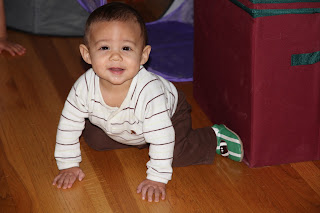 He did get a chance to try some juice for the first time this past weekend. Since he's been on so many anti-biotics, the doctors have told us to keep him REALLY hydrated, but on the flip side, milk isn't great when you've got a head cold and are congested, so Dr. Safir gave us the ok this past week to start giving a bit of juice or water instead. Callum was more interested in biting the sippy cup's handles and nipple than he was at drinking the juice. :)

He now has both bottom front teeth in, quite visible and sharp as all hell. A third has been threatening to appear (next to his bottom front left) for a few days now - which makes it hard to tell if all the biting and mouthing and drooling and runny nose is due to (yet) another cold, or just more teething? 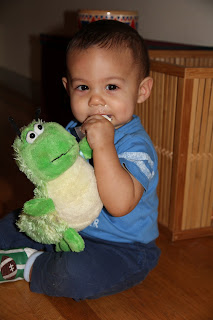 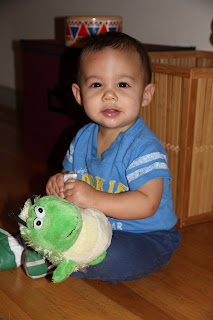 Along with (or because of?) the teething and cooing, Callum has discovered his lips and tongue. He absolutely LOVES to play with his lips and make sounds while plucking them with his fingers. And, he's recently discovered the fun art of clicking his tongue - which he does all the time, but particularly if I'm not fast enough with the food at the dinner table. ;-) 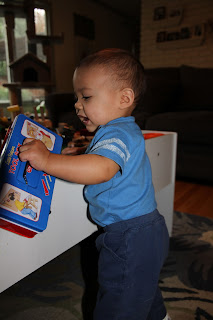 In fact, now that he's mobile, sounds are taking on a whole new meaning for Callum. He is free to pick up anything he sees and throw it, drop it, or most often, bang it on the floor or other hard surface. He seems to be pretty curious as he tests out everything he sees to figure out the sound it makes and what happens when he drops it or hits it on something else. It can be nerve-racking for us (not to mention, it upsets Logan anytime Callum rips apart a train track or two from his table!), but we know it's all just a part of the learning and soaking in that he's doing right now. :) 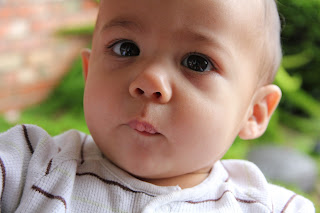 While we love Callum to pieces, we definitely are getting tired of the mid-night wake up calls. It's particularly trying when Logan wakes up too, and/or the two of them are sick. But, we're doing the best we can right now. Days when Logan and Callum are peacefully playing side by side in the living room, with Logan talking to his best friend and expecting answers back, definitely make it all worth while. :)
Posted by Mama Bree at 1:16 PM

He is so stinking cute. Especially in person.