Here it is over 3 weeks past my son's third birthday and I'm finally getting around to posting.  I think I've decided that I can't keep up with the monthly updates, and will just have to move to yearly from here.  It was a good run while it lasted Logan!  ;-) 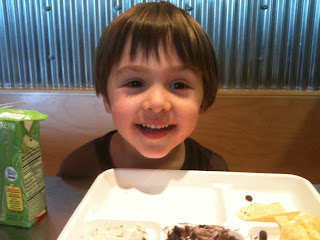 So what can I say about Mr. Logan?  I say it every time (and I'm sure at some point I'll stop saying this), but this is now my favorite age!  I recently received my monthly newsletter from Babycenter about Logan titled:  Your Little Chatterbox

And oooohhhh, how true that is!

I would say that's the biggest change and development in Logan overall.  Every minute, every hour, every day, every month - he picks up additional words that just crack us up.  We have no idea where he hears them half the time but his ability to immediately recognize meaning and patch these new words into sentences (usually correctly!) is astounding. 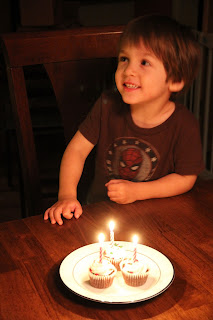 Mommy, can I have some juice?

Sure.  (pours a glass of juice)

But I want some sugar in it.  I want A LOT of sugar!

(We normally add half water to his juice, because we've told him the juice has too much sugar in it... so our best guess is, he now thinks water is also called sugar... *shrug*)

He's also VERY interested in "bad words".  Everything is now a bad word.  And, he's quick to let you know it. 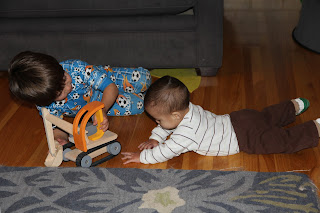 Just the other day, while I was in the kitchen cooking our holiday dinner, Logan was playing in the living room with Callum.  I could hear Logan directing and talking to Callum nonstop - telling him what to do, what to play with, what to look at.  I then heard Callum whine - and I heard Logan say something about "that" being "his toy" and Callum couldn't play with it.  I yelled from the kitchen - Logan, you need to share your toys with Callum.

Logan yelled back, "But, it's not a party in here!"

I guess we're only sharing toys at parties now. 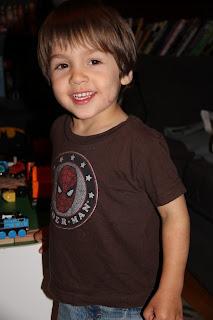 With all the energy Logan has day in and day out, he's often times too busy playing to pay attention or listen to his Mom and Dad.  I can't tell you how many times we have to tell him to listen to us, and when he's not listening, he gets a timeout. I fear it's going to be a constant battle with him - to pay attention and listen to what we have to say or are telling him to do.  It's also kicking us in the ass - since there are times where Jon or I have work to do, or chores to do, or heaven forbid, want to engage in a conversation between each other.  It's usually at that very moment, that Logan tries to interrupt, yelling at one or both of us: 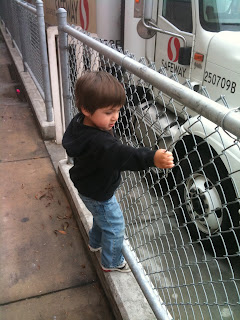 A few weekends ago, I needed to stop by the pharmacy on our way home from swimming class.  Logan was full of energy and happy to be out of the house.  While at the checkout stand, he was busy using the shopping cart as his personal jungle gym, crawling up and down and in and out while I'm trying to pay and get the hell out of there before he breaks something (or a limb).  He's talking nonstop the entire time - pausing between jumps and climbs to wave and bellow out "Hi!" at the top of his lungs at each new person who walks by or enters the store.

The cashier (probably a grandmother herself), was laughing and commented to me, "He sure does have a lot of energy, doesn't he?"  To which I responded, "Yep, and this is after just finishing up a half hour swim class!"

She was a little surprised.

Because he's running around so much, I guess it makes sense that he'll fall or hit his head from time to time.  The nice thing is, we have a tough little boy.  Often times, immediately after bonking his head on something, he'll yell out to me:

and then return to his playing.  Before I even get a chance to look up.

It's one of the many reasons why I love that Logan attends preschool actually.  He's outside, playing in the yard, and running off this endless energy, at least 4-5 times a day.  I could never keep up with him on a regular basis on my own! 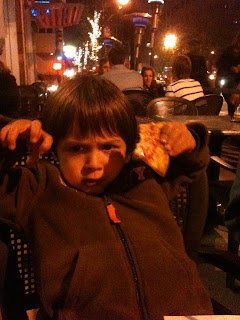 As I was getting him dressed today, to get ready for the movies with Daddy (Jon's taking him to see Tangled again, since the last outing with me he didn't fare so well), all he wanted to do was climb and jump on me and tackle me to the ground.

Mom, let's tackle and punch ourselves!

Punch ourselves?  No, we don't punch people.

Yes we do!  You have to punch nicely.  Daddy punches nicely.

I later told this to Jon, who then laughed asking Logan to show him how to punch nicely - at which point Logan socks the shit out of Jon's chest.  Yes.  Nicely.  I guess we need to work on the meaning of that word some more.  (or perhaps, get him to learn not to punch at all?!)

Another one of Logan's latest interests is peeing and pooping.  Not the potty training stuff - he's a master at that (to the point that half the time, we don't even bother helping him in the bathroom since he does it all himself!).

No, it's the TOPIC of talking about peeing and pooping.  Really, I thought that we'd have a few more years before this started.  But, I guess it hits at a much earlier age.  In fact, at a recent neighborhood holiday party we went to, the "older" 6-8 year old boys that Logan was infatuated with and following around nonstop, thought the little 3 year old who wouldn't stop talking about peeing and pooping was REALLY WEIRD.

Callum, I'm going to poop on you! 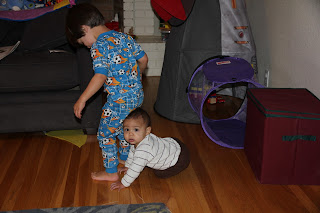 And that, my friends, is the epitome of sibling love right there.
Posted by Mama Bree at 1:06 PM