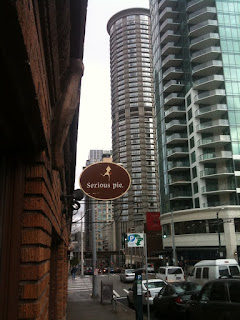 I worked super late last night, got up and worked some more, then took off just before noon to pick up Jon and the boys.

We've decided NOT to rent a car this trip and rely on public transportation. Seattle actually has some great transportation options available. So, I hopped onto the light rail (the station is a block and a half from our hotel) and headed to the airport, met everyone at baggage claim (I received thrilled welcomes from all three) and then headed back downtown on the light rail again. Logan had a blast on the "choo-choo train", pointing out the airplanes and airport (as we left), other trains that kept passing us, the bridges, the tunnels and the TRACKS MOM!! LOOK AT THE TRACKS!!!

Seriously. My kid was tickled pink about tracks.

After dropping off the bags at the hotel, we decided to grab a bite to eat at a nearby restaurant called Serious Pie. Super yummy and different flavored pizzas. This pic was taken just outside the front door, with our hotel tower in the distance.

After lunch, we walked all over downtown Seattle searching for a store that sells diapers and formula. Who would have thought it'd be so hard to find?!? We also made it down to the Pike Street Market and did a little shopping on our way back to the hotel.

When we got back, Jon decided to find out if the room next to ours was free since he was worried we'd all have trouble sleeping in the same room. It was booked but they offered us a free upgrade to a Junior Suite (two adjoining rooms) in the other tower.

We took it (giving up our fantastic view but it was a hard offer to pass)!