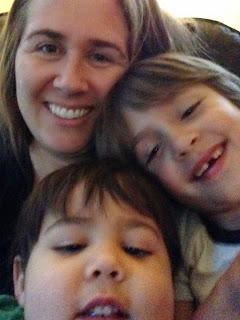 This afternoon I received a call from the mom of one of Logan's friends, that knocked me down unexpectedly. Her son was just diagnosed with a case of chicken pox. He and Logan had just had a play date this last Saturday, which meant Logan was exposed.

My stomach dropped when I heard the news.

Logan's friend is vaccinated, as are both Logan and Callum (Callum has had his first dose; his second shot was due on his fourth birthday, but given his treatments, all vaccines are on hold right now). So, while Logan's friend was contagious, he would have been less so than if he hadn't been vaccinated, which at least is good.

Before, this wouldn't have been a big deal to me. But man, how life does change. Chicken pox is one of the scariest things that you can get when your immune system is compromised. And if Callum catches it, we will have a much bigger and more critical issue to deal with.

Logan came home just after the call, so I immediately moved him to his room, stripped him down buck naked, and examined every square inch of his body while quizzing him on how he was feeling. He seems to be ok, so far.

I also spoke to one of the on-call doctors who had called me back right away, thank goodness. He was pretty concerned until he heard that Callum hadn't been exposed directly, just Logan, at which point he relaxed a little bit.

He said at this point, all we can do is sit and wait and watch Logan closely for any signs or symptoms that might arise. We don't need to do anything now but if we notice a rash or cough develop, we should quarantine and contact them immediately. The incubation period for chicken pox is quite long, lasting a few weeks, so I'll be on edge more than usual, for awhile I guess. And unfortunately, all of this also means Logan won't be able to visit at the hospital for the next 3-4 weeks. :(

As stressed as I was (and still am), I didn't want the news to upset the boys, so I tried to make sure we still had some fun tonight, playing with some new Hot Wheels that Callum and I bought at the store, and taking "selfies" like the one above.

They say that married people tend to live longer, but once you have kids, your lifespan is reduced. I wonder what these last couple of months (and further crap like today) has done to my (and Jon's) lifespan. *sigh*
Posted by Mama Bree at 12:08 AM