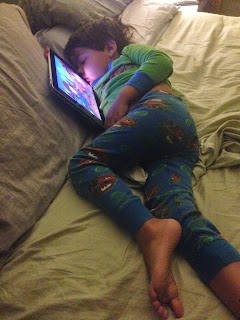 Paul offered to watch the boys this evening while Jon and I snuck off to an early movie and dinner. It was so nice to get out of the house together for a bit!

When we got home, Callum snuck off to our room without saying hi. I tracked him down and he sheepishly said to me "I'm watching Ben 10!!" *giggle giggle*. He knows he's not allowed to watch that show, but he's gotten smart enough to look for it on the Netflix app on his iPad and sneak some in apparently (he didn't argue when I told him to switch it, so at least I'm not having those battles with him yet).

Later, I was helping Logan get ready for bed and after I tucked him in, I headed back to our room to get Callum next. And here is what I found. I guess we had a pretty good day. ;-)
Posted by Mama Bree at 10:52 PM