I meant to post these pics too, when we were discharged on Wednesday, but I was so deadbeat tired that I barely had enough energy to unpack and start laundry when we got home.  And then I passed out with my little guy.  ;-)

But, I did want to share because they were so darn cute.  These first couple are of Callum just a few feet outside, as we left the hospital.  It was funny watching him run ahead of me, clearly excited to go home, but then get distracted like any little boy would, with curbs to balance along or railings to immediately climb.  Anytime his "old self" comes out like this, my heart beams. 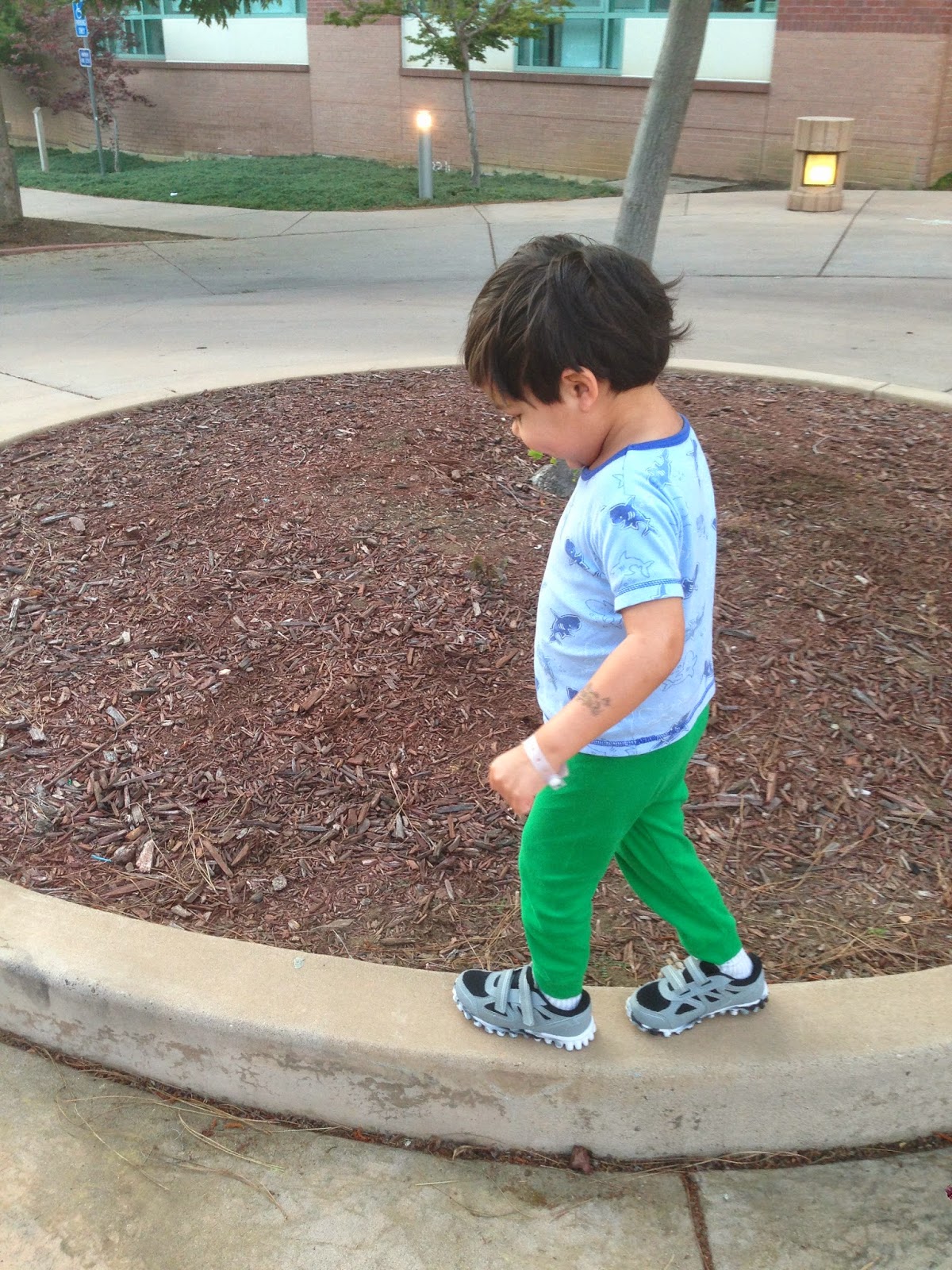 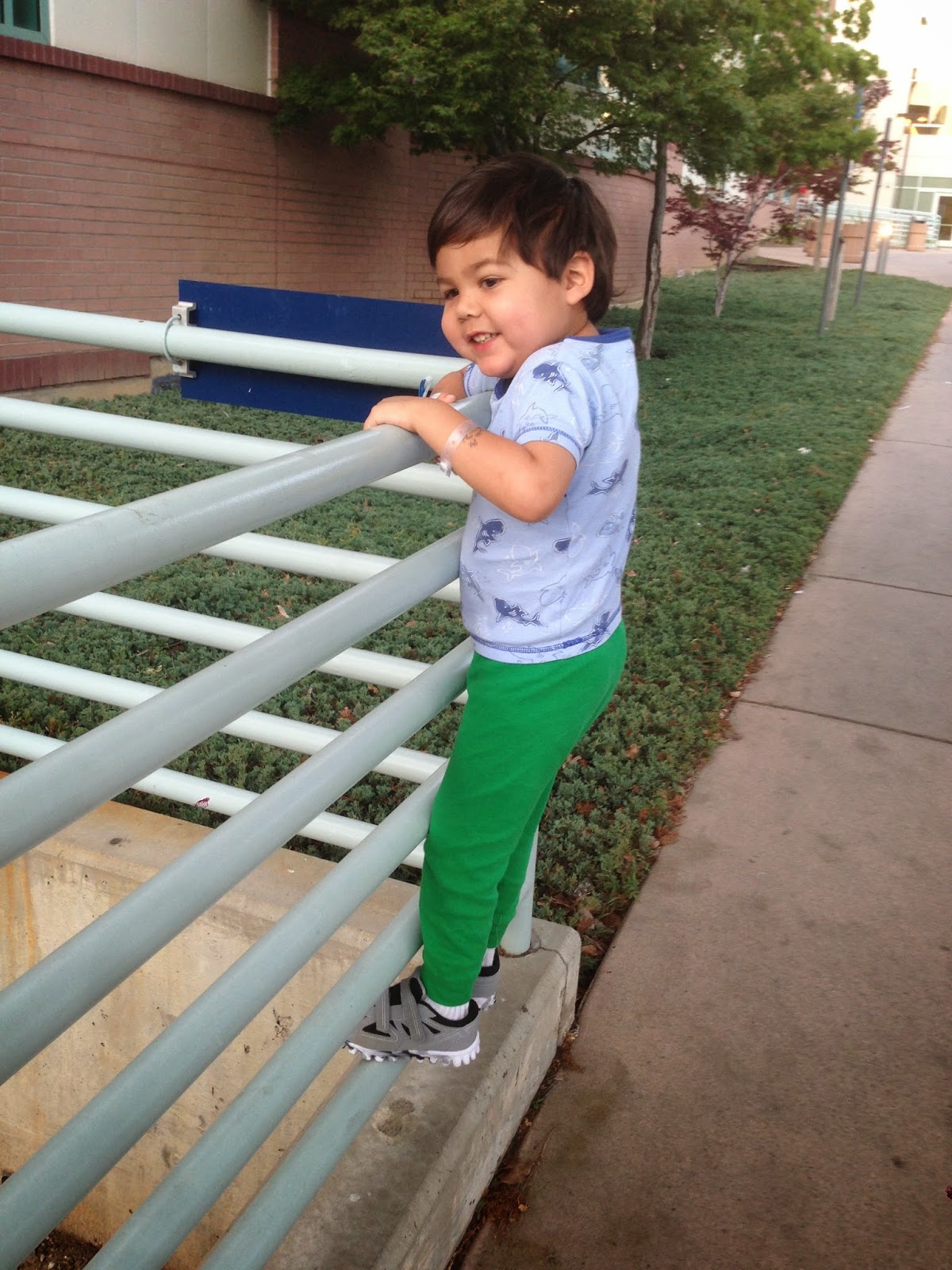 And here he is eating a snack for the night.  He initially wanted hummus with "peanut" (pita) bread.  But we didn't have any.  So then he says, "ok, can I have carrots with ranch then?" 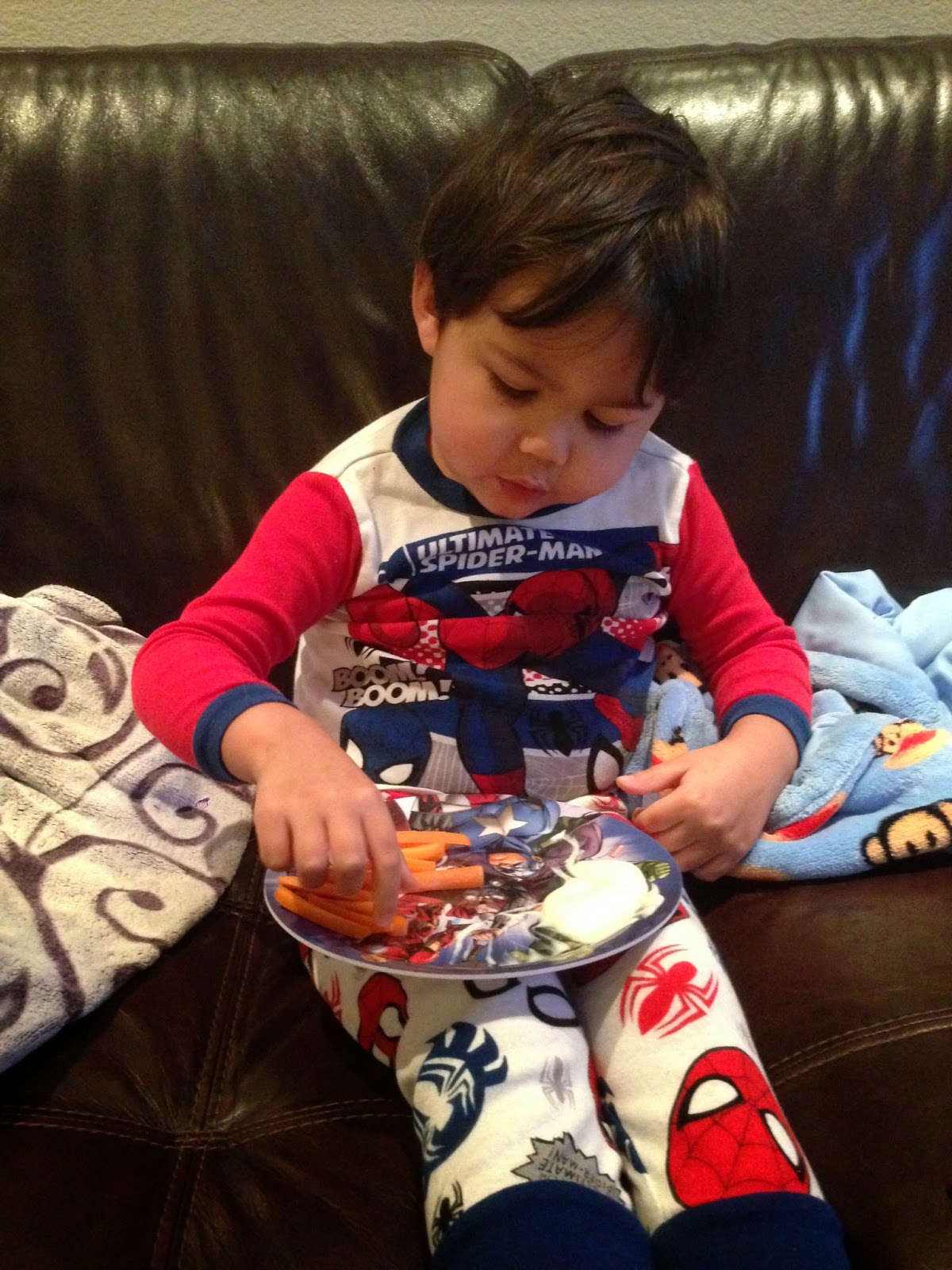 Side note: it's SO BIZARRE switching from the crazy cravings he's had on steroids to the aversions he gets (with nausea) from the chemo.  I feel like I'm constantly dancing the fine line of feeding a ravenous animal nonstop or begging him to just have a couple of fishy crackers!

The first admission is always the hardest for the doctors to predict how we'll do (and how long we'll stay) since everyone is different in terms of how fast they flush the chemo out of their systems.

I now understand why and learned a lot this last week.  The way I think of it is, we're essentially poisoning him to kill as many of the leukemia as we can, while at the same time, flushing the poison out of his system so we won't have any longer term effects.  While the chemo is administered, they're also giving him a few other meds to counter balance the negative effects the chemo has on his body (like beating up his kidneys and liver).

They're monitoring him very closely (thus the hospital admissions), and constantly testing his urine, watching his intake and outtake of fluids, etc.

We have 6 hours from the time his LP is complete, to begin the IV of methotrexate,  So, in those 6 hours, Callum is recovering from the procedure, they're calling the ambulance to transport us to another hospital, nurses are handing off info from one team to another, we drive to the next hospital, get checked in, get examined by the medical team on rotation there, and check his urine levels.  If his urine and physical exam all check out ok, the doctors then approve the chemo order, and the pharmacy "whips up" (in quotes because they are S-L-O-W) his dosing to begin the 24 hour drip.

Our "Hour Zero" was at 3pm Monday afternoon.  The nurses talk about everything in hours.  At Hour 24 (or about, it's not totally exact btw!), the chemo is complete and they immediately draw blood.  This then gets shipped back to Stanford for analysis and more specifically, his methotrexate levels.  If his levels are less than 20, we don't need to draw levels again until Hour 48.  But if his levels are greater than 20, we draw levels again at Hour 36.

So, Hour 24 levels for Callum were 23.37.  Later, I learned the doctors aren't super nervous about this particular draw (unless, I bet, the levels are sky rocket high), since all it's really giving us is a baseline the minute the chemo is done (and clearly, there is still going to be a fair amount of chemo in his body).

But, they did up the rate of his fluids (which mean he was going to start peeing even MORE often, and lucky me, thru the night) and ordered the nurses to draw again at Hour 36 (3am).

Hour 36 levels dropped dramatically, to 0.69.  Yay!  But, we weren't clear yet.  Our goal (and criteria for discharge, I learned) was to get to 0.2 or lower.  So, we draw levels again at Hour 42.  Because the blood is shipped off and through Stanford, it's insanely slow - each time is about a 4 hour wait.  Ugh!

The doctors say that usually the first visit dictates how the rest of our admissions will go (with the last admission being possibly longer, they're not sure why but they think it's due to a bit of cumulative effect over time).

They were very pleased with how well he did and how quickly the chemo flushed out of his system.  So, all in all, a pretty good outcome!

Wash, rinse and repeat for the next few months.