I meant to blog a proper post on how Monday's vincristine administration went, with a few fun pics, but after we waited (FOREVER) for a simple 1 minute dose, we were pretty spent.  We also picked up Logan from school for the first time (Paul had been taking care of logan drop offs and pick ups while staying with us, but he had to return back home for work a couple of weeks ago. I got a few Mama friends to help out on pick ups after school last week but decided I'd try juggling it on my own this week!)  And, it was a scorcher outside.

So, all that meant that by the time we finally got home, we three just wanted to rest and relax and not think much about doctors or nurses or blogging or homework or anything else.  ;-)   (actually, we truly skipped homework!  Logan has been having a rough time the last couple of days with either some growing pains or a pulled muscle in his leg, so I gave him a night off on Monday while he laid up on the couch icing his leg).

Callum was actually in a great mood for most of the time we were at the hospital and SUPER goofy while we waited for the nurses to examine him and administer his chemo.  He was really interested in his port and how they accessed it, but because of how high it is on his chest, he couldn't actually see it.  So, I gave him my phone, on camera mode, so he could see himself in the picture.

He thought this was pretty cool but more than anything, he was jazzed that he could take a hundred (or more) selfies.  I posted a quick screenshot of those, when I got home later and discovered just how many he had clicked :)  but I pulled out one that was one of my favorites - a genuine happy smile from our little guy. 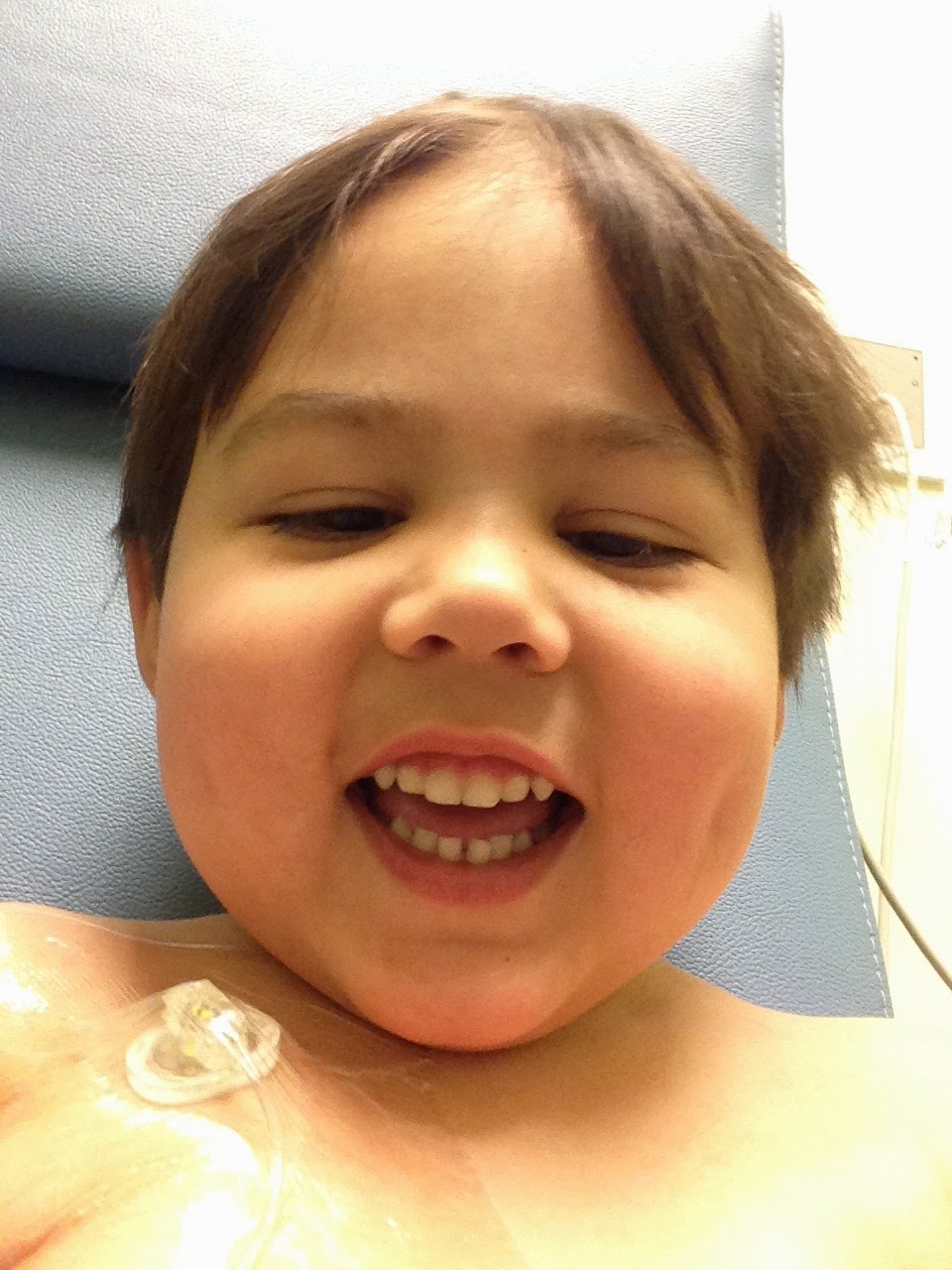 This really was him most of the visit (save for accessing his port where he was a screaming traumatized mess).  He was all smiles and dance moves and jiggly butt anytime the nurse walked in (which embarrassed the heck out of her).  Ha!  Here is a shot of him in action, dancing to something on the TV in front of him.... 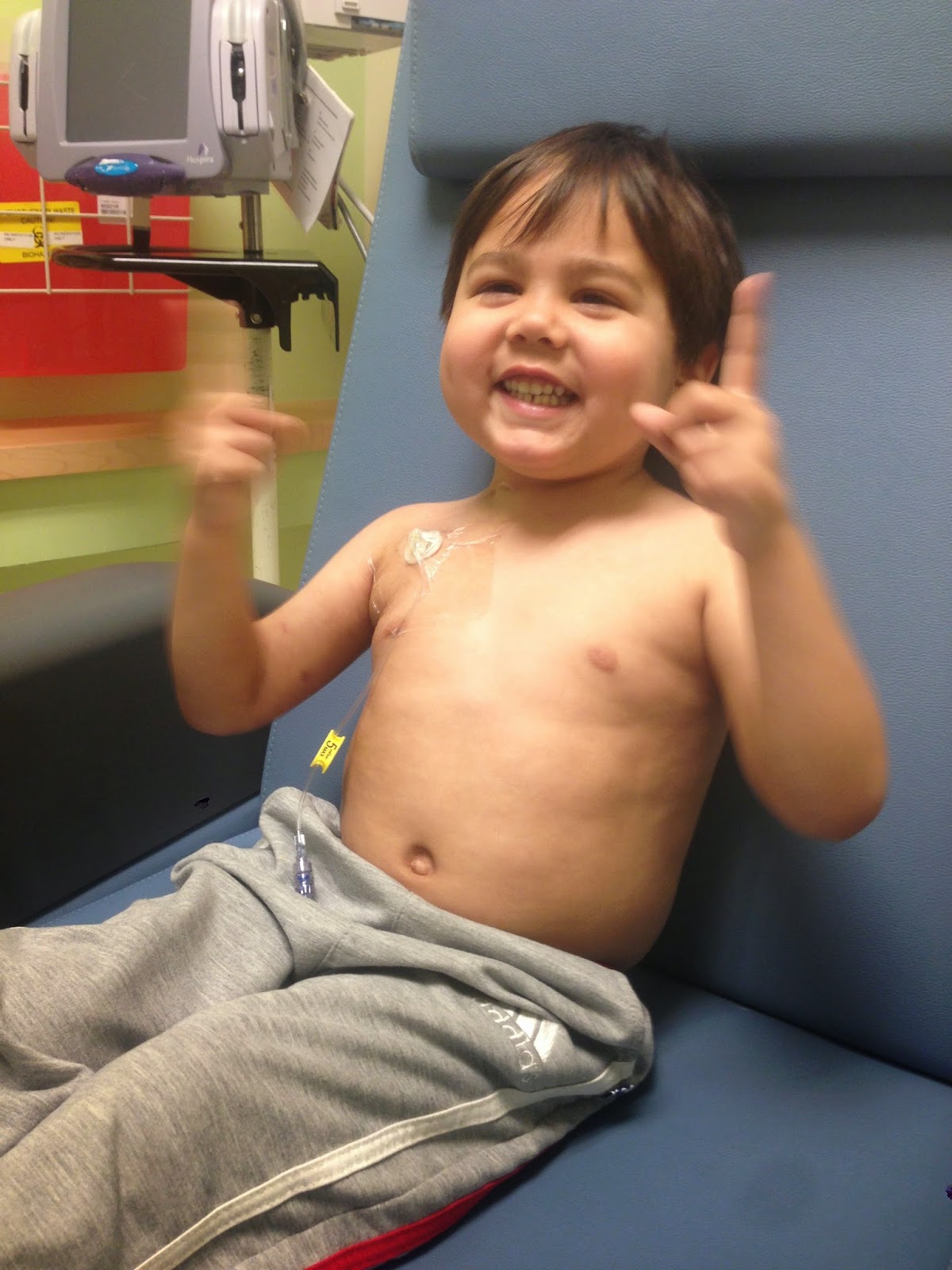 And then when it was FINALLY time to administer chemo, he insisted on helped her push it in (he didn't actually help with the chemo, but this is him helping flush his line after it was done). 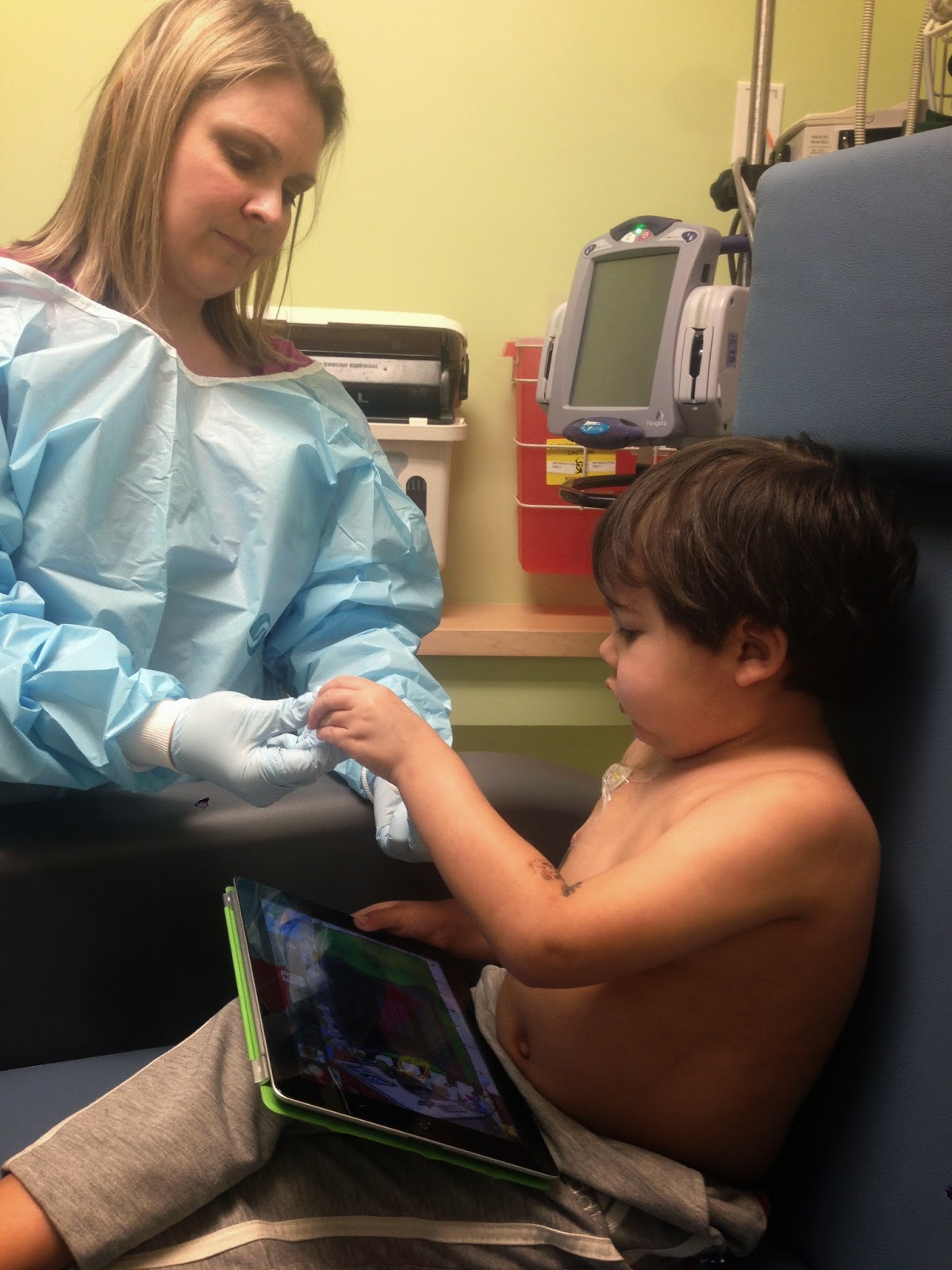 Other news: Callum just finished up his 7 day stint of steroids (and a few other drugs), so Monday morning was back to our relaxed "very little" drug routine - yipppeee!!  We are both enjoying these breaks quite a bit.  ;-)

Besides the hospital visits, we tend to spend our days hanging out at the house doing chores and odd tasks I've had on my to-do list forever.  :)  I've also started trying to work out a bit again (I'm hoping it'll help with my back), so I take a short break from Callum and hit the elliptical machine in the garage each morning.

Lately, I've also been spending a lot of time on the phone dealing with (buffoons regarding) medical related topics.  Monday it was all about rescheduling our appointment later this week.  Man oh MAN do I like our doctors, but I can't STAND the schedulers!!  :(

Anyway, we had a lab draw appointment for this Thursday, to check Callum's blood work for next Monday's hospital admission (remember, we have to make counts each time prior to admission).  However, Thursday is also a field trip day for Logan that I've signed up as chaperone.  Originally, Jon was going to stay home to hang out with Callum and take him to his appointment, but his work schedule got turned upside down and he now has a Thursday morning meeting on calendar that he couldn't get out of.  Ugh.  :(

So, I called the clinic to reschedule the lab visit to Friday, which they weren't sure they could do - I told them I was sure we could do it, but if they really felt the need then to call my doctor ASAP to confirm and call me back ASAP to get the new appointment on schedule because I've gotta juggle who is going to watch who, and when (hellllloooo people, we still do actually have lives other than hospital visits to manage).  :/

Aaaand, no call back from them meant I sent a very direct email to my doctor (who replied almost immediately, yeah no problem, move it to Friday) and then a call back to the clinic to say MOVE IT.

Yesterday, I had a similar phone tag marathon, but this time with the pharmacies.  We're running low on Miralax, which we have to give Callum daily, so I asked Stanford to transfer the prescription to our local pharmacy at CVS (easier for us to pick up).  They said "Oh, CVS has to call us and request a transfer."  I said hmmm, that's not entirely true - you've transferred for me before.  Well, that must've been an issue that we were helping you deal with (it was).  Annoying, but ok fine.

So I called CVS and asked them to call Stanford to transfer the prescription to them and then fill it for me.  Sure no problem, they said.  A few hours later, they called me back, to let me know that our insurance doesn't cover it.

I said hmmm, that's not true - I filled it at Stanford and insurance covered it.  Are you sure?

Ok, fine, maybe there's something weird about the insurance covering at Stanford but not at CVS.  Since I don't need it immediately, I'll just have Stanford fill it and pick it up the next time we're there.

Ok, but you'll need Stanford to call us to transfer it back.

So I called Stanford, who said well that's weird, insurance should've covered it since they covered it for us.

I said yep, I agree, but I'm not paying out of pocket if we know it's covered through you guys so please take it back and fill it and I'll pick it up later this week when I'm back at the clinic.

Oh, sorry ma'am, we can't.  Now that we've transferred the prescription out, you'll need to call your doctor and have them write a new prescription for us to fill.

ARE YOU FUCKING KIDDING ME?!?

So I said no, that's stupid.  It's a good prescription with a few refills left that YOU HAD LESS THAN 24 HOURS AGO.  I don't care who you need to talk to, BUT FIGURE THIS SHIT OUT.

She puts me on hold, then comes back and says ok, we'll call CVS and transfer it back later today after the pharmacists return from lunch.

I can't believe how idiotic the bureaucratic bullshit is that we have to deal with, and further, I'm sure most people don't question or push back, so how even MORE awful for them to have to deal with these constant runarounds.  :(

BUT.  Here's the topping on the cake for this story.  A couple of hours later, CVS calls me again, to let me know they talked to Stanford, sorted out the insurance coverage, and they've got our prescription ready for pick up.