Like clockwork, Callum began experiencing jaw pain this weekend, a horribly uncomfortable side effect of the Vincristine.  Normally, we are able to manage the discomfort with a heat pad held on his cheeks, but this time it didn't seem to be helping.  And, to add fuel to the fire, his legs started hurting quite a bit as well (bone pain is a known side effect of Vincristine).

Because he's on steroids, he's particularly moody and cranky - which makes this all the more amplified because he's feeling so miserable from the bone pain, and then gets super emotional from the steroids.  The steroids also make him super hungry - but he's been in so much pain from his jaw and legs that he can't focus enough to tell me what he wants to eat (and it's painful to chew).

Last night I gave him some Benadryl to try and help him sleep better (because he's been having very restless nights).... I also laid down with him since he's been needing a lot more TLC to help calm down.  It helped a little bit - but he was still very restless, moaning and uncomfortable, kicking and twitching in pain all night.  He finally woke up about 11pm crying in pain, and I couldn't get him to calm down.  I couldn't give him any more Benadryl, since it was too early and we're not supposed to give Tylenol, because it could mask a fever (in hindsight, I should have called into the clinic and asked permission to give Tylenol!).

We do have a prescription of a strong pain killer (oxycodone) which we can use if he's dealing with bad pain - so I decided I better give him that.  It's actually an expired prescription, so I knew it wouldn't be fully effective, but I was hoping it would at least take the edge off so he could get comfortable and get some rest.

I pulled out the bottle, which read 5mg/5ml - so I proceeded to give him 5mls of the medicine.  As I was putting away the bottle, I noticed I misread the label.  The 5mg/5ml was giving the strength of the prescription - but the actual instructions read "give 1ml..."

I seriously panicked.  I haven't experienced that type of sheer fear in a very long time - maybe ever.

I called the on-call oncologist immediately to see what we needed to do.  While waiting on hold (which felt like FOREVER mind you), I woke Jon up and asked him to sit with Callum, make sure he was doing ok and stayed conscious - he asked what happened?  I said, I just gave him 5x the dose he needs for oxycodone.

He repeated what I had said earlier, OH SHIT.

As soon as the oncologist answered - she started asking about how Callum was feeling (because I had talked to her two nights prior about some painful constipation he was dealing with, so she thought I was checking in).

I interrupted her and said yes yes, that's not the issue now.  I gave him too much oxycodone and I'm pretty panicked right now so I need you to help calm me down and tell me what to do before I freak the shit out.

So, I told her the events that led to me giving oxycodone and how I misread the prescription.  In addition to the prescription being expired, it was also written when he was smaller - so I was HOPING that, because he is heavier now, maybe the overdose wasn't as much as I thought.  We did some quick math and concluded he probably had about 2x the dose he would need, not 5x, which made me feel better.  Still freaking out, and worried sick, but a tiny bit relieved.

She told me he would be okay, not to worry, and to bring him into the ER so that we could have a doctor assess him in person.  I said no problem - hung up and started to get dressed.  Then, out of nowhere, I just lost my cool completely and broke down sobbing.  I'm pretty sure it was plain ol' adrenaline that was helping me keep a level head and talk to the doctor to figure out a plan - and once my body knew we were going to be ok, that we were headed to the hospital, it just collapsed without warning underneath me.

I know I was stressed from worry about Callum's discomfort, and extremely tired from a few sleepless nights, so I know HOW I could make the mistake I did - but I still couldn't believe I DID make the mistake that I did.  :(

Here we've been, literally fighting for Callum's life these past 2.5 years, beating Cancer to the ground, and then I do something as stupid as overdose him with a strong pain killer.  :(

I was embarrassed.  I was mortified.  I was scared.

So, we headed to the ER.  The 10 minute drive felt like forever.  I was acting like a crazy lady - mumbling to myself, impatiently asking the red lights to switch to green faster.  I was still really anxious and just wanted to be at the hospital already.  Callum was pretty sleepy, as the meds were starting to kick in, but he would still answer me (in a very quiet sleepy voice) when I talked to him, which I felt was a good sign.

We were seen pretty quickly since they were expecting us, thank goodness.  He had woken from his sleepy ride and was asking the nurse for food and to watch a movie.  His vitals looked great and the nurse reassured me, while the doctors would need to do the final evaluation, she thought he was probably going to be fine since he was awake, answering questions and watching TV.

When the doctors came in (we had two, separately, evaluate him), they both essentially said the same thing.  The first doctor (more junior) said Callum looked good.  Said he should be fine but they'd like to keep him a bit longer just to monitor him and make sure he didn't have any late reactions (or wasn't in any more pain).

He confirmed Callum got about 2x the dose he should get, but that with pain killers it's a little subjective since they'll sometimes give more or less depending on the patient, how they metabolize, how much pain they're in, etc.  So while unlikely, it also wouldn't be unheard of to give him this much.  And, because the prescription is in liquid form, it would be super hard for him to seriously overdose on it, since the liquid takes longer for your body to absorb.... Anyway - he was just trying to make me feel better, which I appreciated (and did help).  He reassured me that Callum would be ok and that it was probably what Callum needed, to get over the pain.

The second doctor (head of the Pediatric ED) stopped by and within 2 minutes of looking at Callum told me he was going to authorize our discharge.  He said there was nothing more we could do but just let it wear off - and the fact that Callum was breathing fine, awake and watching TV were all great signs.  He told me the amount I gave him was "generous" but not life threatening.... I smiled at his use of the word generous.  He was a good doctor.

We spent a couple of hours at the ED, all said and done.  Callum fell asleep on the ride home and transferred to his bed pretty easily.  I was still a little jittery but finally did conk out about 2:30am or so.  Callum woke up around 6:30 this morning, a little out of sorts but seemed ok and just wanted to climb into bed with us.  He fell back to sleep after a few pats on the back and slept in until about 8:30am.

Due to how crummy the night was, and how crappy he's been feeling in general, I had him stay home with me today (instead of going to summer camp with Logan).  It's probably good that I did, since his pain hasn't subsided any, and he's been writhing and screaming in pain most of the afternoon.  I called in and got permission from the oncology team to give him Tylenol (after taking his temp first), and after about an hour, his little body finally gave in and fell asleep (he's currently snoring by my side). 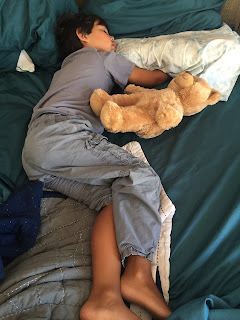 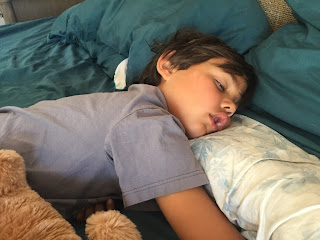 It seems a little odd to me that he's had such a strong reaction this time around (it's never been this bad before).  It's been a real challenge to get through each day like this.  I'm just so thankful that this is our last round of Vincristine, and my heart really feels for any of the parents who have had to deal with this sort of crap after every dose they've received!  :(

Just when we think we're out of the woods and almost done - yet again - something like this reminds me how awful this whole ordeal has been.... and how awful it is for any family to have to deal with.
Posted by Mama Bree at 4:49 PM

It's not fair! Life is not fair! But you are one of the best mom's ever!!!! Tell Ito to get down there before he reports on Monday. Callum needs him. You need him. Callum can whoop him at a game. That will make him feel better, Callum that is

I am reading these in reverse so I knew he was okay but my heart still pounded for you as I read this one. I am so glad everything worked out. Xoxoxoxoxo.