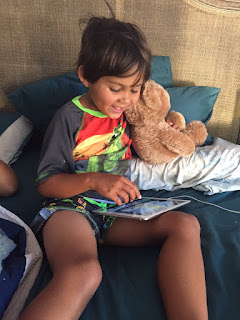 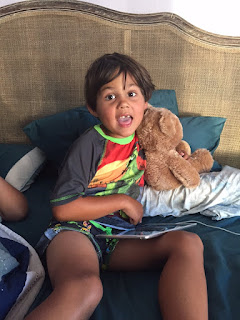 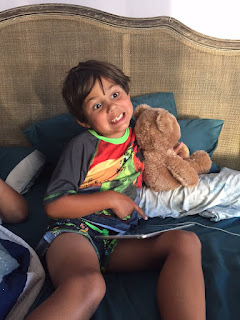 Well, after that nap I spoke of in the last post, Callum woke up in severe pain again. :(

He screamed for an hour straight and nothing I did to try and relax and calm him down seemed to help. (Remember, it was just two hours before I had given him Tylenol, so I couldn't give him anymore). Frankly, he shouldn't have been in that much pain still, only two hours into his Tylenol. :(

It was nearing 5pm, which meant the clinic would be closed soon, so I called, and kept calling, until a nurse finally answered. ;-)

They discussed our situation and decided to write us a prescription of oxycodone (yep, still getting over my massive blunder from last night and it's back to haunt me today!). :/

They could only write the prescription out to the hospital pharmacy, which was a drag. So I loaded a screaming crying Callum into the car and we drove to the hospital to pick up the new prescription (thankfully, we have awesome neighbors who took Logan to swim practice so I could stay home and manage Callum).

The prescription wasn't ready when we got there which was irritating, to say the least, since I was carrying a 50 lb moaning child in loads of pain (and the clinic had assured me it would be ready by the time I got there). His legs have been hurting him so bad that he hasn't been able to walk very far (thus, me carrying him). :(

So, we sat in this tiny little pharmacy, which is next to the front door of the hospital, me holding him and patting his back and shushing him to try and relax, all while he screamed in pain, kicking and punching and holding me and burying his face into my chest.

It was horrible and gut wrenching.

Everyone looked at us with the most pitiful of faces.

The pharmacy finally finished up our order. I hustled us back home as quickly as possible, and the minute we got home, I gave him a dose (of the right amount - yes!). :)

About 30 minutes later, I could hear him laughing with Logan (who had returned home from swim practice). The two of them were cuddled on our bed watching shows on their iPads and chatting as if he hadn't been in the most excruciating pain just an hour before. I asked him how he was feeling and he said his jaw still hurt a little but his legs felt much better. Phew!

Another 30 minutes rolled around and I could now hear him giggling hysterically and uncontrollably. A little too drunk on whatever he was watching, it seemed. I checked in and asked him how he was feeling.

He said, "my legs are tickling!!" And then started to giggle again. Then he said his arms and mouth were tickling too and he asked me to make it stop. :)

He wasn't crazy about the tingly feeling, but couldn't help giggling, which also frustrated him a little. I explained the medicine was doing its job, and finding all of the little painful spots in his legs and arms and face and tickling it out of him. He seemed to like that idea and gave me a big grin.

While I'm not crazy that my kid is loopy high, I'm much happier (and relieved beyond measure) that he's feeling better and not in anymore pain. Plus, I really missed his laugh and goofy smile. :)
Posted by Mama Bree at 11:46 PM