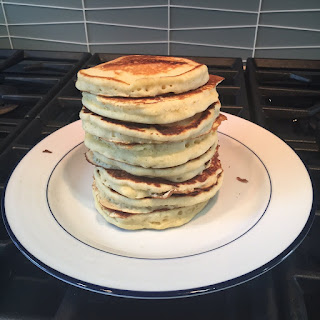 I feel like I'm getting better and better at making pancakes - since the fluffy soft texture soaked in syrup is about the only thing Callum has been able to eat/tolerate. (Interestingly, it's his favorite breakfast food! 😉)

I spoke with his oncologist yesterday because this unrelenting pain has been so unusual and new to us. I know it's not unusual for many - but since Callum has never had this reaction before I wanted to double check and make sure this was all ok. Sadly, it's not unusual. Our doctor explained each time, your body can actually react differently - so having these strong side effects, when he hasn't had them before, isn't unheard of. 😩

The steroid plus vincristine combination also makes it worse - both in terms of the pain Callum's body is dealing with, as well as the emotional hold that the steroids have on him. It just magnifies the horribleness of the situation and makes him feel like crap.

I explained to our doctor that Callum has also been really upset with being extremely hungry, yet his jaw pain keeps him from eating anything. Our oncologist exclaimed "Oh jeez - that's just torture!"

So, he asked me to pull back on the steroids - we're supposed to give him 2 doses a day - but he wants me to reduce it to 1x a day and then just spread out the remaining doses we have left across additional days (so he'll still get the same amount he's supposed to - we're just hoping it'll be less severe each day).

And, we discussed possibly holding off on his next vincristine push, which he's supposed to have on Thursday. I wasn't as keen about that - we've come so far, he's done so well, and I want to make sure we continue to stay on top of his treatment for the entire program - but our doctor explained, if he's in so much pain that he can't walk (which has been happening), they may decide to withhold. I said ok fine - let's see how he's doing on Thursday then....

So far today has been better in general. See my next post for our "light at the end of this crappy vincristine tunnel". ;-)
Posted by Mama Bree at 11:13 AM