Last Thursday (the 7th) and last night (the 12th), Logan competed in two more swim meets.  Given everything else I've been juggling with Callum, I haven't had a chance to mention it - but I really do want to - because Logan has been doing so great!

But before I get to the meat of Logan's meets, I'll post a couple cute pics of Logan's cheering squad: 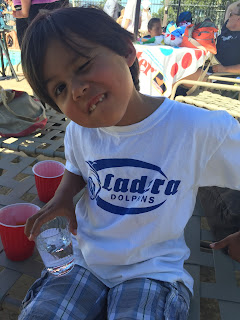 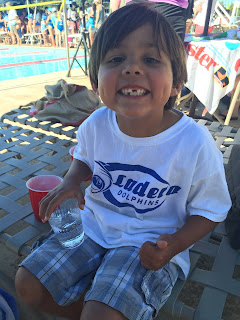 For last Thursday's meet, Logan had decided he'd enter into TWO events this time (for his first meet, he stuck with freestyle only).  He competed in freestyle again, and this time, by his choice (!!) breaststroke!  I was surprised by this, since I assumed he would have gone with backstroke as his second choice, but I definitely didn't question it - I was just so happy to see he was not only up for going back to another meet, but adding another event onto his list too!  :)


He really struggled to finish his breaststroke event, but he stuck it out and made it!  I was beaming with pride - I know how hard it is for him to get out there and do the races on his own like this - but it's such a fabulous experience and I'm hoping it'll continue to make him stronger (in mind and body). 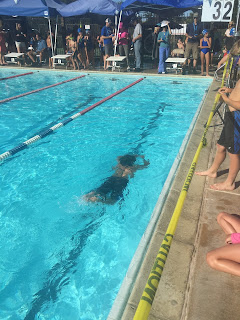 During his freestyle event, he was leading for the first half, but gassed out for the second half and ended up placing fourth.  I mentioned that to him - and he was surprised and amazed that he was in the lead for half of the heat. 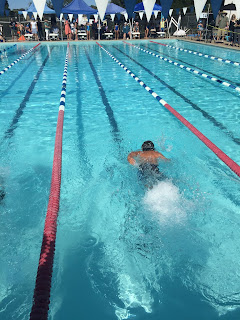 And then it hit him, "So, you mean, it's my own fault, for not getting 1st place?"  I smiled, looked at him and said, "Pretty much."  Which may sound harsh, but I like that the wheels are churning and he's understanding that he has what it takes to win, and with just a little more effort, he can win.

Frankly, it's what I like about swimming anyway.  You can't really point fingers or play the blame game - it's just you racing a clock.  That's it.


Fast forward to last night's meet - where, sadly, Callum was feeling like total crap.  It was really hot out which wasn't helping things and because he was feeling so crummy, he wasn't up for running around and playing with his friends like he normally does.  It was going to be a pretty long evening for him - but I didn't feel like I could leave.  I really wanted to support Logan and I had also committed to volunteering during the meet (awhile back when the season started, of course).

Luckily, my Dad was with us, so just before the meet began, he took Callum home.  It was a bummer for my Dad, since he drove up to see Logan race, but he was also up to help me out with Callum, and we both could tell it would have been awful had we kept him there.


Logan chose to compete in freestyle and breaststroke again - and he did amazing!  Before the meet, I had talked to him about how he could easily shave off several seconds of his time, and become much more competitive in his heat, if he didn't take so long on his side breaths.  I showed him how he can find a rhythm with his arms and should just breathe in between those beats, but not slow his arms/rhythm down.

So, when it was time for him to swim, I reminded him about what we had discussed and practiced at home - and lo and behold, it was a neck and neck race between him and two other guys.  He ended up placing third but MAN, it was so exciting because it was so damn close.  He shaved off a little over 4 seconds from his best time and was literally beaten out by 0.13 seconds from second place.

So, the chat we had today was about that last minute reach and stretching to the end wall as fast as he possibly can, since that can make all the difference when placing.  ;-) 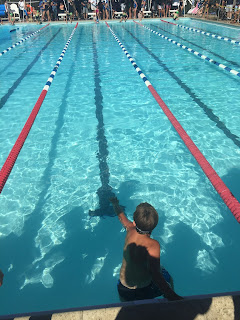 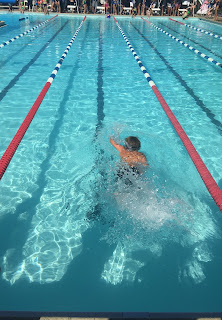 His breaststroke event was also incredible.  Before this event (and the freestyle event), I prepped him with his competitors' times vs. his own best, so he knew what he was going up against (which he really liked).

He had only ever competed breast once before and his time was really slow - everyone else in his heat was a good 35-45 seconds faster.  So, for this event, our game plan was to improve on his arms, to try and pull through the water faster (in last week's event, toward the end of his race, he was hardly even using his arms anymore he was so tired).

His goal was to get a better time than last week - and boy did he ever!  He still placed last in his heat, but he sliced off an entire 14.1 seconds from his last time.  Incredible!  I couldn't have been more proud - and he was really pleased with his performance as well. 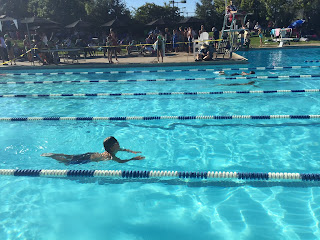 All in all, an awesome meet (both times!).  We have one more meet left in the season (next week) before the championships meet (which I'm sure he won't be participating in, but I think we'll still try to go to, to cheer on the team).

The summer is flying by - but we sure are enjoying it!  :)