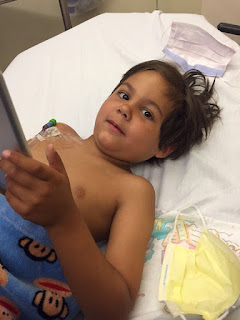 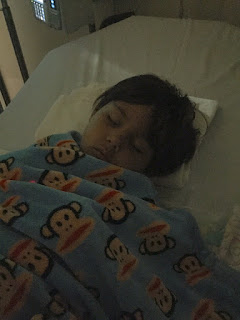 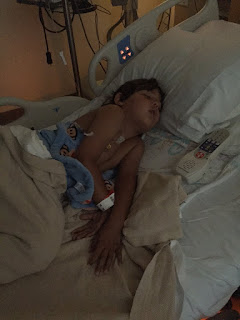 Last night, out of the blue (and I truly mean out of the blue - no other symptoms presented all week or all day yesterday, Callum spiked a fever. He was miserable and sooooo so very tired. :(

After getting permission from the on-call doc, I have him some Tylenol at about 3am and then we headed to the ER. They ran the usual blood work and unfortunately, when his counts came back, we found he was neutropenic. Which meant we couldn't go home. :(

So, we hung out in the ER for awhile while they gave him antibiotics and fluids and waited for a room to be assigned. We finally got to our room around 7am, ran through more vitals, exams, talking to the doctors, etc before Callum (and I) finally passed out at 8am.

(The first pic is from the ER, when the Tylenol had finally kicked in and he was starting to feel a little better. The second pic was a couple of hours later in the ER where he was trying to sleep off the fever that had come back, and we were waiting for our room. The third pic was from about an hour ago, which I snapped really quickly before heading outside to say hi to Jon and Logan.)

He's still sleeping now, but I can tell he's feeling much better. He's not moaning or squirming restlessly around in bed but actually sleeping soundly. Every hour or so the nurse stops in to check his vitals and his fever has come down to the 99* range, so at least that's a good sign. But now that we're here, we have the dreadful wait of count recovery which, as we all know, can take FOOOOOORRRRREEEEEVVVVEEEER.

So here I lay, catching up on Facebook and watching my son sleep. And cursing myself for being so bold as to think we wouldn't have to deal with another hospital stay before the end of treatment.

It's like the universe is sending me a big F-YOU and telling me "Don't you dare get too comfortable." :/
Posted by Mama Bree at 11:40 AM

So F***** it back. Darn could see the finish line. Maybe I got too cocky
Give him our love. And you know Ito will stay. Just say the word