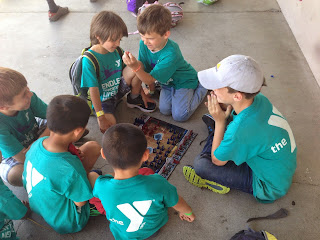 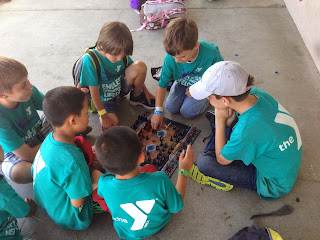 Logan made Callum and I hang around for "just 5 minutes" (about 20), while he played some strategy board game with an older kid (Logan says he's in 6th grade, not sure he's that old, my guess would've been about 4th). Several other boys circled around to watch while they played.

Logan lost, but miraculously didn't get upset at all. :) Instead, he told me it was a hard game and asked me if we could buy it so he could practice. I almost bought it on the spot for that comment alone - we've been trying to get him to understand that he won't ace everything the first time around, but that he will eventually get good at something if he just works on it and practices (a tough concept to understand and accept for the ultra competitive). ;-)

I was also happy to see he's made several friends at this camp - since I decided to enroll him at the Y for a few weeks so he could hang out with Robert (who's in the same camp), but wondered if he'd branch out at all and make other friends or not while he's there (it's always hit or miss with him on that front)!
Posted by Mama Bree at 8:20 PM