You did NOT just do that! 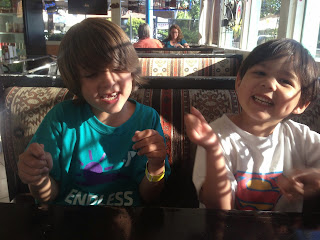 There was a 7 yr old boy sitting in the booth behind me, talking to Logan. They were sharing their names, grades, ages. You know, typical stuff.

The boy then asked Logan how old his little brother was - and Callum, who was BEYOND excited to be with his big brother after a long day apart, and simply wanted some special Logan time, was chatting nonstop about who knows what to Logan - so Logan thumbs in Callum's direction and rolls his eyes while making the "crazy" sign with his other hand (circling his finger as it points to the side of his head), all directing this to the kid behind me as if to say "yep, my brother is a weirdo and I'm too cool for school."

My jaw dropped as I saw this - you did not just do that to your little brother! Cut it out now! I snapped at him (I was shocked - it's the first time I've seen him act too cool for his little bro). He stopped, but not before he snuck a sly smile back at me.

Thankfully, Callum had no idea what took place in those split seconds beside him. And, minutes later they were best friends, playing and singing and dancing together as always which made Callum just pleased as punch since he really did miss his big bro today.

I'm not sure if I'm ready for the bratty teen years, if this is the foreshadowing of what's to come! :/
Posted by Mama Bree at 7:39 PM