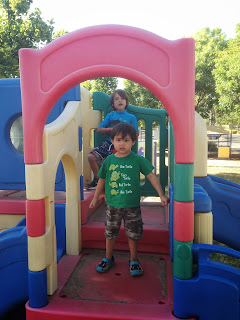 Today Logan headed back to the boys' old school for summer camp. He had a fantastic time once he met up with and remembered a few of his old friends.

When we came by to pick him up in the afternoon, Callum was very excited to see his old school. However, he became super shy when I took him by his old classroom and wouldn't talk to any of his teachers. :)

I told them he'd probably warm up and break out of his shell after seeing his brother, which he did. So we headed back to Callum's old class and hung out on the playground for a bit before heading home. I'm hoping the more we make it part of our routine, he'll look forward to the visits with his class.
Posted by Mama Bree at 6:31 PM