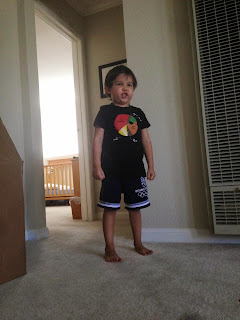 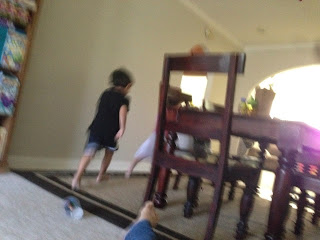 Yesterday was a big day! After dropping Logan off at school, Callum and I headed up to the hospital for his weekly blood check. Since he was neutropenic last week, I was expecting the same. But hopeful that maybe his counts had risen enough to get him out of the neutropenic state - mostly because it would relax our "lock down" status but also because yesterday's results would tell us whether we'd make his next hospital admission (Monday) or need to delay. And, as much as possible, I'm hoping we don't delay anything with his treatments.

Anyway, after a LONG time of waiting, we finally got the ALL CLEAR! I was surprised but so happy to hear it. It meant we could head over for a play date with the Cables family after the hospital visit (something I had tentatively planned with Jill but hadn't told Callum - just in case). And it also meant we were all clear for his LP and high dose methotrexate (with hospital admission) on Monday. Yay!!

So after we finally left the hospital, it was close to lunchtime and we were pretty hungry. Jill ran out to grab donuts but Callum was also in the mood for bagels so we stopped to grab some of those as well.

Callum hasn't had too many play dates so this was pretty exciting for him. Plus, ever since we had seen the Cables over Easter, he had been asking to visit them at their house. :) The kids had a blast playing together. I tried to capture a couple of pics of them running after each other around the house but my slow phone camera is no match for those rambunctious kids! Jill reminded me I could've grabbed a video. Darn. Oh well.

The first pic is of Callum acting out as (he announced) a Robot Zombie with Laser Eyes. He would chase Trent (Amelia joined later) around the house as "the bad guy" while they all laughed and squealed with glee. The second one is my very slow snap of them running past me. ;-)

After a fun afternoon we finally parted ways, since we needed to get back home in time to pick up Logan from school (barely making it, since I had forgotten about rush hour traffic - ha!). Logan's school had an "exhibition night" (what we used to call Open House I think?) where each class could show off to their parents what they've been learning about. So the kids sung a couple of songs about mammals and then answered a bunch of questions from their parents (given to us in hand outs). ;-) Logan enjoyed this quite a bit but mostly he liked showing Callum his classroom and introducing him to his friends. :)

Soon the boys got bored of the class, so we headed outside and they played with a few other kids on one of the smaller playgrounds. I was so happy to have them out and playing and having fun that we stayed quite late, which meant Callum was exhausted and couldn't walk (sometimes he has bone pain from the leukemia, that bothers him). So I had to carry him on my back, a very long walk back to our car, but I didn't really care.