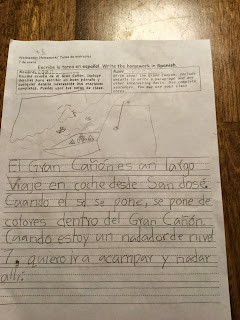 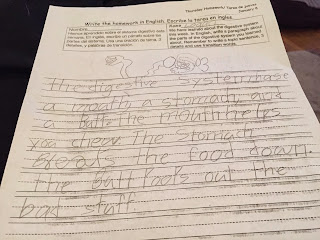 Logan is doing much better with his writing assignments lately. It's amazing what a little dedicated focus time will do. ;-)

The first pic is of last night's homework, where he had to write about the Grand Canyon in Spanish. He composed his writing in English and then I helped him translate (he definitely doesn't know Spanish this well yet!). What was funny to me was his total lack of interest when I first asked him about the Grand Canyon. So, I showed him some pictures, so he could realize how massive it is. We looked at the dam and Lake Powell - which he was amazed by. I told him about a trip our family took to Lake Powell when I was a kid, about how we rented a house boat and camped on the beaches each night and jumped off rocks and swam in the lake each day. He immediately decided that's what we should do (and thus his inspiration for this assignment). ;-)

Tonight's homework was entertaining because he had retained quite a bit about the digestive system and was thrilled he could write (and say over and over) "butt" and "poop" as a part of this assignment.