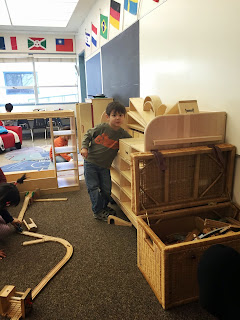 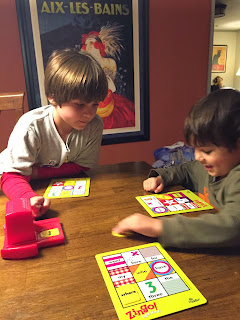 Earlier this week, I felt like Callum was struggling with his return to school, after being out for so long. He seemed sensitive to any little thing and was prone to sobbing uncontrollably over the smallest of things. However, I think he overcame that adjustment, as he not only had a great day at school today, but it took me quite a deal of patience and bribery to tear him away, come time for pickup, today. :)

That progress continued through the evening, where Callum passed another big milestone - and swallowed his first pill on his own!!

For the first several months, I have been crushing his chemo meds and mixing them with water for him to drink. Just recently, we moved to him chewing the tablets instead of crushing and mixing, which he has been doing great with, but hasn't particularly liked.

Last night, he informed me he'd like to try swallowing the pills whole next time (meaning tonight). I said sure, not really crediting my son for his abilities. However, I did remind him about it tonight, just to see what would happen. And sure enough, with a little coaxing and a lot of resolve, Callum swallowed the pill, all on his own. Soooooo cool. :)

Callum has recently been very curious and inquisitive about the subject of death. At first he was also pretty emotional and sad by the topic but I thought that might be the combination of his recent steroid kick and perhaps young age. But I did begin to remember and realize that it was about this age in Logan's life, that Logan had asked us a million relentless questions about death too. So, I've done my best to answer Callum in the same straightforward and honest method that I gave his big brother a few years ago.

He has, over the last few days, become less and less upset by the topic, but no less curious. And, he still doesn't grasp the topic entirely, of course, but you can tell he's tossing and turning and digesting every tidbit of information we give him, each time.

This morning, as we drove to school, he announced to me that, "I'm going to live longer than all of you guys."

He has come to this conclusion, naturally, because he is the youngest in our family and has learned MOST people die, eventually, of old age.

But when your son, who was diagnosed with leukemia not even a year ago, consciously, and subconsciously, makes a statement like that....

Well, it really does take your breath away.

We have such a tremendous fighter on our hands. Most of the time, he is blissfully unaware of this fact. Perhaps someday, he will realize it. But every day, I am thankful for it.
Posted by Mama Bree at 11:58 PM