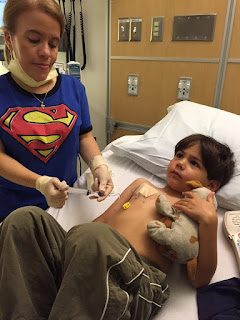 Facebook has this cute "Memories" feature where it'll remind you of the posts you made "on this day" X number of years ago. So, 5 years ago today, I posted that I was waiting for my baby (Callum) to get out of ear tube surgery.

I thought it was funny that today, I was waiting for him to get out of his LP procedure.

He's always been such a trooper - and just like 5 years ago, he did fantastic today.

Today was the 7th, of 8 doses, of IT (intrathecal, or lumbar puncture) methotrexate required during his maintenance phase. He'll get another in 12 weeks, which will hopefully be his last!

His procedure went super fast today. I watched him go under, as I always do, then walked out and caught our nurse to catch up with him on next round of meds, our ER drama, vacations we've both been on in the last month, and life in general. It was probably no more than 15 minutes later, that they wheeled a little sleepy kid by us, and I surprisingly said Oh! That one's mine! (his head was covered by a blanket but I noticed the little puppy hanging out on top of the bed). :)

While Callum hung out in post-op recovery, I grabbed meds at the pharmacy and made his next round of appointments. After he woke and had a little snack, we were off to his next appointment of his monthly pentamidine (which he also did great in). We were done around noon, so we headed down to the cafeteria to grab a bite to eat before heading home. Phew!

We passed Callum's bus as we were driving home, so we stopped for a few minutes to say hi and chat with his driver, Mr. Fernando, who wanted to make sure Callum was ok (since he wasn't on the bus) and was happy to see chatty Callum waving and smiling at him from the back seat.

We run across this sort of "small-town community" interaction every day. Another example - when the clinic called me last night to let me know what time Callum was scheduled to come in this morning, it suddenly dawned on me (it's pretty embarrassing that I hadn't even realized it until this point!), that I couldn't be at two places at once. So, how the heck would Logan get to school? Jon is flying back later tonight so he's not around. I'd be at the hospital early in the morning (long before Logan's school started) and all day. My parents were actually out of town (they're usually my backups!). Etc etc.

So I decided to lean on the neighbors nearby who have boys that are friends (and same age) with our boys. I texted the Mom, apologizing for the last minute request but could I drop Logan off with them in the morning to hang out until the bus picked them up?

OF COURSE!! She said.

And then when I dropped him off she said Bree, don't ever worry. Someone is always home before, during or after school, if you ever need it.