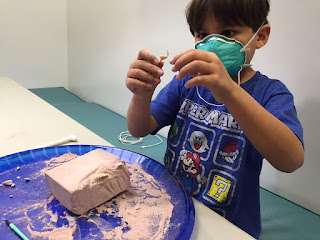 Callum got this "dig up your own dinosaur" kit for his birthday last year, which I had successfully hidden, so that he'd forget about it. I could tell when he got it, that it would be a frustrating activity (it's meant for 8+ yrs), not to mention a royal mess. And frankly, not a good mess for an immunocompromised kid to play in, since sawing and chipping away at a block of plaster would just produce an insane amount of dust and debris in the air. The instructions even mention it'll get quite dusty and to beware. *sigh*

So then fast forward 7 months - we moved, and I had it sitting in a basket with a bunch of other (unused/new) toys I hope to give away - but forgot to put it out of sight. Which means the kit caught Callum's eye, and he immediately locked in on the idea that we HAVE to dig out his dinosaur!!! No matter how much I tried to distract him, or deflect to go do something else, he kept bringing it back up.

And here we are. I let him hack away at it, but only if he promised to wear a mask. THAT'S how bad he wanted to open it up - he was willing to wear a mask! Yeesh.

(We rescued two little forearms of the T-Rex skeleton before we both got tired of trying to dig the bones out - so I've now moved it to the garage (out of sight!) and if he doesn't ask for it in a few days, away it'll go forever. Phew! :)
Posted by Mama Bree at 11:13 PM