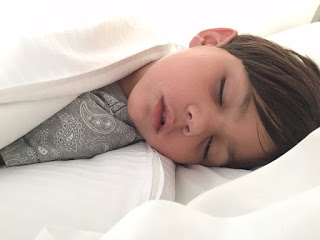 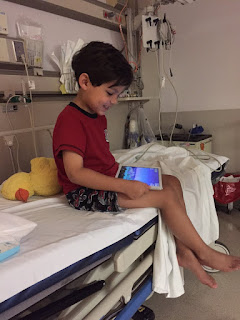 I guess the universe decided we've been having too much fun.

Remember when I said Callum was acting tired and grouchy yesterday evening? The first pic is what Jon sent me, of him fast asleep, after Logan and I left for the beach. When we got back, Callum was still asleep - but it was about 7pm and he hadn't eaten anything for awhile. So we decided to wake him from his nap to have him eat a bit of dinner.

He was pretty out of it, clearly still tired, and felt warm. :( Jon got very nervous - I didn't think he had a fever (yet), but he definitely seemed off. So we ordered room service and tried to get him to drink some juice in the meantime.

But, as the hour passed (and he turned food away with a gag), it was clear he was feeling crummy and his warm body wasn't just from sleeping under the blankets anymore. :( So I took his temp around 8pm and sure enough, he had spiked a fever (101.6). Damn.

(Meanwhile, Jon was pacing the room. Whenever Callum gets sick he gets very worried. :( Being away from home definitely wasn't helping...)

Luckily, I had talked to our oncology team before our trip, and knew there was a Children's cancer center close by. I called the on-call number back home to report the fever, and confirm what I already knew. We had to head to the ER.

Luckily, we had rented a car (literally at the last minute, as we waited for our bags when we had arrived on Thursday - originally we had thought we'd just walk everywhere!) and the ER was about 10 minutes away.

Callum and I arrived about 9pm and by 9:30pm we were in a room, he was examined by a couple of the Drs on rotation, and we were waiting for an oncology nurse to access his port. His temp had risen to 102 by then, so they quickly gave him some Tylenol (thank goodness).

We did the usual with a urine sample, nose swab (checking for the flu and other viruses), and once accessed they drew blood for his CBC as well as cultures. After that, they hooked up fluids for a quick bolus (I asked the Dr if they'd mind - he hadn't been drinking a lot in the afternoon and I thought the extra fluids would help).

He was MUCH more chatty, with lifted spirits, once we got to the hospital. You can see his smile, amidst all this crap, in the second pic. The only thing that really upset him was the access itself - he has been doing SO WELL these days. But this particular nurse, while I'm sure she's accessed hundreds of ports over her years, was definitely a bit more rough in handling him. I could see she wasn't as gentle - and he whispered to me after he had calmed down (he had been balling), that she had pushed into his port way too hard. :( Ugh. I really hate that.

Then it was a waiting game as always. But, by 11:20pm, the Dr came back to report our counts looked good (phew!!) and that we could go home. We were discharged by midnight and back in the car to head to the hotel!

(All of this had me very nervous - if Callum was neutropenic with a fever, they'd have to admit us. And no telling when we'd be able to go home. Meanwhile poor Logan would be stuck here without a way back home, missing a bunch of school, at least until Jon finished his work conference and could take him home I guess. This was all racing through my mind as we sat there in the ER, me trying to figure out the logistics of how we'd juggle it all if we had to stay. So yeah, it was a tad nerve racking and scary.)

We tried to walk to breakfast this morning - Jon carried him most of the way but he was so out of sorts that he finally asked me if we could go back to the hotel so he could rest. We were only a few blocks away but I decided I better cut the trip short - so he and I grabbed a taxi back to the hotel (where he is now snuggled in bed and watching cartoons) and Jon and Logan continued onto the restaurant to have a nice breakfast. :)

The hospital will call us by tomorrow morning if his blood cultures come back with anything. And I need to continue monitoring him for fevers, etc. of course. Any of this would mean we'd need to reevaluate our plane ride home tomorrow. :/ So, we're crossing our fingers and toes that he'll hang in there!
Posted by Mama Bree at 12:33 PM