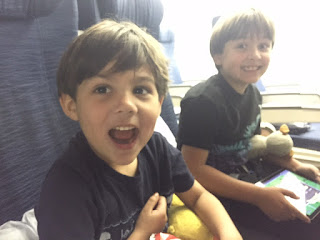 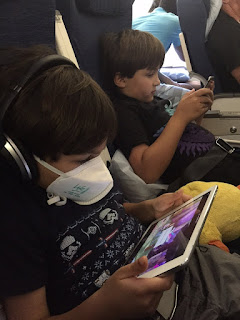 I was nervous about getting to the airport on time yesterday, because there had been a MLK parade down the main street of Waikiki, which our hotel was on, in the morning, blocking all incoming and outgoing traffic. And juggling the boys and luggage by myself was going to take longer than usual (Jon isn't flying home until later this week since he's there for a work conference). But by the time the bellman came to get our luggage, the parade had finished (yay!), so we decided to hang out a bit more at the hotel before heading to the airport.

We had a few lines here and there but because we had arrived early, we got thru security pretty quickly and then still had enough time to grab some snacks at the airport before heading to our gate. The flight was super crowded, and when we flew out most overhead bins were full. I didn't want to chance us not being able to store our luggage overhead (I had one suitcase as carry on since it had Callum's meds and emergency supplies in it), so I told them we needed to pre-board since we have special/medical needs. I'm glad I did! We were able to board long before everyone else so it wasn't crowded or rushed and I could wipe down our seats, get the boys settled in and even had them eating a little snack before everyone else started to board. :)

We had an uneventful, and surprisingly quick (we must've caught a tailwind, the flight was just over 4 hours!), flight home.

Callum passed out on the drive home (he was starting to get sleepy as we were landing) but Logan had a bit more trouble falling asleep, and finally went to bed around 11pm! :( So we'll see how they do in a few minutes when I wake them up for school. ;-)
Posted by Mama Bree at 7:26 AM