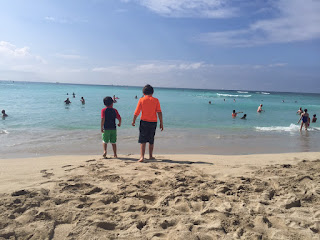 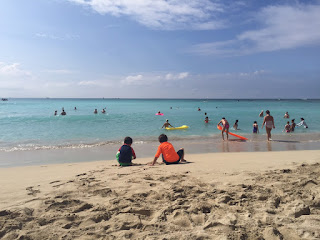 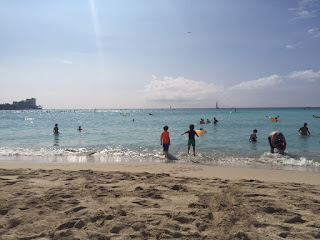 After our yummy breakfast, we relaxed (and digested) back at our hotel room. Then everyone got antsy so we went out to swim! Our plans were to go to the pool, but for some reason the boys were shy and overwhelmed with the number of kids in the pool already (the pool is small but it didn't seem like there were THAT many kids in it - and besides, the beach was obviously a lot more crowded!). So, to the beach we went!

The boys had a blast again. They built sand castles of varying shapes and then decided to play a "jump the wave" game they made up (and which I was able to get Callum in the air on one of these shots!). I then joined them since they really wanted to go out further into the water - as they rode the waves back into the beach, Logan exclaimed, "It feels like someone is using the force (on me)!" :)
Posted by Mama Bree at 7:29 PM