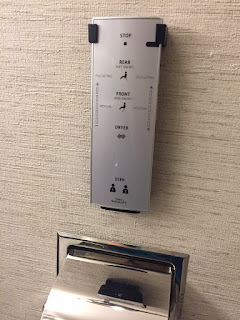 I almost forgot to snap this pic but remembered just as the boys and I were heading out to catch our flight on Monday. :)

So when we first checked into our hotel in Waikiki last week, Callum had to go to the bathroom. He asked Jon what the remote on the wall was for - so Jon showed him the bidet function - while Callum was sitting on the toilet.

And suddenly, a fan was born.

From that point forward, every time Callum was pooping (and sometimes even when he wasn't), Jon and I would chuckle when we heard the spraying of the bidet going off. We'd call in to check on Callum and sure enough he was spraying his butt. ;-) He thought it was the coolest thing ever. He even tried to convert each of us, anytime he saw one of us on the toilet, he'd run in and say, do you want to try the spray on your butt? He'd point to the "Rear" button and explain that one was for boys but THIS ONE MOM, pointing to the "Front" button, this one is for girls!

The other cute things that happened on our trip, which I forgot to blog about, were some of the comments the boys had.

As we were driving to the airport early last Thursday morning, Callum whispered to me, "Did you bring our swimsuits Mom?" - as if I'd forget that?!?

Later, when we were in Hawaii, and talking about the many islands, Callum informed us: "I like Oahu best. But I don't like sand in my shoes."

On one of the first days that the boys tried swimming in the ocean, Logan told me, "Taste the water Mom. It's not that bad!"

And last but not at all least, while riding the waves, Logan told me, "It feels like someone is using the force (on me)." :)
Posted by Mama Bree at 11:07 PM