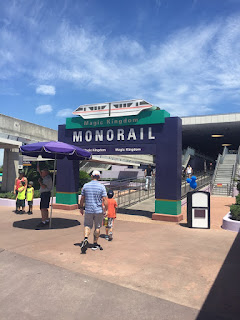 But not nearly as tiring as yesterday!

We all slept in a little this morning and just took our time getting up and out of the Village. Jon had wanted to take the boys to IHOP for breakfast, but by the time we arrived everyone was pretty darn hungry and cranky, and unfortunately the wait was at least 30 minutes (and it looked like closer to 45-60 minutes). :(

So, we called a couple of places nearby and landed on The Waffle House - a diner like chain that I've seen before in my travels but that none of us had been to. It was greasy diner food but more importantly we filled up our tanks before hitting the park.

Of course, all of this meant we didn't actually show up to Magic Kingdom until about 1pm!! Crazy. But we made fabulous use of our time. Since it was so much later, there were zero lines to ride the monorail (or any other mode of transportation) to the main entrance gates so that's what the boys chose (the ferry gave them such a bad taste in their mouths yesterday that they continue to ask us if we *cannot* ride the ferry! LOL)

Once inside the park, we headed for Splash Mountain first. Callum had somehow talked his big brother into trying it out - and didn't want to give Logan any chances of backing out on his promise! ;-) It was also super duper hot so the idea of a water ride helped seal the deal.

Logan ended up loving it so much that we went 2 more times (3 total!) before Jon and I talked them into checking out some of their other favorites. We went on the Pirates ride another time and then stopped at Aladdin's Magic Carpet ride after a quick churros snack break (the boys' fave).

We also decided to stop by the Wish Lounge which was a quiet and peaceful (air conditioned!) place to rest for a few minutes in between all of the hustle and bustle. :) While there, we met a really nice family from Wales (and ended up running into them on one of the rides later in the evening which was fun for both of us)! :)
Posted by Mama Bree at 9:50 PM