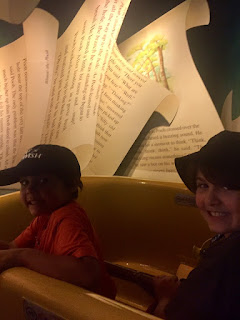 To our surprise, a HUGE favorite of Callum's has been the Winnie the Pooh ride. He talked about it a lot last night and kept asking if we could go back on the ride today. (He also wanted to buy another stuffed animal from the shop - where we land after the ride - so that could have been a contributing factor of the coolness of this ride!)

So we headed back over to catch Winnie and friends again. I was able to snap a quick pic of the boys just before we finished the ride and headed across to the 7 Dwarf's Mine Train!

Yesterday, Callum was gung ho to try the train ride (a small roller coaster ride) - but chickened out when they reached the front of the ride. So, they never made it on. But today, we somehow convinced both boys to give it a go - I think their confidence was boosted some by their successful rides with Splash Mountain and Pirates.

So, we four headed all the way to the front and about to board the train roller coaster, when Callum got cold feet once more. :( So, he and I stepped off and backed out but Jon and Logan (surprisingly!) stayed on!

We hung out near the exit to wait for them and once they got off, Logan told Callum it was amazing and so fun!! And just like that (with a few small pep talks about how many drops and turns there were etc), Callum decided he wanted to give it a go - but only if he could ride with his big brother. ❤

He enjoyed it SO MUCH that we went back a second time (3 for Logan)!! And I'm pretty sure they would have gone a few more times had we not talked them into taking a break so we could grab a snack (for poor Mom who was now suffering from a pretty bad pounding headache - ahhhh, the things we do for our kids, amirite??) ;-)
Posted by Mama Bree at 10:12 PM