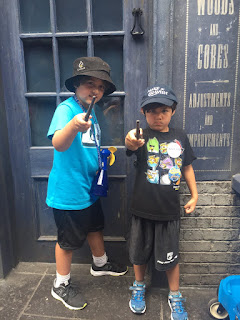 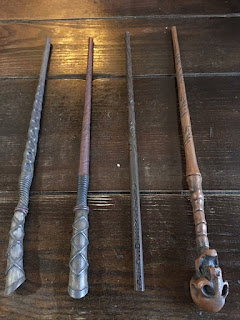 Once we entered the amazing Harry Potter world, we had to find and visit Ollivander's Wand Shoppe.

Logan and Callum were chosen as participants for the Ollivander's Wand Shoppe "A wand chooses the wizard" experience. Logan made the drawers rattle and Callum called down lightening on innocent patrons before they were matched with willing wands.

I was caught quite off guard by the experience (which, btw, is usually only for one lucky stranger in the crowd, not two) - the wands which chose each boy did so because they've been through such rough times and yet, have survived with amazing courage, strength and companionship.

Can you guess which wand chose which wizard? :)
Posted by Mama Bree at 9:40 PM