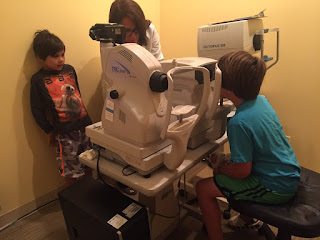 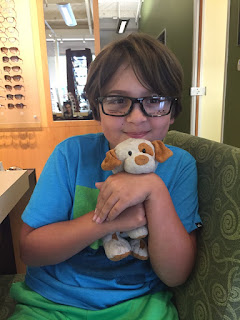 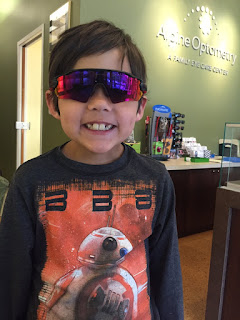 Logan had his first eye exam (with an optometrist) today. I had suspected he wasn't seeing clearly so I had the school test him last week and sure enough, his left eye didn't pass the test....

He did great in his exam today, except when it came time to dilate his eyes. He lost his cool and would NOT allow the poor doctor to put drops in his eyes to check them. :( We tried sweet talking him, not sweet talking him, showing him what to expect (by giving me eye drops first), etc but he would NOT budge. So, we've gotta go back to do that, after I've had time to convince him it'll be ok :(

Afterward, we met with an optician to find him some cool new frames. After a few different ones that she had him try for size and fit, he decided these would be it!

(Callum, never wanting to be left out of anything, told me he really wanted these sunglasses he had found - ha!!)
Posted by Mama Bree at 10:09 PM