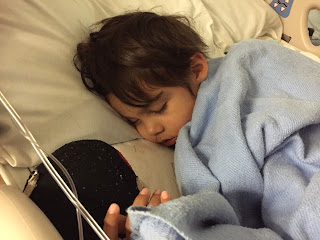 Today has been rough for poor Callum. He was complaining of nausea and back pain last night and this morning. Unfortunately, he threw up (everything!) after his two meds this morning. :( I could just tell he was off.

One of the meds is a new antibiotic for his C-Diff infection that he's been getting via IV up until now but they'd prefer via mouth so it hits his gut quicker. However, that one tastes horrible apparently and he just can't keep it down. :(

We tried again another hour later and immediately he threw it all up. So, I convinced the drs to put the order back on IV, since I argued at this point, something is better than nothing and I could tell he would continue to vomit if we continued to try. :(

I also had the nurses give him some Benedryl to help with the nausea (he's getting Zofran around the clock but it seemed like today he needed some extra help), but to also help conk him out since he woke up pretty early and was just a little ragged most of the morning. Thankfully it hit him pretty fast and he has been napping since. I hope he'll feel better after resting (and now that we've stopped the crappy meds for at least another day or so).

Unfortunately, his counts are at an all time low (his ANC is 31, so essentially he's got nothing to fight all this crap right now), and sadly, there's nothing to do but wait it out and allow his body time to start producing good fighting cells again. It's stressful and exhausting, but I know we'll get through it eventually.
Posted by Mama Bree at 2:32 PM