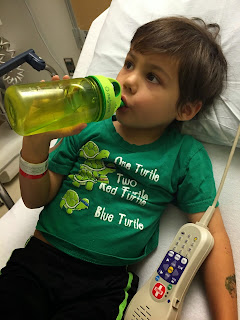 Well, little Callum woke up last night a little after midnight complaining of an earache. I thought maybe it was just some congestion or something due to his cold so we got some Benedryl to give to help him sleep - but before we could give it he threw up, poor guy.

This continued throughout the night. Several episodes of throwing up and miserable terrible screaming pain from his ear. :( Thankfully, we could give him Tylenol once we spoke to the on call doctor and confirmed he didn't have a fever. But even that (nor some stronger painkiller meds I had for him) seemed to work very well. He, Jon and I probably got a total of 3-4 hours of sleep (in spurts of 20-30 minutes) all night. :(

So once the sun rose and businesses started opening, I called his pediatrician and brought him in right away to check out his ear (knowing it would be faster than driving to the clinic at Stanford). Sure enough, he had a nasty ear infection (and a mild grade fever of 100.6 had started to develop). :(

We got a dose of antibiotics in him and he would catnap in and out of sleep on my lap on the couch. When I could, I'd sneak away to pack our bag and check in with our nurse, Carly, throughout the morning. We decided she'd get a room in the day hospital for us to come in, since we wanted to try and avoid a trip to the ER in the middle of the night and we both knew he could hit a fever (and stick) any minute. Plus, he wasn't eating or drinking so we thought getting some fluids in him couldn't hurt.

About 1pm I packed up the car and we headed to Stanford. Jon had cleared his schedule for the day thank goodness and stayed home to do a bit of work before picking up Logan.

The drive to the hospital was terribly stressful and long(er than usual), since Callum was on the verge of puking and screaming about his ear pain the entire time. It totally sucked. :(

When we arrived, we were quickly ushered to our room and vitals were taken, where we discovered he had hit another low grade fever (101.1). Ugh. They took blood work for a number of things to check, but the biggest being his counts, to see how well his body could handle fighting this infection on his own.

Unfortunately, he's not well equipped to fight it right now - his WBC is 800 (the lowest he's had yet) and his ANC is 240, meaning he's severely neutropenic. :( So, we are now hanging out watching a movie and waiting for them to make room in the inpatient hospital, since we'll be staying the night.

We will have to stay until his counts recover, and he's fever free for 24 hours. Another wrinkle in all of this is that he's scheduled for a lumbar puncture (with chemo) on Monday morning. Unless he gets much much worse, we will go through with the LP, but that also means (I think), that they'll at least keep us here til Monday (unless he's recovered miraculously overnight and they're desperate to get a bed back).

Jon and I were talking about how we've actually been pretty "lucky" with how well things have gone so far, and that one of these visits was bound to come up soon. Still, it's funny how much you quickly forget about all of the little things while at the hospital - yet now that I'm here again, it's all quickly coming back to me (and I'm sure for poor Callum too).