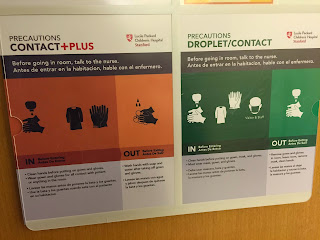 Before, our door just had the green sign on the right, since Callum tested positive for rhinovirus (which is essentially the common cold), but given kids here are immunocompromised, it means we must stay in the room and nurses/doctors need to wear gowns and masks to protect themselves (and from spreading germs to other patients).

However, last night he had a bit of mild diarrhea, which unfortunately tested positive for C-Diff, a bacterial infection in your gut. It's not common for healthy folks because even if you did get it, the good bacteria in your gut would likely fight it off. But when you're immunocompromised and/or on antibiotics that have wiped out all good bacteria in your body, it's quite common to then get C-Diff. It's also very contagious, thus the new red/orange sign on the left, added to our door.

So, we started another type of antibiotics in the middle of the night to fight the C-Diff (I have to admit I was getting pretty irritated with the nurses since it felt like they were in and out every hour last night, but now I know why!).

He's doing well otherwise (and has only had that mild incident of diarrhea so far).

This morning we've been "on-call" waiting for the day hospital to call us in for his scheduled spinal tap (neither his neutropenia nor this new development with C-Diff will delay the chemo for his spine). It's kind of nice since they've got him on fluids and we're just down the hall, relaxing in our room while we wait. However, because we've been admitted, they bumped him to a later time than usual, which means he's getting irritable since he hasn't had anything to eat or drink since dinner last night (which was like 5pm!!). :(
Posted by Mama Bree at 10:24 AM