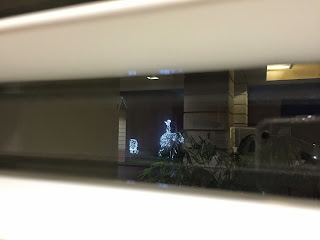 Callum's counts haven't recovered enough to go home yet (in fact today they dipped even lower than before! to 20), although thankfully he's doing much better. Since he's doing so well the doctors and I have talked about going home once we see an upward trend in his numbers (vs having to wait until he's no longer neutropenic, which would be above 500). So now I'm just hoping for his numbers to rise nicely over the next couple of days so that everyone feels like he's finally recovering.

They've also moved him from Flagl, the awful gross tasting antibiotic that made him throw up several times, to Vancomycin. If you'll recall, he's had Vanco before, and got the "red man's rash" after receiving it, but that almost never happens when given by mouth, which is what we are giving him now. They switched since they really wanted to get the antibiotics straight to his gut, to treat the C-Diff more directly, and so they'd feel comfortable that we have a manageable treatment plan going home. So far he's been fine taking it (he doesn't really like any medicine he gives, but he tolerates it and keeps it down), so that's been good. :)

As dusk was approaching, Callum happened to notice some twinkling lights out of our window this evening. Upon giving it a closer inspection, we discovered the hospital has now dressed up the animal shaped bushes out front, at the entrance, with Christmas lights!!

Boy, what joy that brought Callum! He got very excited and told me that even though the hospital doesn't have chimneys, Santa could still bring him presents, because he could just open a door (to get into our room).