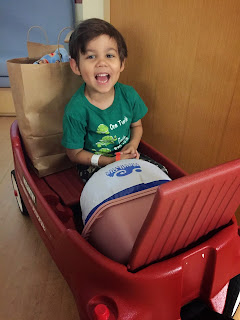 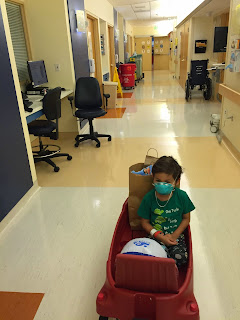 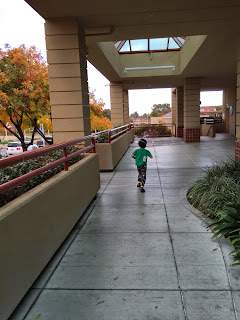 As soon as I got the news I immediately started packing us up. :) I grabbed a wagon from the entrance (there's a lot left out front for people to bring stuff - and kids - in and out). Callum REALLY wanted to ride in it on the way out, so that's what we did! :)

The minute he realized we were outside - he just TOOK OFF running. It was pretty cute. I couldn't blame him one bit.

We have to go back on Wednesday to get his counts checked, in hopes that they've risen enough to start up with his chemo again (when he's neutropenic, they withhold the chemo we give at home).

Since home, I've been unpacking and doing chores and giving Logan and Jon lots of hugs. Callum and Logan have been sharing their latest toys and games with each other and I think it's safe to say we're all glad to be home and a whole family again. :)
Posted by Mama Bree at 4:29 PM