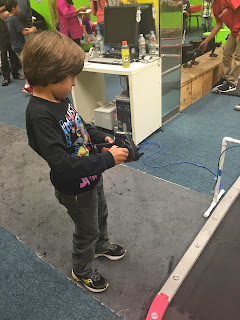 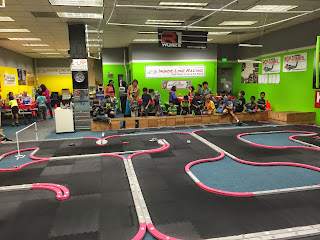 Logan and I went to his friend Haris's birthday party today. It was at this place where the boys could race little remote controlled cars.

The first pic is pretty much what Logan's face looked like half the time he played. It was very hard to control the cars since the controls were so sensitive and the cars went so fast. :)

He did finally get a little better after about 45 min of playing but man, it was frustrating for him, which in turn was frustrating for me since I had to keep calming him down. And then I'd try to help him because he'd ask, but then immediately yell at me about not wanting any help. *sigh*

The second pic is of most of the boys lined up playing. It was a little crazy as you can imagine, but Logan did have a really great time, despite how hard it was to play. :)
Posted by Mama Bree at 6:10 PM