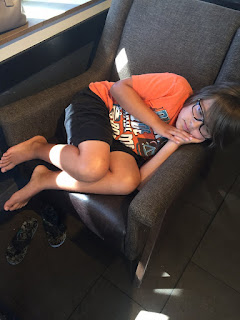 The boys were upset to miss the last day of camp this week, since they've been working hard on programming their own "Pokémon" games. So, we went to camp to pick up copies of their work, and stopped by Starbucks for a bite to eat as well. Here's poor Logan feeling sorry for himself at the coffee shop. :(

When we got back home, I suggested we watch a movie and relax on the couches. I put Matilda on, since we haven't seen the movie yet and they had enjoyed the musical in London. :)

The narrator begins talking, and Logan says to me:

Mom, do you know who's voice that is?

Nope, you're wrong. It's the Lorax.