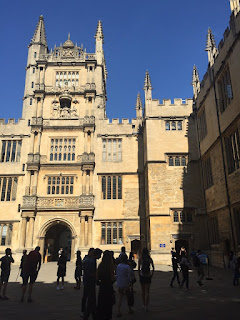 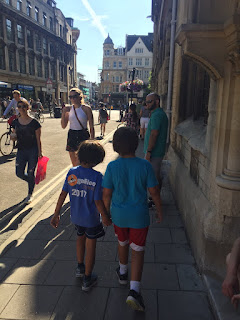 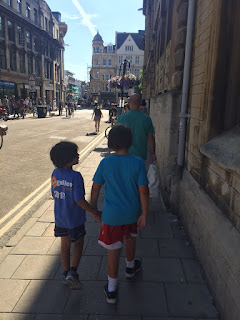 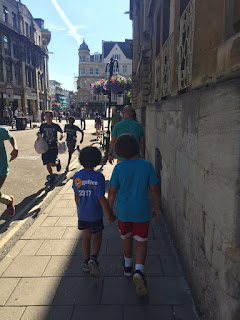 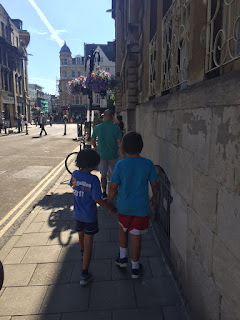 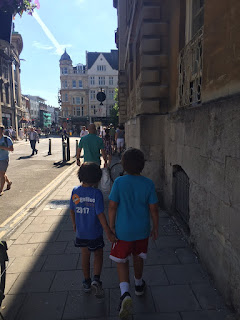 After checking out the Hall, we decided to walk around town and see what libraries we might be able to check out. What we didn't realize was how hard it would be to see any of them!! :(

Most we came across were closed to visitors - when we finally got to the famous Bodleian library, Jon was worried the boys would be too loud and rambunctious for us to go inside so we decided to skip it.

We headed to the covered market instead since everyone was slowly starting to unravel and get pretty grouchy - it was a super hot and muggy day which made the aimlessly walking around town much less enjoyable. I thought the covered market would offer some relief from the sun and let the boys window shop for a bit. We also sat down in a cafe for some milkshakes/sodas to cool off.

While cooling off a bit, I convinced Jon we should head back to the Bodleian library, since it supposedly had some interesting Tolkien related stuff in there.

When we got there, the ticket booth was closed - ugh!! And wouldn't open back up for another 20 minutes. So we hung out waiting the 20 minutes - then when the gal finally showed up, she told us all guided tours were sold out and if we were interested in Tolkien we should go across the street to the Treasury, to check out his stuff. So we said ok sure.

We walked out looking for a building or signs marked "Treasury" and found nothing. We walked up and down the blocks staring at our map, staring at maps posted along the street, and finally talking to a local walking by. Nothing indicated a "Treasury" to check out.

The local told us to try another library that might have some interesting things to check out (but she had no clue what the Treasury was). So we headed there - the guards told us they'd be closing in 10 minutes - no problem we're just here to check out some Tolkien artifacts - we walk inside (the WESTON LIBRARY) and guess what sign we see INSIDE THE WESTON LIBRARY?

So we go great! We finally found this infamous Treasury!

We head inside and there is a total of ONE Tolkien artifact on display. Jon was super disappointed but thought oh well, I'll at least take a picture so people will know I was here.

And that's when we saw the single sign, next to the Tolkien piece only, saying no photography (photography was allowed for all other treasures!!).

Man. What a humongous let down!!

After that we were pretty much done. So we decided to head out a bit early to find the pub we were meeting Emily and her family at, for dinner. On the walk there, I noticed the boys were chatting away and holding hands the entire time. It was the cutest damn thing ever so I had to snap a number of pics to capture it. :)
Posted by Mama Bree at 4:39 PM