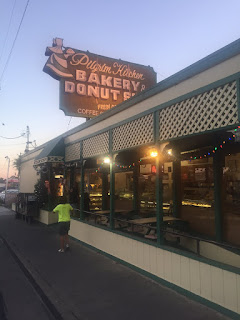 We managed to stay up until about 8pm last night, which I thought was pretty good. The boys complained like hell about going to bed, claiming they weren't tired and wanted to keep playing on their iPads. But I couldn't keep my eyes open and Jon was already napping on and off, so we made them turn in.

Jon and I both woke up around 2:30am, so I let the dogs out, opened our windows (it was pretty stuffy inside the house by then), etc. We both fell back to sleep on and off for a couple of hours, but the boys woke up around 4-4:30am, wide eyed and bushy tailed 😩 so we left the house about 5:30am to check out a (new to us) donut shop. Quite tasty!!