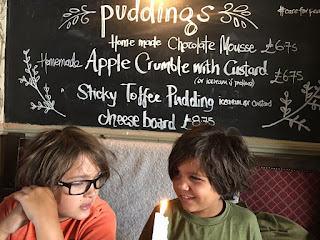 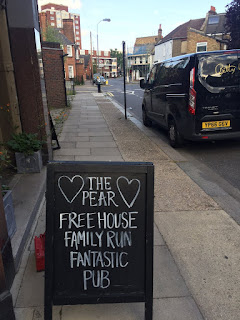 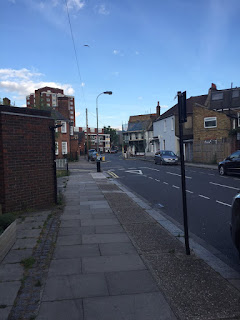 Jon met us at the tube station (closest to the flat we rented), which was fun. We were all pretty hungry since it had taken so long to get out of the airport so we basically just dumped all of the luggage and walked around the corner to a local pub called The Pear Tree.

I took these pics outside the pub to show off the neighborhood - and literally right after taking them, Callum took a huge spill on the sidewalk (he and Logan were spinning each other around, way too much energy and going stir crazy from being on the plane for so long I think).

Callum freaked out screaming bloody murder, so I couldn't tell how badly hurt he was but could see his elbow was scraped up pretty badly (and saw him fall right in front of me - basically face planted on the sidewalk). :( So he and I rushed back to the flat where I had a little first aid kit in my bag - I cleaned him up and we put on Neosporin and a bandaid.

Jon was pretty worried he broke his arm again, so after Callum finally calmed down, we ran through a bunch of tests to check his pain level and range of motion. He was fine, thank goodness! But jeez louise, first hours in London and we were debating whether we needed to run him to the ER. 😬😩🤞🏼
Posted by Mama Bree at 3:57 PM