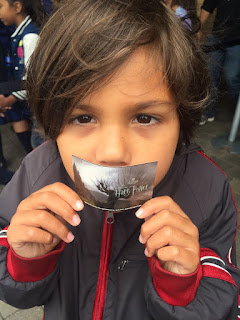 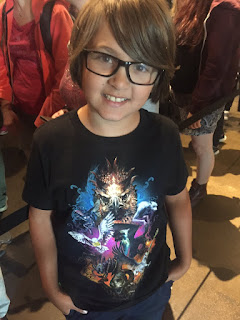 Today was a fun filled day of all things Harry Potter!! ⚡️

But first, our night last night was horrendous. The boys went to sleep around 10-10:30pm, which was late but not awful given they had slept in so late that morning. However, Logan woke up around 1:30am with an upset stomach, and Callum woke up around 2am or so just hungry and wide awake. And so, for the next several hours Jon and I were tag teaming running downstairs to help one or the other, giving back rubs and helping each relax enough to fall back to sleep.

But, neither of the boys were tired. Instead they were wide awake. 😩 Damn jet lag!!

So finally I made Logan go upstairs to lay in bed with Jon in hopes that he'd finally get bored/tired enough to fall back asleep. Jon was pretty much unconscious so he doesn't remember/know when exactly Logan finally went back to sleep, but he did.

Meanwhile I stayed downstairs with Callum who was bopping and twisting and practically jumping up and down in bed he was so wired. ☹️ It was NOT fun, but he finally did go back to sleep (I'm not sure on the time either but I'm guessing sometime around 4am??)

Suffice to say, we were ALL super tired when the alarm clocks went off to get up and get ready for our big Harry Potter day. But, somehow, we all managed to get up, eat a little, get dressed, and head out to find the tour bus location where we were boarding a tour bus to take us out to Leavesden, about an hour out of London, where the studios were located.

But the entire walk to the tube, on the tube, and the walk after while trying to find the tourist office, Logan was just limping along. Poor guy was suffering from an upset stomach due to some spicy chicken he ate last night. :(

Luckily I had pepto bismol tablets with me so we gave him a couple of those and when we finally found the tourist office, I checked in while Jon went with him to the bathroom.

We still hadn't eaten much and Jon and I both needed some coffee. The bus wasn't departing for another 30 minutes so I had Jon and Callum head out to find some coffee and a bite to eat while I hung back at the office to wait for Logan. As we crept up on the departure time, they started calling everyone outside to line up on the sidewalk so they could start boarding everyone onto the bus. Jon and Callum weren't back yet so I was chatting with the gal at the bus/curb, explaining we wanted to board but had two more in our party who'd be there shortly.

While discussing this with her (she was impatient about getting me out of the queue if we weren't ready yet and I was insisting they'd be behind us in just a few minutes since I had just talked to Jon), some random guy was speedily walking, practically jogging, thru the massive mess of a "line" of tourists all edging to get on the bus.

Not paying attention, I'm sure, he bumped into someone in the crowd, which caused him to do a huge fumble and spill an entire ginormous cup of steaming hot coffee all over himself, his bag and, what I discovered split seconds later, my son's back - because Logan immediately started screaming and jumping and running around. 😱

I quickly grabbed Logan's shirt to pull it away from his back/skin. And the driver of the bus quickly started pouring a bottle of water across Logan's back. He was, of course, scared, startled, and very upset. I ushered him as fast as I could, back into the tourist office, to the bathroom area, and yanked his shirt off him.

His shoulder and part of his upper back were splotchy with bright red spots - clearly from where the hot coffee had burned him. I soaked his shirt in water from the sink and proceeded to just press the wet cold shirt on his bare skin. Luckily, it wasn't bad enough to blister and he was soon feeling better as his skin cooled off.

Thankfully, I had brought the kids' jackets with me, so I had him put on/zip up his jacket in place of his shirt and spent the next few minutes trying to blow dry it at the hand dryer until Jon found us and called us out to board the bus (he was outside frantically looking for us since I wasn't replying to his texts or phone calls and one of the two buses was gone and we were nowhere in sight outside!) 😬

Because we were the very last to board, we had to split up (the boys sat together so that was good), but at least we made it!!

All of this is the backstory to the second pic I have posted here - the minute we got to the Harry Potter Studios, I beelined all of us to the gift shop first, and had Logan pick out his favorite shirt to buy/wear, and we had a very happy camper once more. 😊👍🏼
Posted by Mama Bree at 2:37 PM