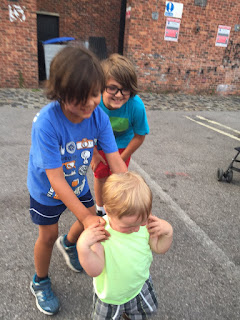 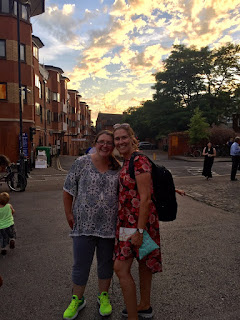 So we finally did get a minor Tolkien fix in for Jon, since the pub we met Emily and family at, was The Eagle and Child, a famous pub that Tolkien used to love to hang out at and apparently do many readings of his work there.

We hung out for an hour or so and we're just about ready to order dinner, when they told us kids weren't allowed in there after 7pm (it was 10 til)!! Damn it!

So, Plan B it was - and we headed to the White Rabbit, a yummy pizza place, just down the street.

The boys were totally taken by Tommy, Emily's son, who's about 19 months old. It didn't dawn on me to take any pics of them playing with him until the very end when we had to say our goodbyes. So this crappy single pic of the boys trying to hug Tommy while he ran for Emily, is all I got. :(

Likewise Emily and I snapped a quick pic of the two of us together but we didn't really spend much time getting pics of anyone. I guess a good sign? Since we were having such a great time visiting and catching up on life. :)

After we said goodbye, we booked it back to the train station with about 2 minutes to spare for our train - only to find out it was delayed and they didn't have an ETA. So we decided to chance it, and took the next train heading out - not knowing how long it would take us to get home but being as tired as we all were, we thought we better keep moving.

It turned out we got on one of the slower trains, so the normal hour long ride took 1 hr 45 minutes, BUT, the express train we were supposed to take, never arrived at Oxford and was eventually canceled! So I'm glad we took the slower train after all :)
Posted by Mama Bree at 4:47 PM