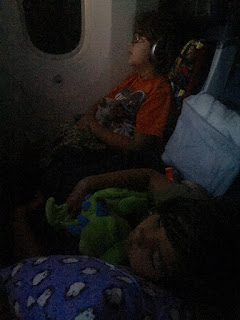 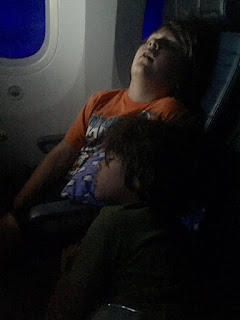 I took a couple pics of the boys while everyone was sleeping on the plane, but then lightened them up so you could actually see them, since it was fairly dark.

I was able to get Callum to lay down across me (and Logan, which annoyed Logan once he tried to fall asleep), so he slept quite well on the flight, about 7 hours!

Logan had a much tougher time falling asleep, unfortunately, but finally conked out, and the two of them would sleep head to head on each other every so often as they moved around, which I thought was pretty cute. 😊

I slept the least; not a surprise I guess. With both of them groaning and moving about so much trying to get comfortable it kept me awake. And, my back wasn't particularly happy with the odd configurations we were sitting in while I'd try propping either boy up to help them get more comfortable. 😩 So, I was pretty exhausted when we finally landed but relieved that the flight was fairly uneventful! And counted it a minor success given they both slept a reasonable amount! 👍🏼

Getting OUT of the airport, however, was miserable. The passport control area was ridiculously crowded, and took us an hour and a half just to get through!

Earlier today I had had a last minute panic attack, realizing (5 minutes before our car arrived!) that I was traveling alone with the boys and had no document from Jon stating he was ok that I was traveling with the kids alone! I'm not exactly sure why it dawned on me then - I think because I grabbed their birth certificates at the last minute, thinking someone might question our different last names. And that got me thinking someone might ask why Dad wasn't around!

Around the time 9/11 happened and passports were required for every little bit of travel, I remember notarized letters from parents being required if only one parent was traveling with the kids.... (perhaps that was never the actual rule and I'm just imagining it?!? But that's what I remember). Anyway, I know some rules have relaxed a bit since then and doing a quick search online I could only find a "you're encouraged" to have a letter but nothing about being required.

Sooooo, all this is to say I was a little on edge every time someone needed to check our passports/boarding passes in SFO because I felt like at any point we may not be allowed to board!

Luckily, that was far from reality. And I'm pretty sure most people didn't even really look at our passports. 😉

Until, that is, we got to the UK's passport control area!!! 😱

Only then was I asked 10x by the officer if the boys were actually my kids, and then wanted to know why we had different last names ("because I didn't change my name when I got married"), and then asked where Jon was, when did he arrive, how long had he been here, was he staying at the same address, and who owns the place at this address anyway? (I have no f'n idea, we're just renting it!)

Finally she let us pass, and after some wandering around looking for our bags that were no longer on a baggage carousel, we FINALLY exited the damn place!!

Pretty much the minute we got off the airplane, Logan was (not surprisingly) a cranky tired hot mess (whereas Callum was Mr. Perky, claiming he wasn't at all tired! Ha!!). It was one of those "How much longer? How much farther? Are we there yet?" Sort of scenarios.

Thank GOD the guy standing in line behind us during passport control was some young Australian gaming kid who struck up a convo with the boys about Star Wars and Clash of Clans and everything else they loved. Lo and behold, the boys were no longer tired and hungry but animated and interested in chatting all things gaming related. Phew!!
Posted by Mama Bree at 3:49 PM