Another day, another blood draw

Callum slept really well last night.  He had some more stomach pains which sprouted up about midnight.  He was running a mild fever but nothing serious.  We gave him some Tylenol (via suppository which he SCREAMED about) and by about 12:30am he was finally back to sleep.  Amazingly, that was all the medicine he had the rest of the night - and - all day today!  He slept until 7am, when the nurse came in to prep his arm for his blood draw (which didn't happen until about 8:30am - I wish the nurse would have let him sleep a bit longer!) and was in a pretty good mood most of the morning (minus the blood draw).

I, of course, will probably never get a pic of him DURING the blood draw because it's so traumatic for him and I'm one of the active participants in the whole ordeal, to calm him down.  But, I did decide to snap a pic of him shortly after when he was no longer panicking, but still a bit miffed about the whole experience. 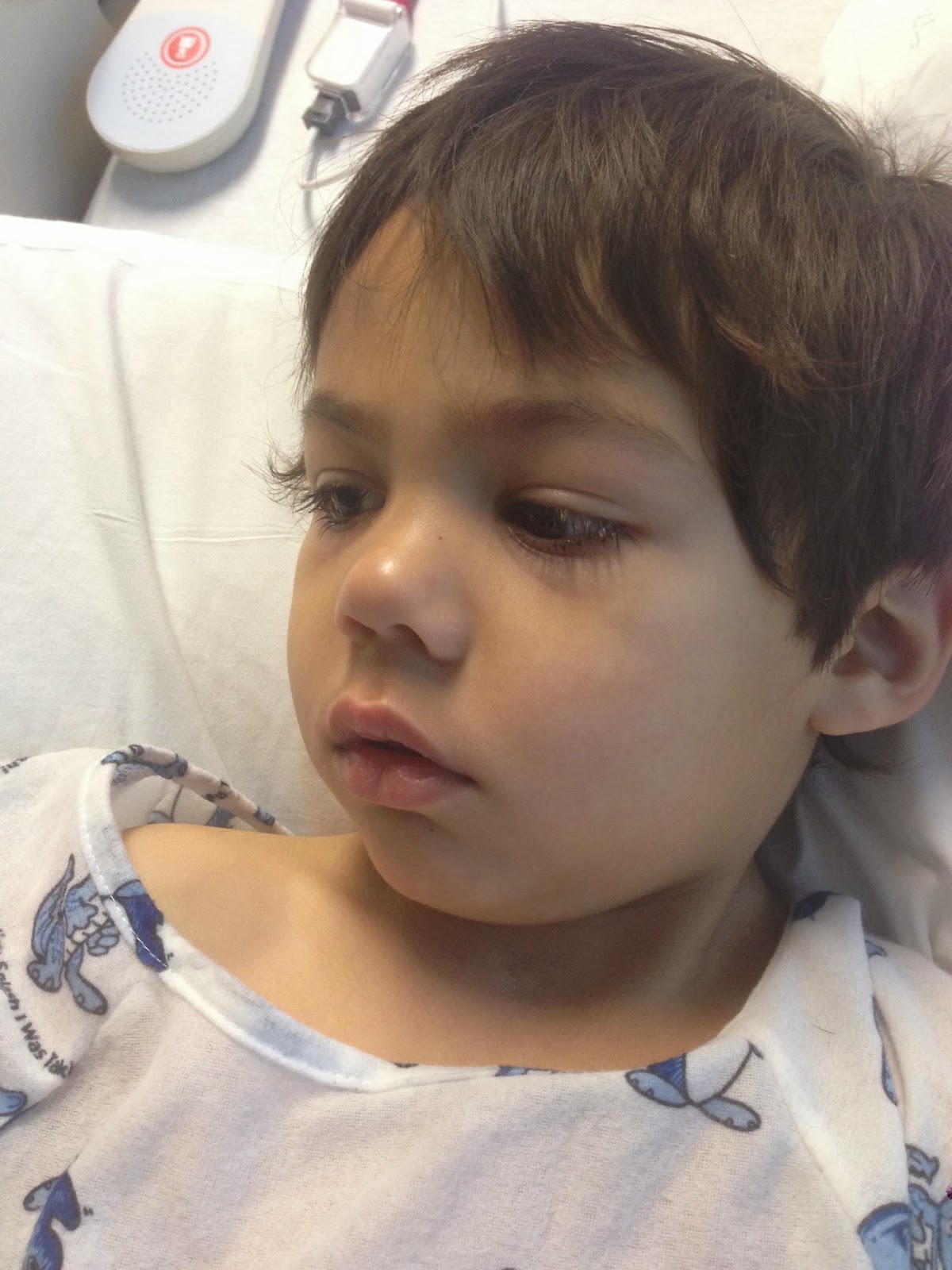 See, not all smiles and dimples all the time with this one.  ;-)

At some point Jon and Logan showed up to visit.  Given Callum is still in isolation, we've tried to be cautious and limit exposure with Logan, but I think it's also good for the two of them to see each other.  And the minute they got here Callum really lit up seeing his older brother, so that was nice to see.  The four of us spent a bit of the morning just hanging out and visiting.

Dr. McCracken (Dr. Abi-Hanna's partner, another pediatric gastroenterologist) made an appearance and chatted with us for awhile.  She felt really strongly that Callum had an E. Coli infection and wanted to make sure we collected another stool sample soon so we could verify it (unfortunately, he hadn't pooped all yesterday, nor during the night, nor this morning).  We decided to go forward with a glycerin suppository to get the sample - even though I knew it would be terrible for Callum, we really needed to run some more tests (we're still not sure why, since the orders from his first stool sample had also requested the lab look for E. Coli, but they never did so we were stuck obtaining a new one).

So, shortly after Jon and Logan took off to run some errands, one of the nurses came in to administer the suppository.  UGH.  My poor baby.  :(   The next hour was "wait" time and sure enough, right on schedule, we had our stool sample.  Never did I think I'd be texting an excited "We have poop!!" to Jon.

One of the (other) things we've had to give Callum (since Thursday night, I believe, although it's hard to keep track!) is probiotics during his meals (twice a day).  He HATES it - thinks he's eating sand - and has gotten smarter with each meal as I try to sneak it on.  Still, I'm usually pretty successful at sneaking at least half the packet in, if not all.

Given his anemia, and his general lack of appetite and pickiness at anything I've tried to feed him, I decided to ask him about broccoli for lunch today.

Hey Callum, would you like some broccoli and french fries for lunch?

During lunch, I'd offer him some bites of french fries in between his broccoli and I KID YOU NOT, he refused.  What about some apple sauce?  Nope.

Instead he kept asking for, and chowing down on, broccoli! (and he didn't even notice me sneaking in his probiotics!  mwahahahahaaa)  And in no time flat, he polished off an entire bowl.  It was so amazing, I had to document it for later.  ;-) 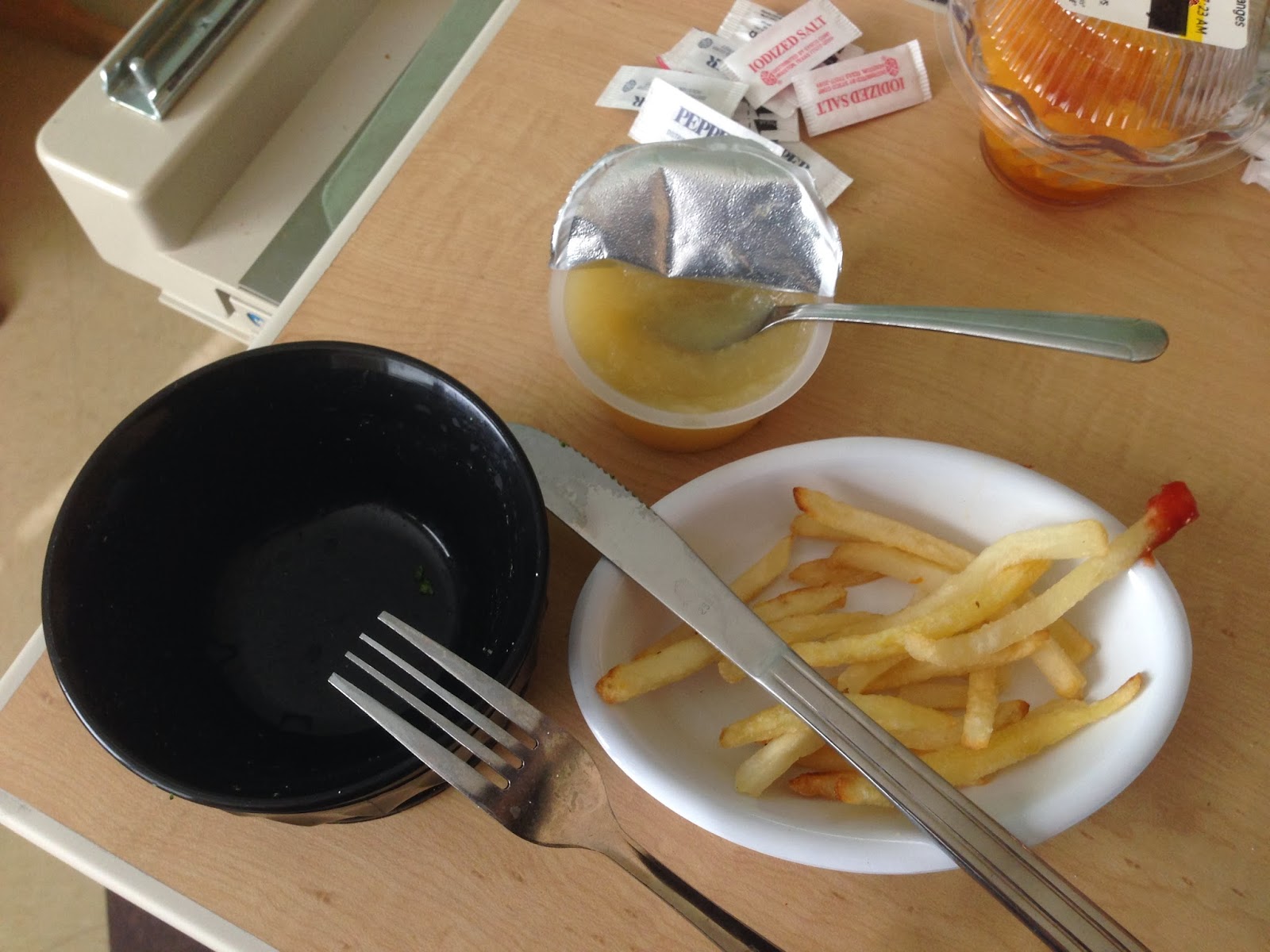 Shortly after our lunch, Dr. Mercado (one of the pediatric hospitalists) stopped by to give us an update.  He said we'd need to stay another night.  :(

While we were still waiting for a few results back from the additional blood, urine and stool samples to determine which viral or bacterial infection Callum had, that's not what was really concerning him.  Callum's white blood count has continued to go down (good) and THANKFULLY we saw an, albeit pretty small, but still, increase in his platelet count (also good).

However, his hemoglobin has continued to decline (bad) and that, plus the earlier dip they saw in his platelets, point to a complication called HUS (Hemolytic-uremic syndrome) that often arises in children after a bacterial infection.  Given the lab work, and Callum's symptoms to date, it was looking like he might be developing HUS, which would be a pretty serious and bad thing, given it's one of the most common causes for renal failure in children.

When the talk of Callum's platelet count entered our conversations, I had started doing some research of my own and HUS *did* pop up.  At the time, I tried not to think too much about it since I didn't want to freak myself out, but it didn't sound so great.  When Dr. Mercado explained it to me (in more detail) today, I wasn't exactly surprised (given it had come up during my research), but it still upset me with worry.

So, given all that, Dr. Mercado wanted to keep Callum another day to make sure the platelets would continue to rise, the hemoglobin would either stay neutral or ideally, also rise, and that his kidney would continue to show healthy (so far, his kidneys are fine).

At some point during Dr. Mercado's visit, while Mama was grilling him with a bajillion questions, little Callum fell fast asleep.  I guess our chat was too boring for him to follow.  ;-) 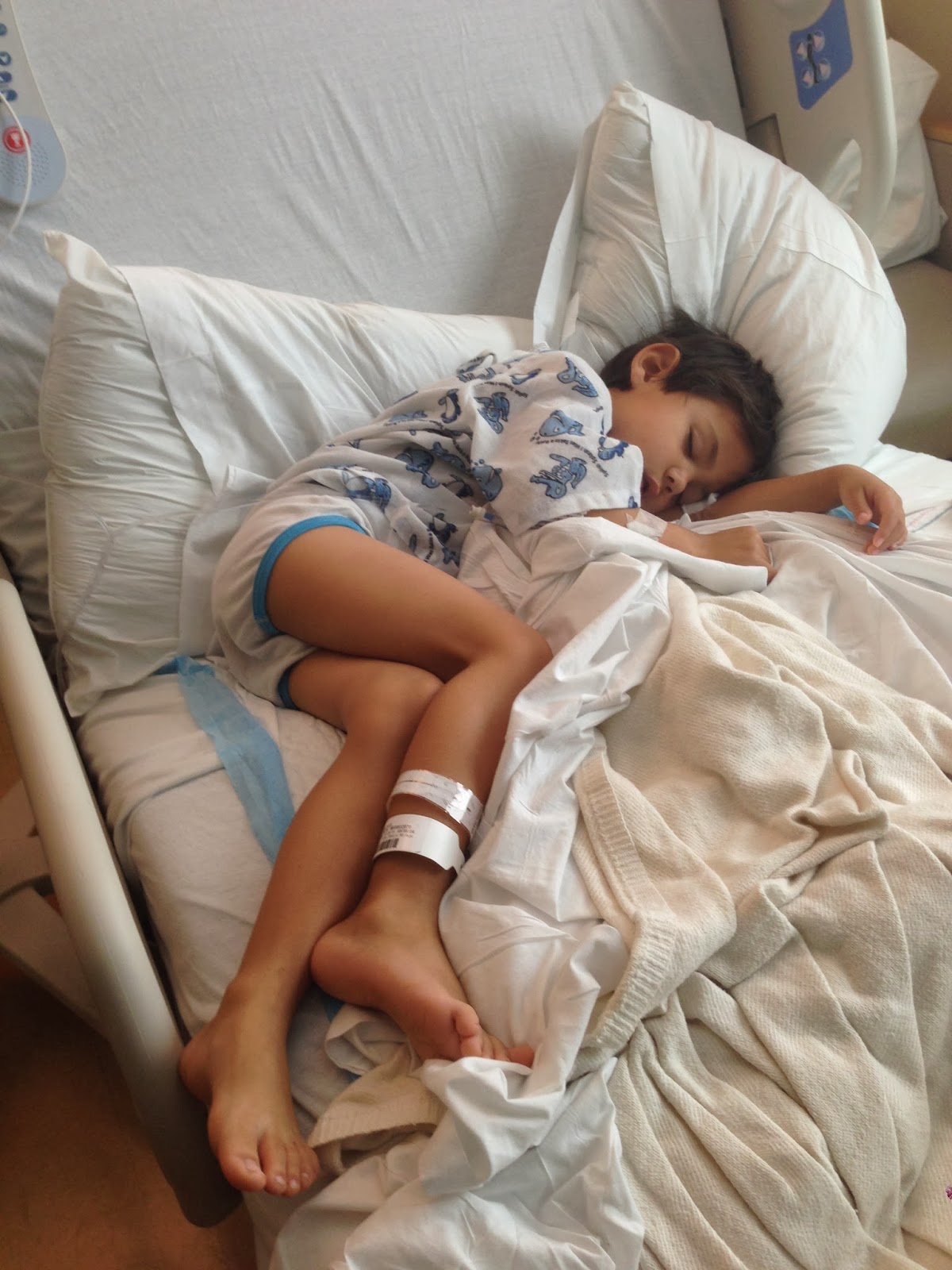 Since he was fast asleep, I thought it would be a good time to go home and take a break from the hospital for a bit (it had been nearly 24 hours since I had taken my last break and boy, I needed it!).  My parents stopped by to watch him for a bit which was nice since it also allowed me time to hang out with both Jon and Logan together at home.

While we were home, Dr. Majumder (Dr. Armstrong's partner, another Infectious Disease specialist) stopped by with results from today's stool sample.  He spent some time with my parents, who immediately relayed the news to us.

Callum's stool showed positive for E. Coli O157, which is a strain that Dr. Bhatia had actually discussed with us early on (on Wednesday, when we were initially admitted to the Pediatrics unit).  As she explained it to me then (when I asked why we weren't putting him on antibiotics immediately), and we've since learned more of now, is that putting him on antibiotics with this particular strain would be bad - because it's been seen to sometimes make the illness worse by triggering additional toxins in the body.

One of the main reasons she had wanted to wait for the stool sample results, was so that they could rule this strain out before prescribing antibiotics.  What that means for us, unfortunately, is that all we can really do is keep Callum hydrated and keep an eye on him, continue to monitor via the bloodwork, until it goes away.

It also means that they'll probably want to keep little Callum in the hospital until his blood work shows significant improvement, which will likely be more than the one day I was thinking we'd be looking at, after my chat with Dr. Mercado earlier.

So, while we now have a root cause to all of this (and that's good to know), the additional days in the hospital, to watch for a possible HUS complication, means we aren't yet out of the woods.  :(

Jon, Logan and I had some dinner at home and relaxed a bit before I started getting antsy (and wanted to relieve my parents from duty), so the three of us headed back to the hospital to allow the boys to visit for a bit.  Again, we've been keeping a close eye on Logan and exposure between the two boys, but it felt like Callum should see his brother as well (and Logan really misses poor Callum - he kept asking me if he could spend the night and sleep with Callum in bed tonight).  :)

Sure enough, when we arrived, the two of them immediately started chatting.  They were, of course, comparing notes on their iPad games that the two of them had been playing.  I tried to capture a couple of quick pics before we split them up, where Logan was showing Callum his latest new game and levels he was conquering.  :) 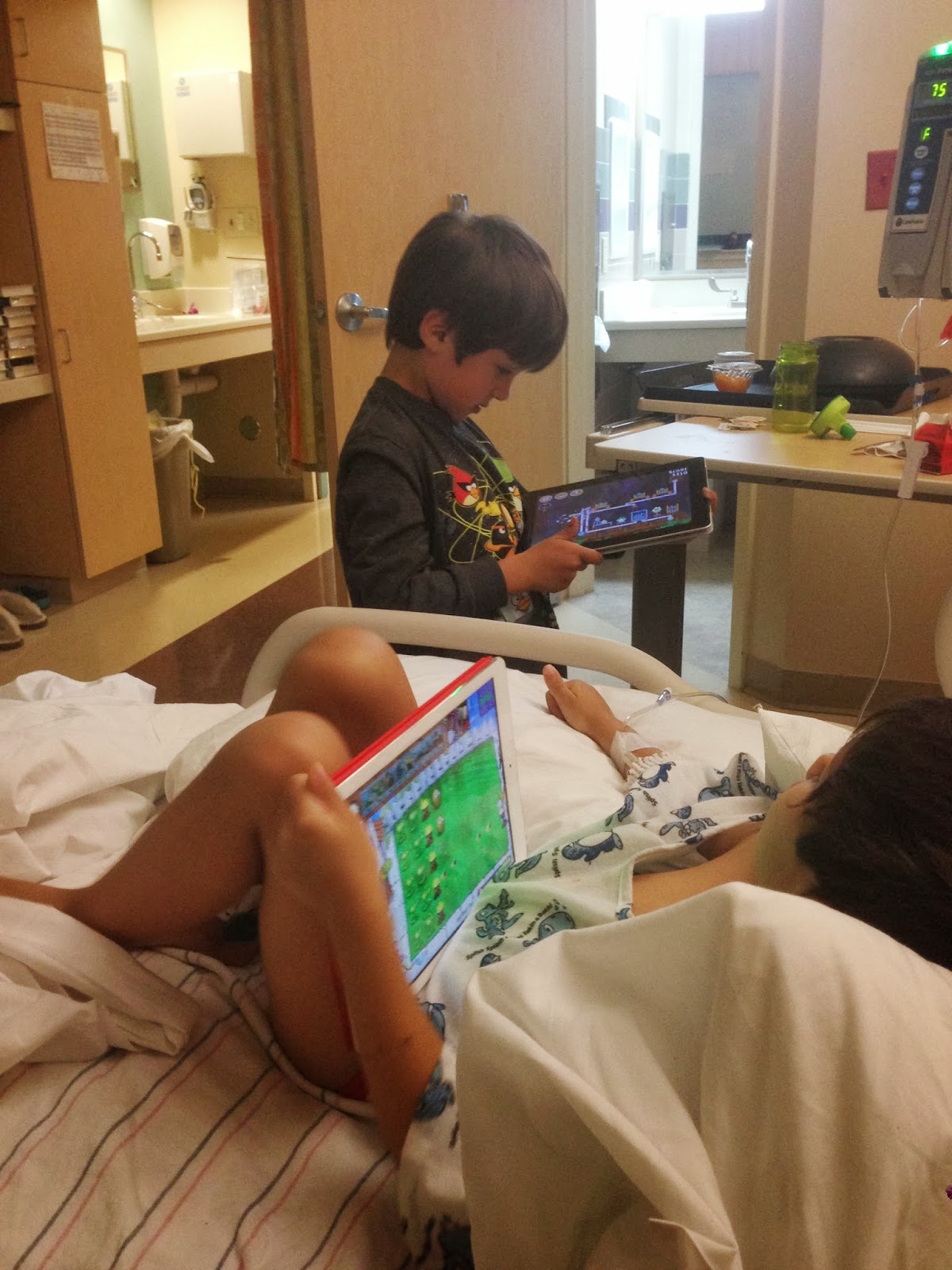 It was really great to see the two of them connect, even if for a short visit. 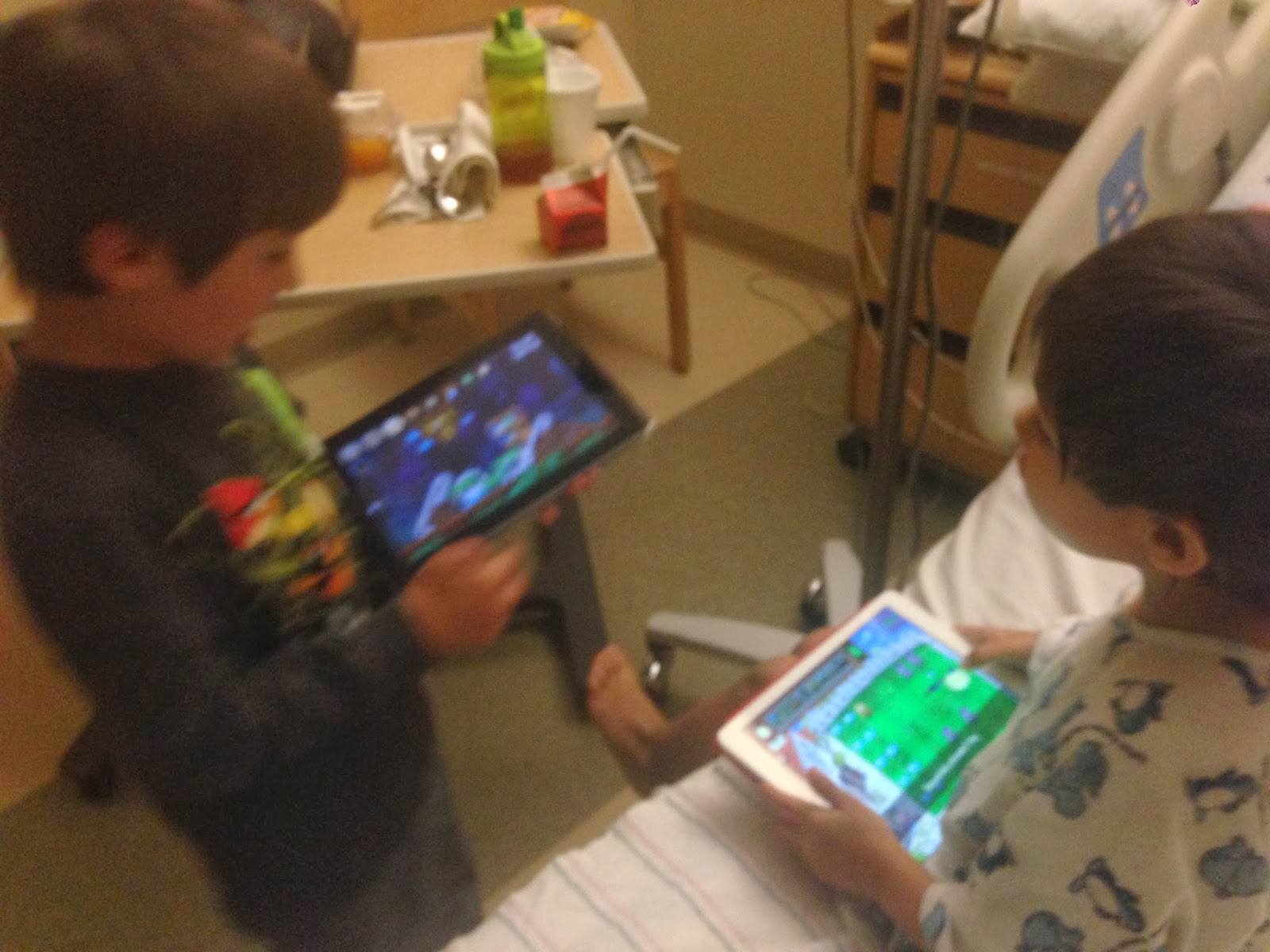