We're becoming pros at this

I wasn't sure how sleeping in Callum's bed with him would work - but about 10pm last night, as he was drifting off, I laid next to him to rub his back and snuggle.  He actually went to sleep pretty quickly but I wasn't terribly comfortable with about two thirds of my ass hanging off the side of the bed, so I moved to my pull out bed but he woke after a couple of hours in more pain.  That went on and off and he kept asking me to lie next to him so we did end up spending the rest of the night together - he was super sweet, at one point, about 2am in the morning, after we had a potty break, he was getting situated back in bed and moved ALL the way to the side saying he was making room for me.  :)

We actually got a bit more sleep and I think the nurses and I were also smarter about managing his pain proactively.  He had a few stomach cramps through the night but not nearly as many, or as painful, and his fever seemed to be lowering and not poking its ugly head as often whenever the nurses would run vitals.  So, while exhausting, I felt like we braved the night much better.

Our pediatrician called first thing in the morning, which I really appreciated.  He said, "Bree, what're you still doing in the hospital?!"  I explained the latest and after hearing my report, he was curious about the platelets count (which really, was the main thing left in my mind that had folks nervous) but wasn't particularly worried.  He said it just means we'll need to do a follow up with him next week to make sure they've gone back up to normal.  He said given everything he was hearing, we should get discharged today - since anything they were doing at the hospital, we could do at home too (meds weren't anything we couldn't do ourselves).

As for Callum - his fever was gone, and it was AMAZING to see the shift in his attitude and overall disposition.  He was smiling.  He was laughing.  He was asking to EAT!! (What, you ask?  Cheetos.  And yes, I gave him a bowl and he ate it all!)  He was playing on his bed, doing little upside down gymnastics like a little kid again. 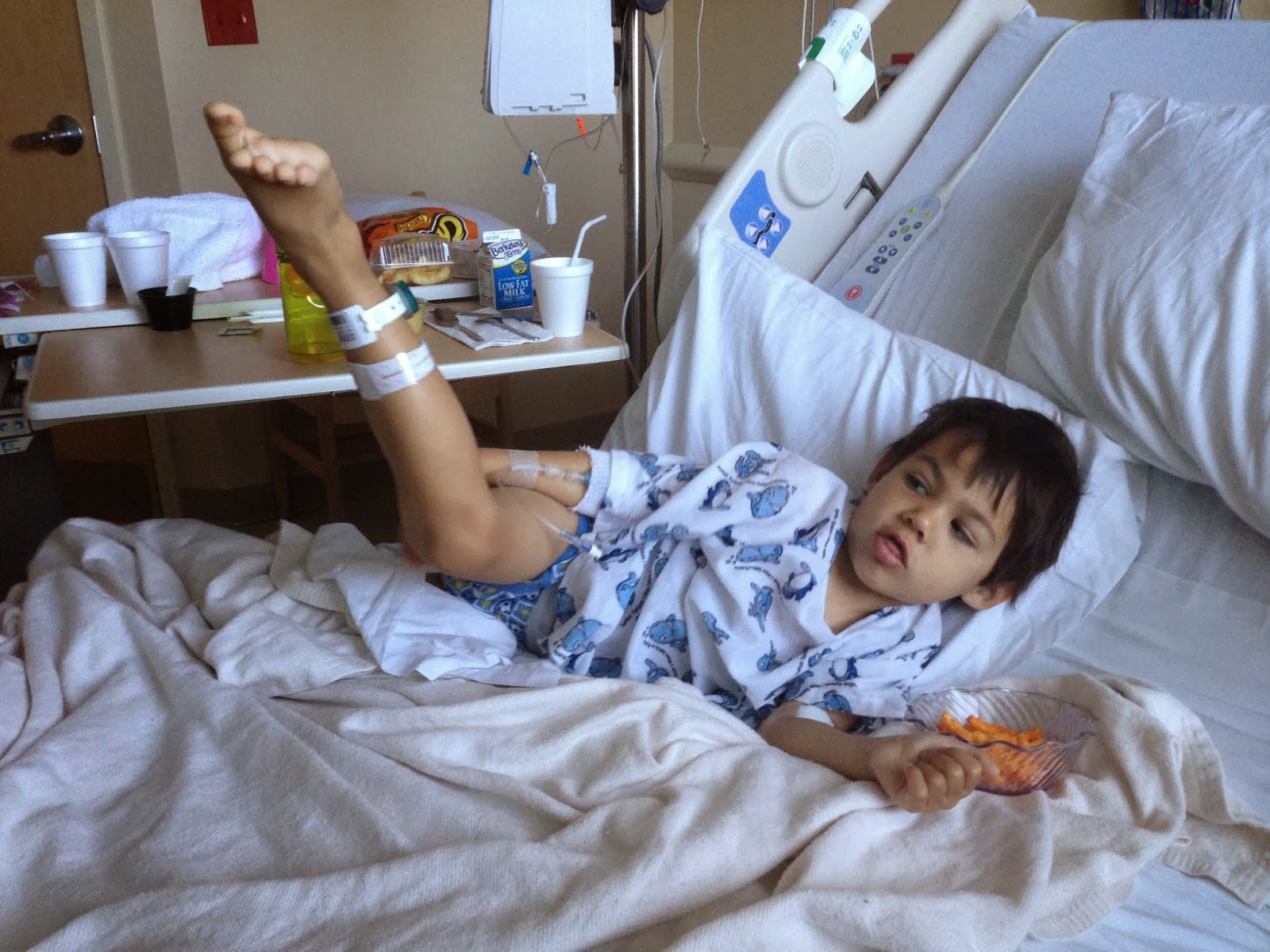 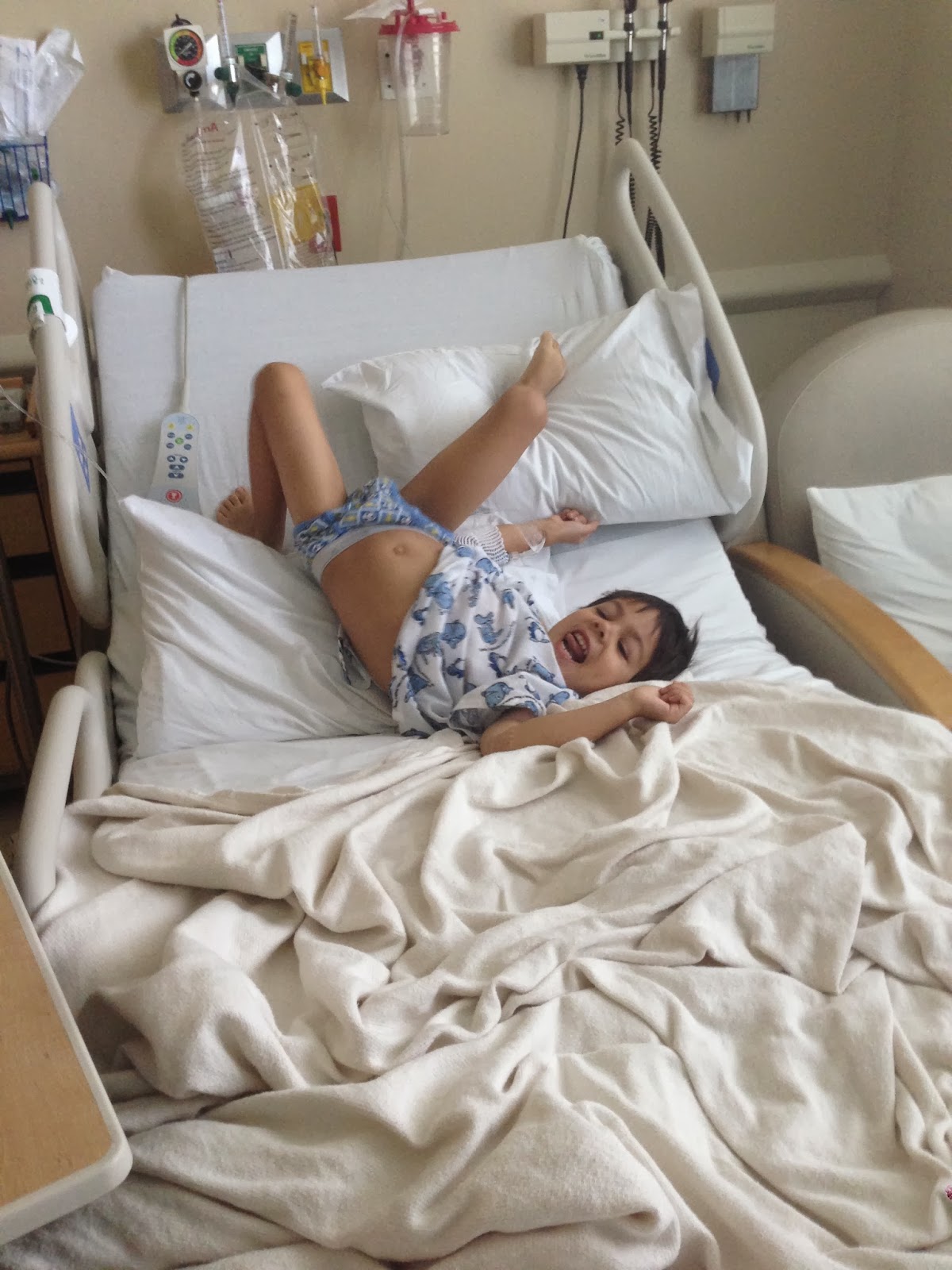 He was getting in and out of his bed on his own.  He was getting impatient with me for not changing the movies fast enough and while that in and of itself wasn't new (he was impatient with me when he was feeling crappy too) ;-) now he was doing something about it, by getting out of his bed and going to the movies to pick something out himself!  It was quite transformational. 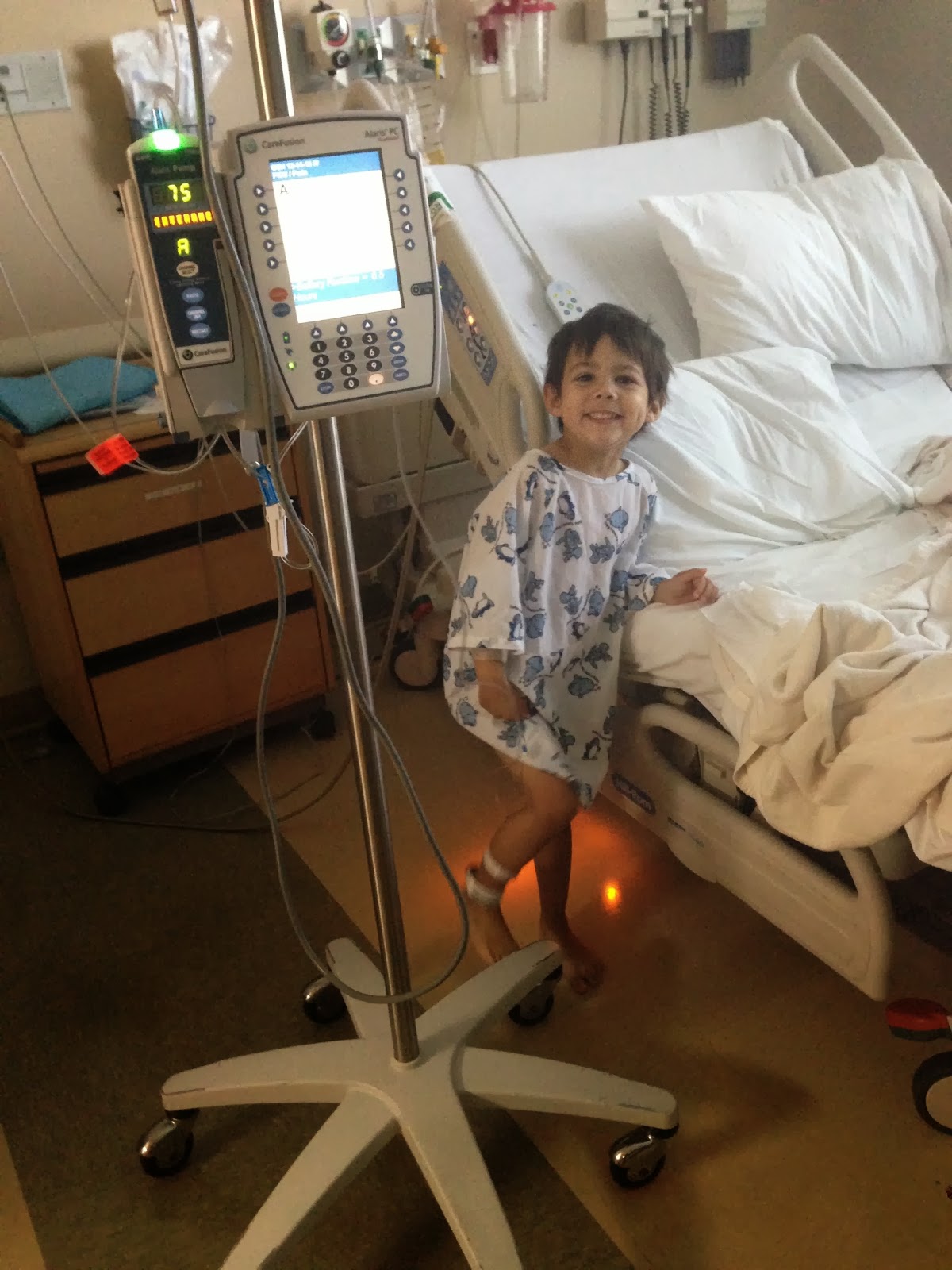 So, we were very sure we'd be getting discharged today.  The nurses started preparing paperwork to get us ready.  I started packing up our bags. 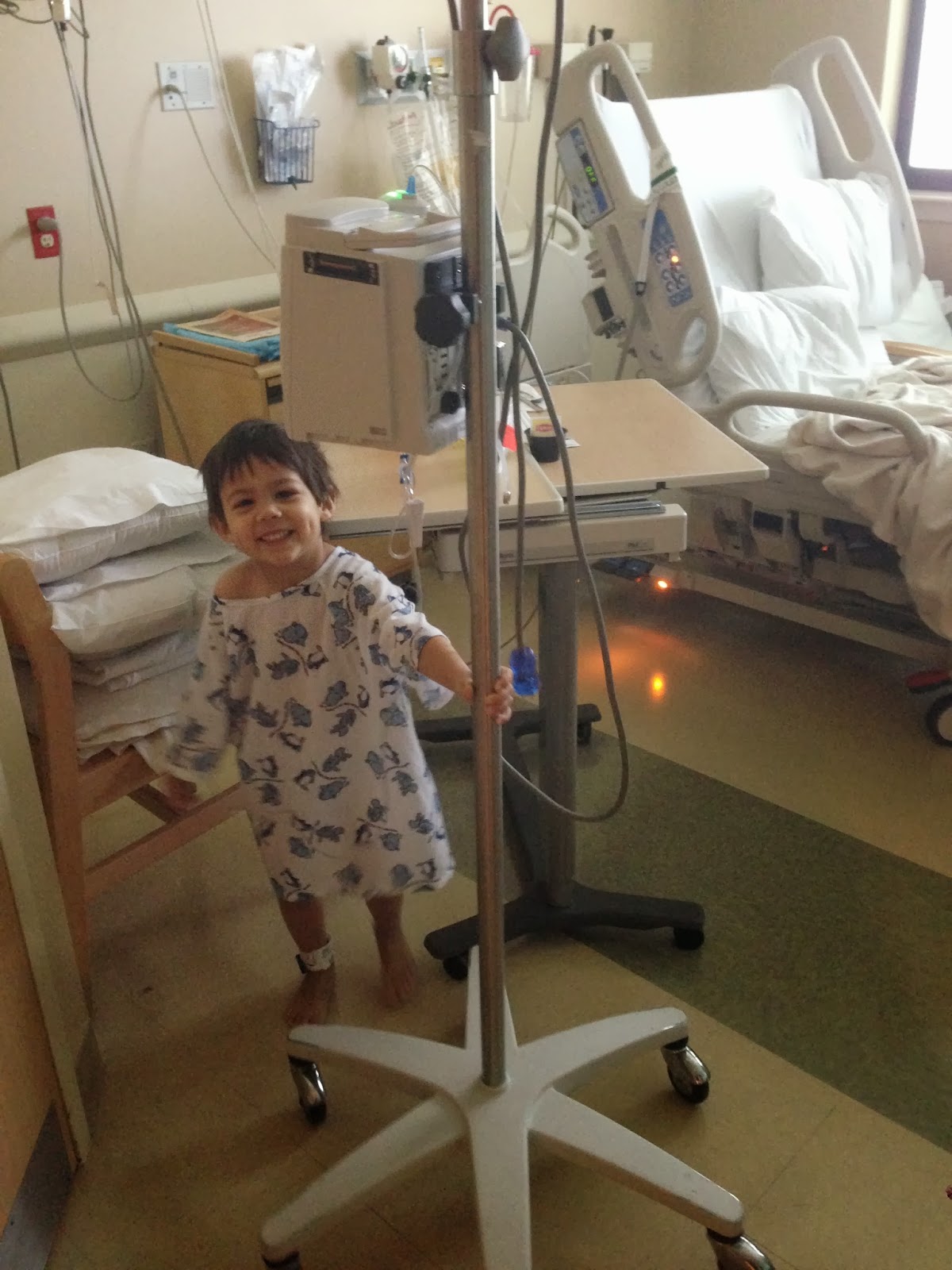 Then, our doctor came to visit.

She was leaning toward keeping Callum another day because she was worried about another fever spiking tonight (since he technically hadn't been fever free for 24 hours, which is what they like to see).

Also, she wanted to see what the stool culture results came back as - since, if they were positive (for various strains of bacteria that they were testing for), we'd need to come right back because the treatment would be antibiotics, only given via IV.  She told me that if the cultures were negative after 48 hours, then that usually means they'll be negative for the entire test (they run the culture test over 5 days).  Today had been negative but it's only the first 24 hours of the test.  :(

I asked her, what about the blood results from this morning?  She said she hadn't seen them yet and would go check.  She went to look them up and immediately came back and said, "Mom, you need to stay another night."  :(

So, unfortunately, Callum's platelets have continued to drop.  And, they don't really know why.  She gave me a few possible reasons why they could - she still felt this was a viral infection (apparently some viruses can suppress the platelet production), but she wanted to consult an Infectious Disease specialist, as well as Dr. Safir (our pediatrician) and Dr. Abi-Hanna (Callum's pediatric gastroenterologist).

After reviewing his blood work with "our team", they all agreed Callum should stay another night.  That would give them the opportunity to continue monitoring him and run a few more tests.  :(  She's running some of those tests off the draws we've already done, but poor Callum will get stuck again tomorrow morning since they can't run everything off of what they've already drawn (and they want to see a new set of data on his platelets and whether they'll start rising back to normal or not).  Likewise, they've also asked us to collect another urine and stool sample tonight - fun!

I was a little shaken by the news - I had thought for sure we'd get to go home.  Callum was in such great spirits and had started to look SO MUCH BETTER.  The ID specialist dropped by to talk to us and examine Callum.  He has a few theories on what's wrong - a couple viruses that he seems to be a good candidate for - and which they'll look for with the tests tomorrow.  Dr. Abi-Hanna also stopped by in the evening (while I was home taking a break and hanging out with Logan) and agreed the couple of viruses that the specialist mentioned were good candidates and that it was good we were staying another night.

Now that I'm back at the hospital for the night, Callum and I are hunkered down watching a few flicks before we turn in (any minute).  I was actually ready to crash once I got back but damn it if he didn't wake up from his nap and get all chatty on me and want to hang out together! ;-)

Still, we're both really quite tired and I'm not sure how many more of these restless nights I'll be able to last through, especially in the hospital with nurses flitting in and out, beeping machines and blinking lights and my poor little guy moaning in agony next to me.
Posted by Mama Bree at 9:59 PM