It sounds a lot scarier than it is - but sometime last night, our status changed to "in isolation", due to a stool sample request that the doctor ordered, once she realized Callum had several episodes of diarrhea in the afternoon.

So what does that mean?

One, we get this ominous looking sign posted on our door. 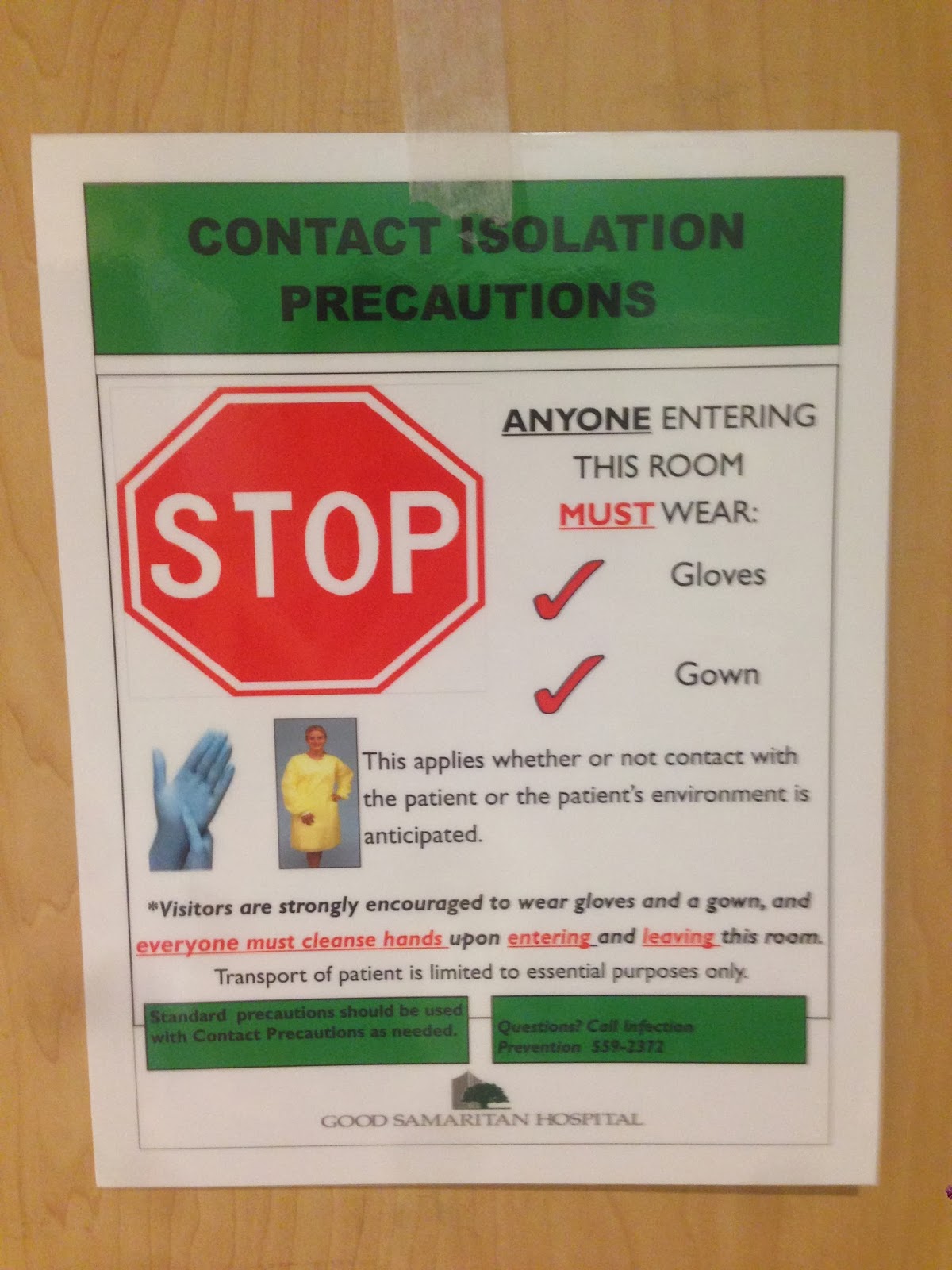 It's mostly an inconvenience really - it means we shouldn't really have too many visitors (Callum's brother, being one of them) :( due to the risk of infecting others.  And, anyone who DOES visit or enter our room needs to go through this rigamarole of washing their hands, donning a gown and gloves, and then washing their hands again when they leave.

Most importantly though, it means poor Callum can't leave his room.  And, Jon and I cannot go to the pantry to freely grab a drink, or juice for Callum, or a snack.  Anything we want or need, we have to ask the nurses to do for us.  Ugh.

We had a really rough first night.  Callum woke every 15 minutes or so, with awful stomach cramps that had him hunched into a little ball crying big heart-wrenching tears.  He also continued to spike a fever throughout most of the night, which was worrisome.  This was with doses of Benedryl to ease the stomach cramps and Tylenol or Motrin (rotating every couple of hours) to keep his fever "down" (it was still very high).

He finally passed out at about 4am and then slept for a chunk of time - waking up around 8:30am or so - just in time for his blood draw of the morning (screaming hysteria ensued for that - yay).  While dead tired, we were both in happy spirits, even posing for a "Look! We made it through the night!" selfie. 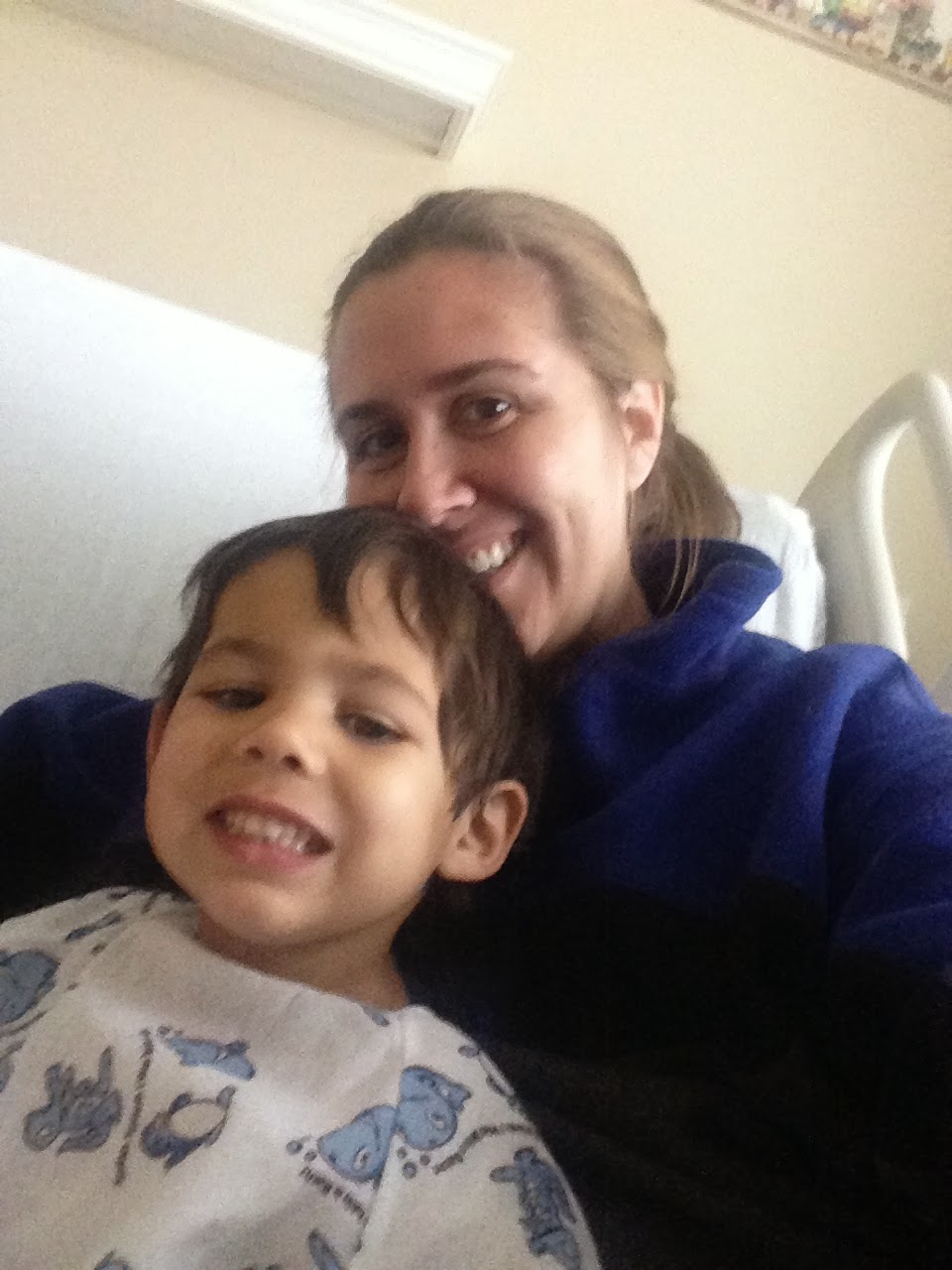 Most of the day was spent waiting for the blood results to come back and the doctor on call for the day to come see us.  Callum had gone through a number of the old classic cartoon (VHS) tapes that the hospital had available for kids and was getting a little bored.

Jon came up the amazing idea of streaming some more current shows via Netflix on our iPad - genius! ;-)  So, we set my iPad up and most of the afternoon Callum just hung out watching his favorite flicks. 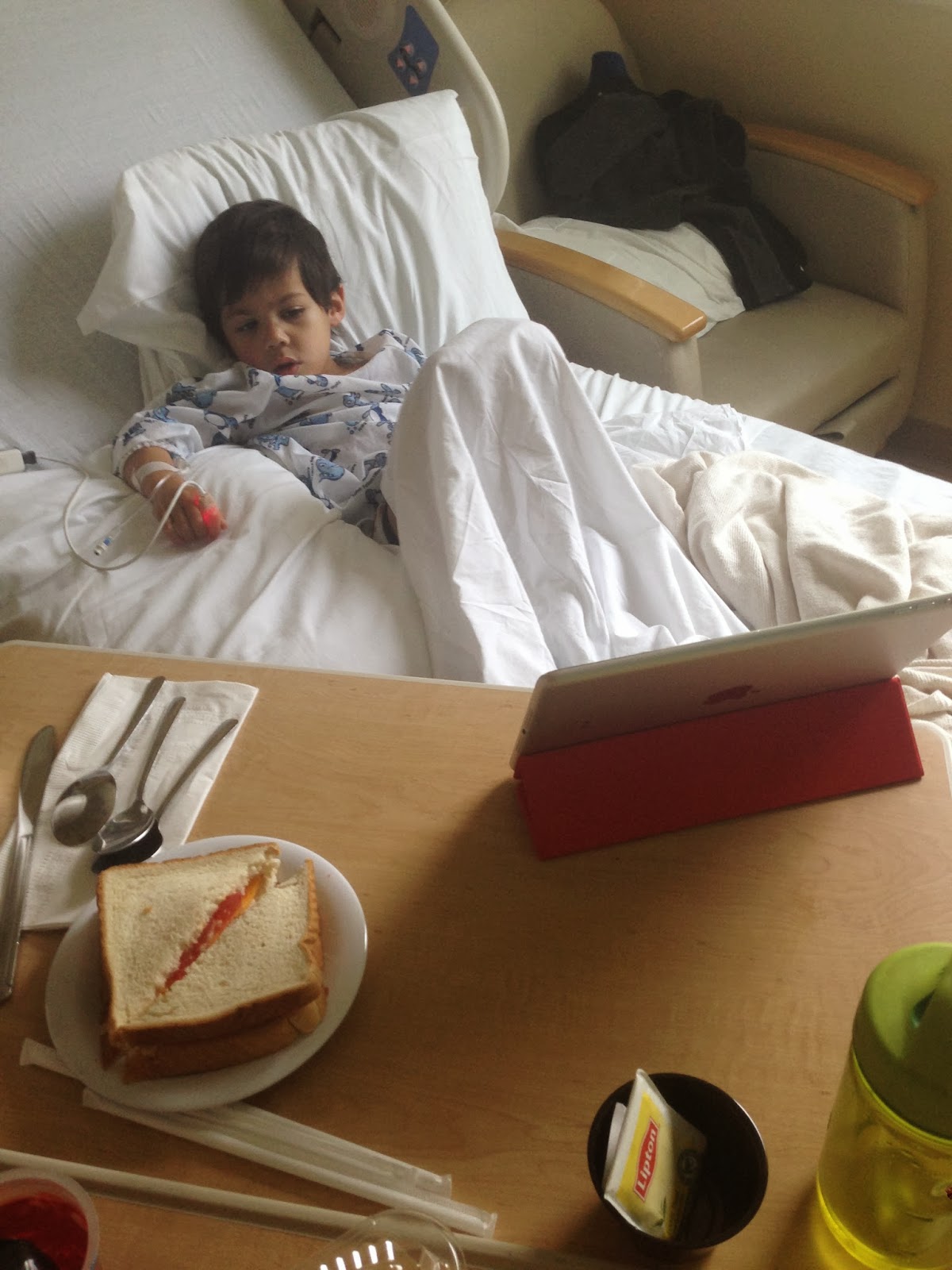 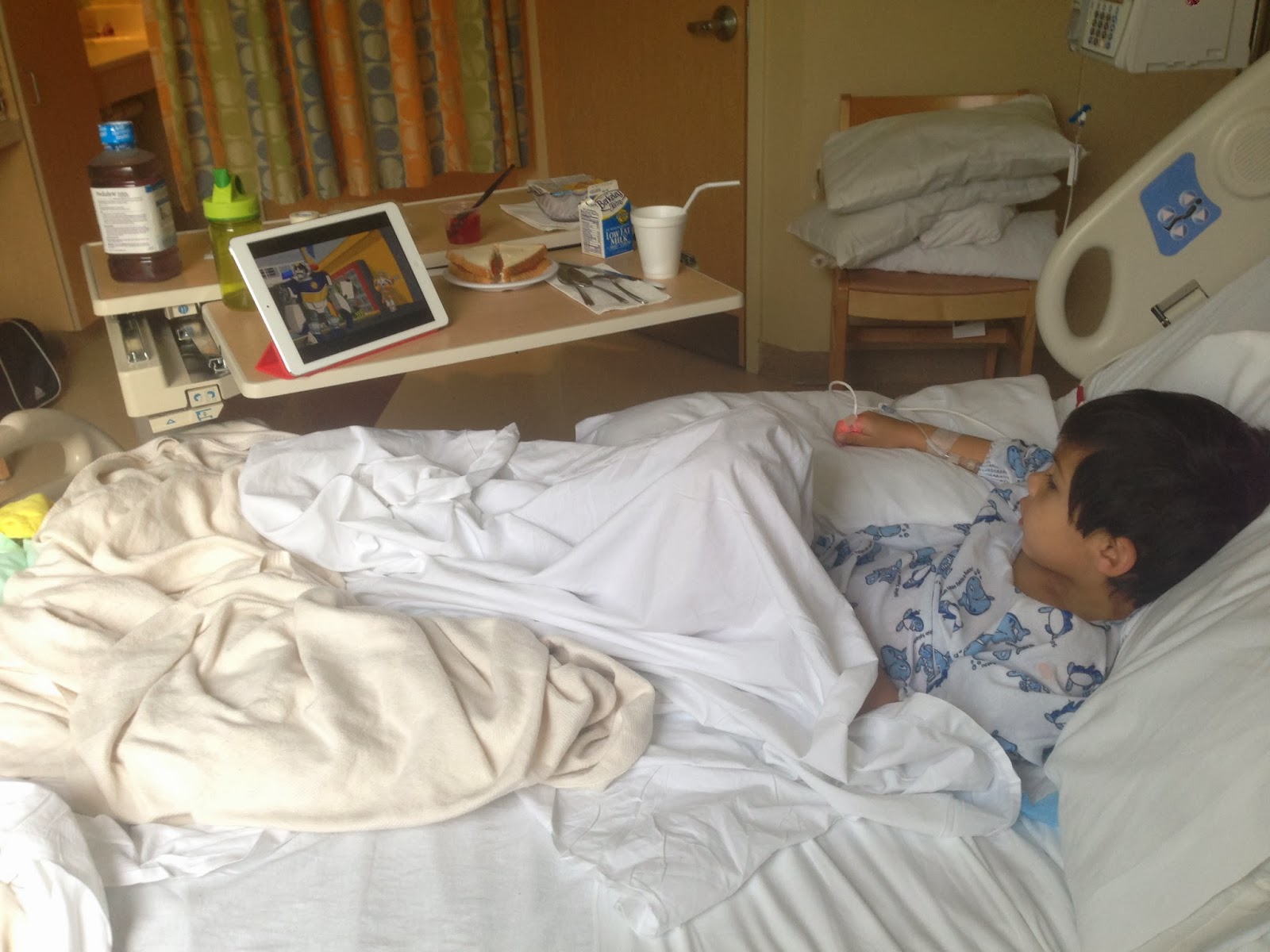 Because Callum's fever continued to spike and he was in a fair amount of pain all night, the doctor decided to keep him another night.  I had been asking the nurses why we weren't hydrating him (via IV) since I wasn't feeling like he was taking in enough liquids, yet he had been going diarrhea all day!  Because the doctor from yesterday hadn't ordered it, they couldn't do anything about it.  Grrr.

However, today's doctor was different!  I'm sure he could tell I was frustrated - but more so, he was just more logical about it all.  He said (what I've been thinking/saying myself) that if Callum is in the hospital, might as well take advantage of it.  Oh, he has an IV already in?!  Then why aren't we giving him any fluids?  (seriously, he said that)  To which I replied EXACTLY.  He nodded to a nurse and voila, fluids were suddenly streaming into my kiddo's system.  Thank goodness.  He also had the nurse give him some additional Benedryl and Tylenol since Callum had another onset of nasty cramps while he was visiting.

The doctor was also a tiny bit concerned with Callum's blood results from the morning.  His white blood cell count went back down to normal levels, so that was good.  But, his platelet count (which was low yesterday), was lower today.  Because of all of the above, and this, the doctor wanted to keep an eye on Callum and do another blood draw again tomorrow.  OH BOY. (Read: NOT FUN)

I headed home for a short nap while Callum was sleeping in the afternoon.  I got back to the hospital in time for Jon to then head out to pickup Logan and take him home.  Because of the "isolation" status and the doctors being a bit cagey about whether Callum had a viral or bacterial infection (but either way, probably contagious), we decided to keep Logan away.  It was really hard for me since I hadn't seen him all day, but I knew it was safer to keep him at home.