Being home has been amazing.  Callum slept in until NINE THIRTY this morning.

When he awoke, I heard him singing to himself in his room for a bit before he got up on his own, went straight to the bathroom, and then ran down the hallway to the den to jump up on the couch and start playing on his iPad.

It was so surreal.  He might as well have NOT been hospitalized for the last 6 days!  Every time the boys get sick, and they bounce back immediately, I'm always surprised.  I don't think I'll ever get used to it.  :) 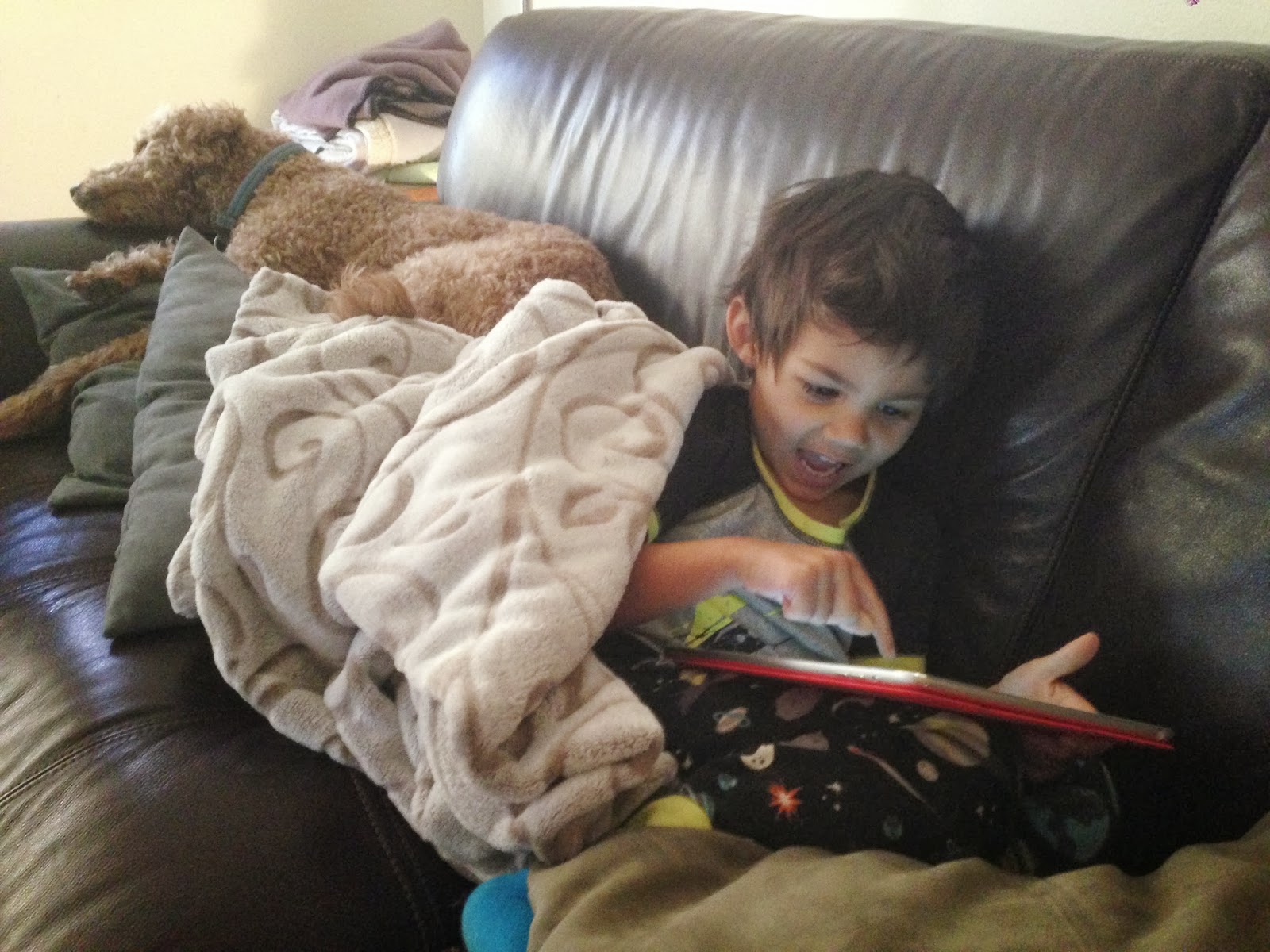 While Callum played on his iPad and lounged around the house, I spent the morning on the phone scheduling follow up appointments and talking with the Public Health nurse some more.  She had a bajillion questions like what did Callum eat every day for the week prior to his illness (are you KIDDING me?!).  *sigh*

She DID check with her lab on the stool samples collected at the hospital.  She said the cultures they are reviewing are still pending - we agreed that the last doctor I spoke to at the hospital must have been referring to the first sample.

Given the first test of the second sample came back positive for E. Coli, Public Health has been alerted to our case and will need to clear us before Callum returns to school.  That means we have to collect two, yes TWO!, stool samples (spaced 24 hours apart - man!) for them to test before clearing him.  Unfortunately it also means we're looking at a much longer stay at home before he can go back to school, since the cultures take several days each.  :(

After I finished my conversation with the Public Health nurse, I decided Callum and I needed to take a walk and enjoy some fresh air.  He was excited - since it meant we'd be walking to "the coffee shop" (aka Starbucks).  ;-)

We also stopped to pick up a burrito for Mama and some chips for Callum.  At Starbucks he had a vanilla milk and donut (I spoke with Dr. Safir later in the afternoon who said if he wants to eat crap, let him eat crap.  We shouldn't worry too much about what he's eating right now, but just that he's eating.  So, I told Callum he had doctor's orders to eat whatever he wanted to eat!)  :) 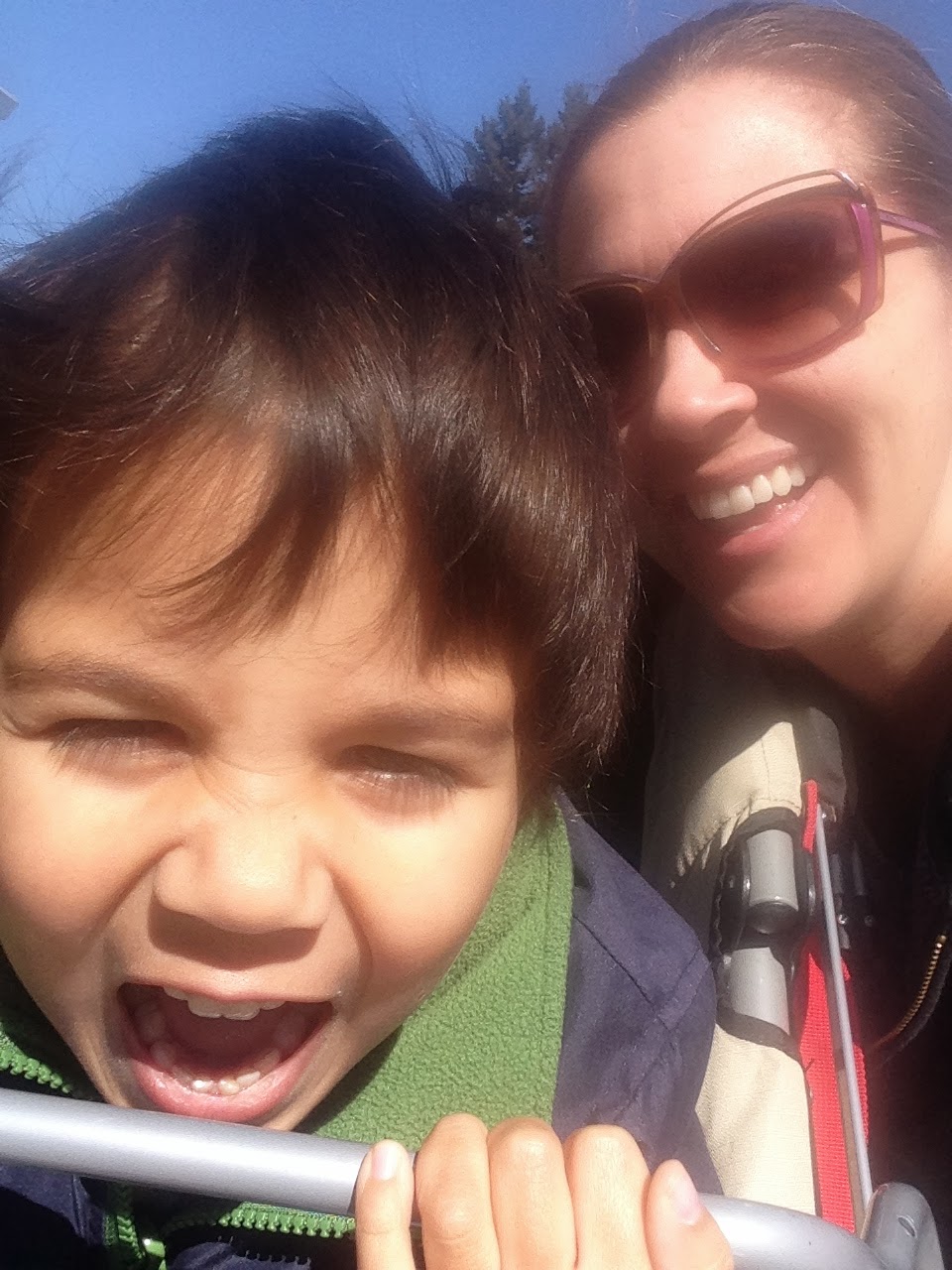 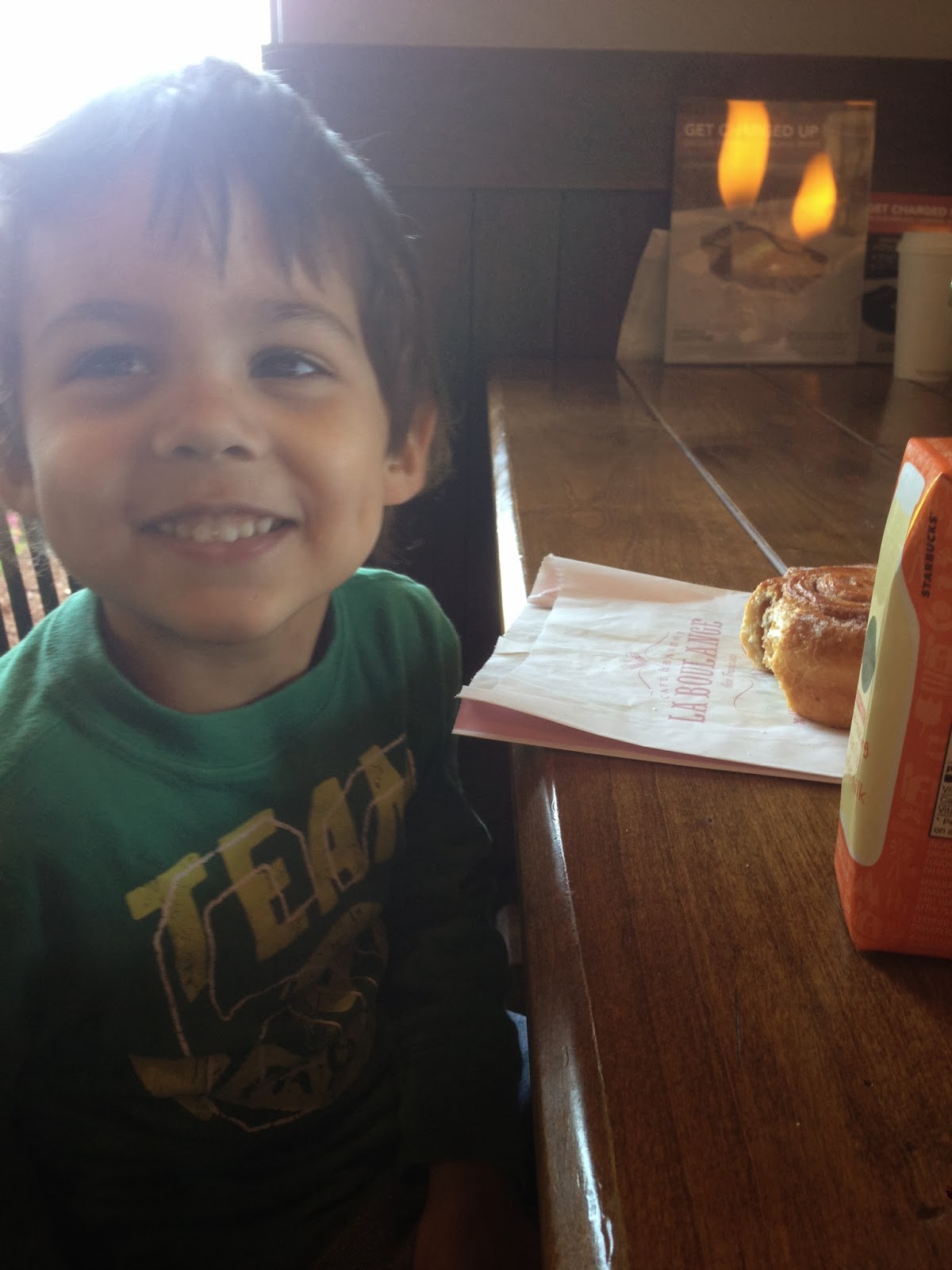 We spent the rest of the afternoon watching movies while Callum snacked on tortilla chips and beans.  I also snuck in a quick snooze during one of the movies - I think I'm still recovering myself.  ;-)   And then later worked on some tax paperwork that we had needed to send to our accountant last week, before the nightmare had hit us.

Later in the afternoon, Uncle Zane dropped by for a visit to check on one of his two favorite nephews.  Jon had come home from work early and picked up Logan for me - so they arrived about the same time Zane had.  Both boys were super happy to see him and play a few games together before he had to go home. 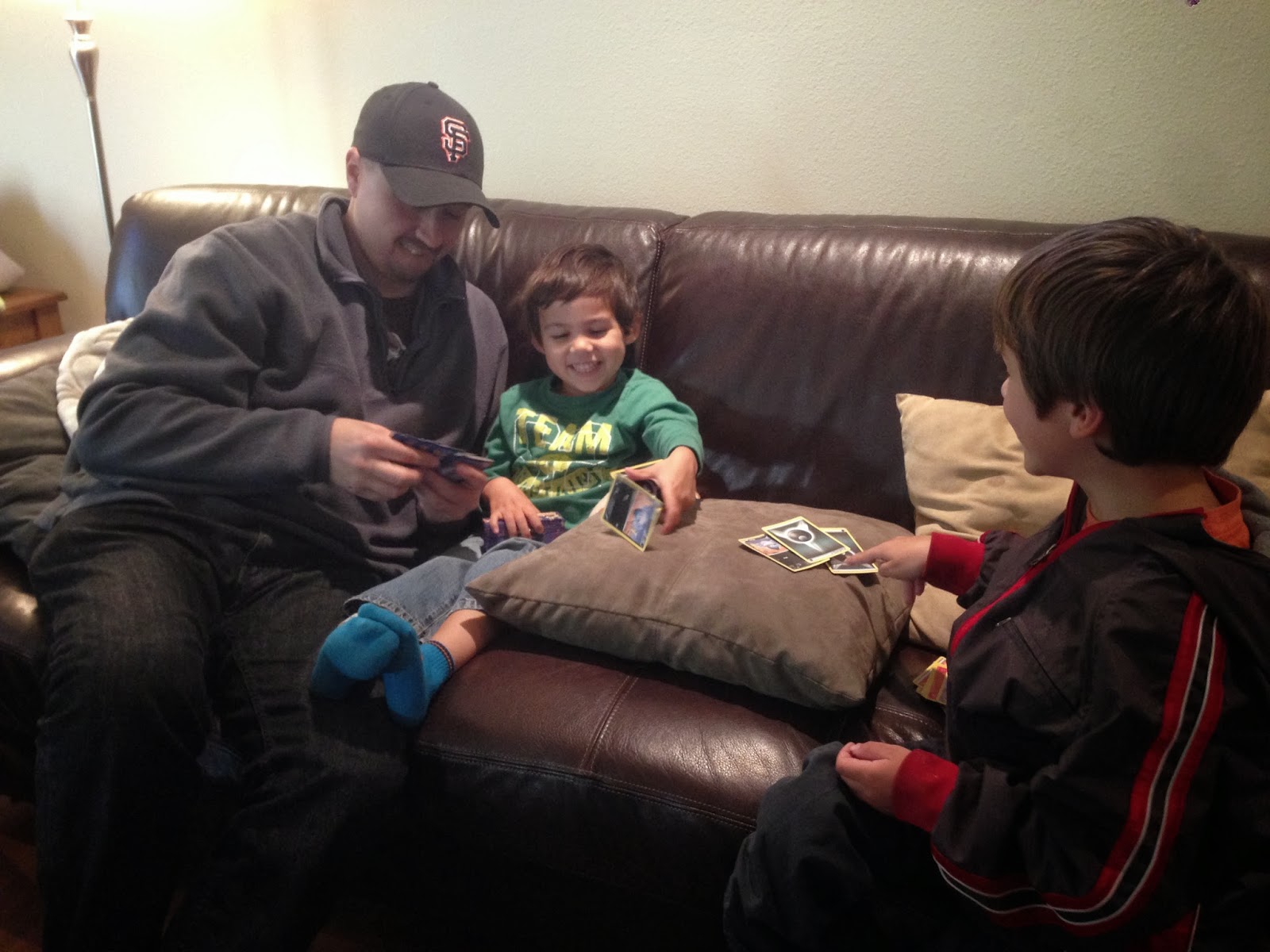 The rest of the evening was spent taking care of homework with Logan, getting Callum to eat a bit more food (fishie crackers and bunny rabbit snacks) and reading through the "how to collect" instructions from our stool sample kits we picked up today.

Isn't this fun - a big scary biohazard sign on the bags - and I've got two of them! 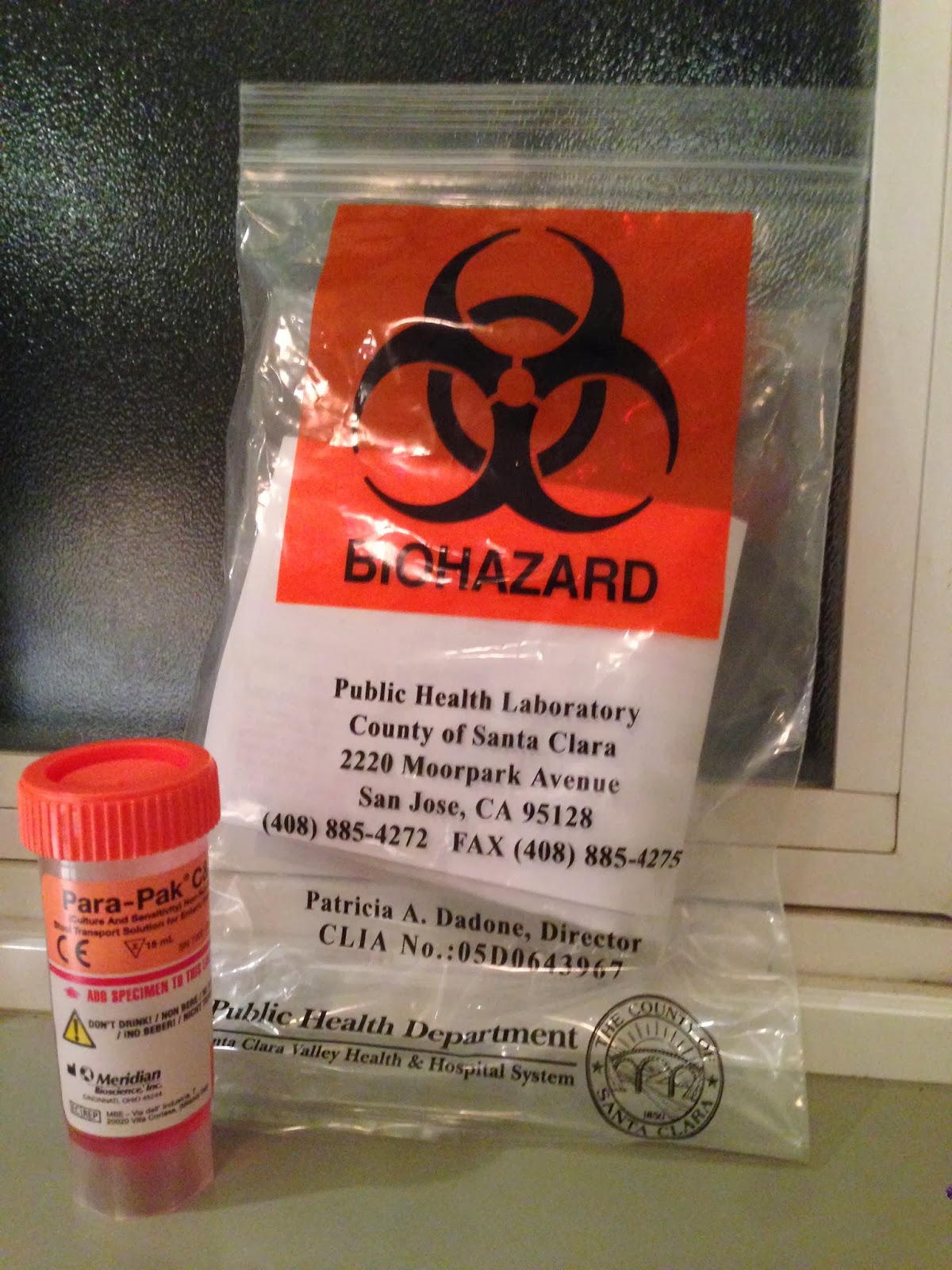 Also, what do you do when you don't have a bedpan to collect your kid's stool sample in?  You whip out your McGyver skills and make (a ghetto-ass) one!  ;-)  I'm pretty proud of this - let's just hope it actually works for our needs. 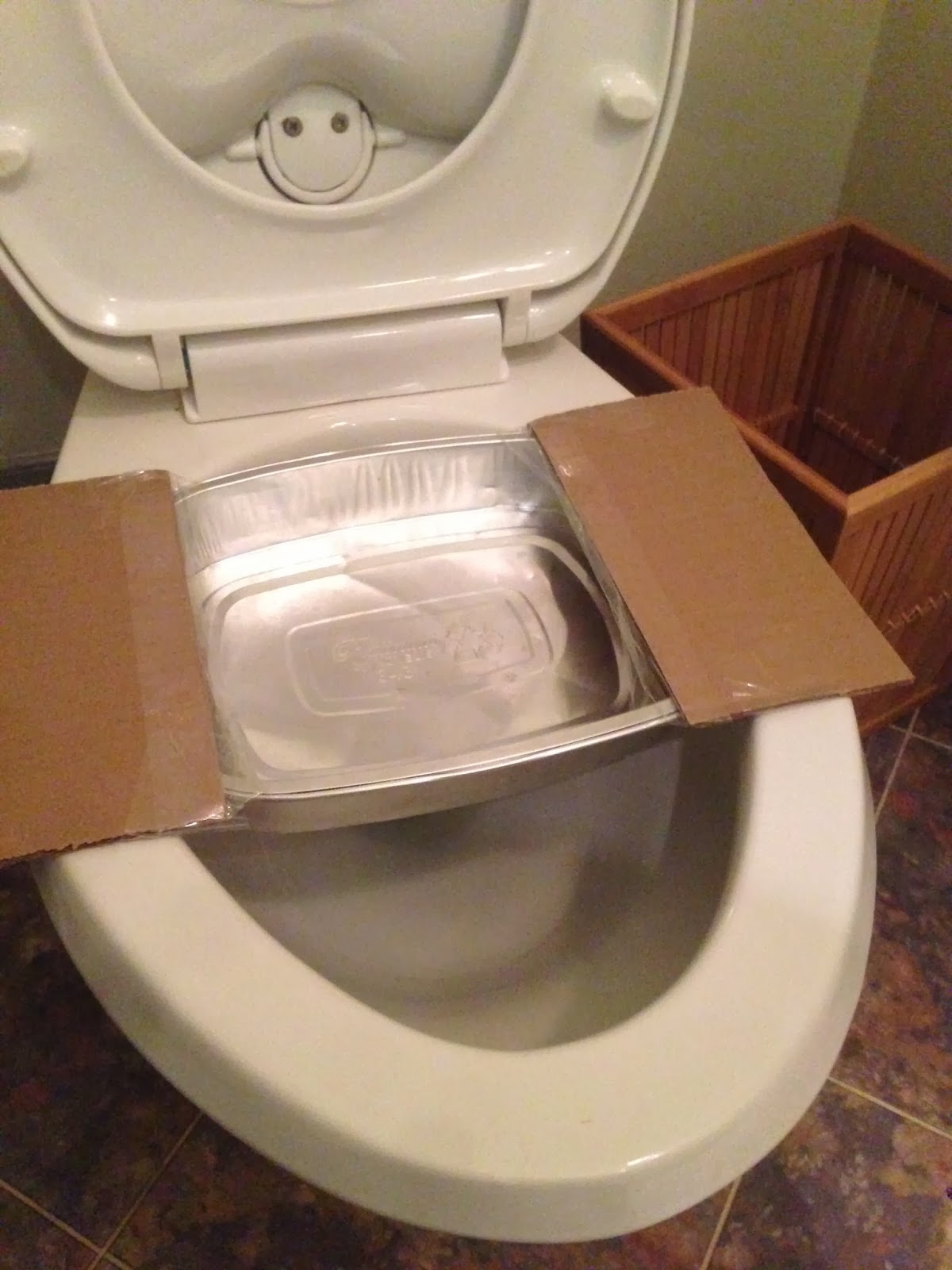 I'm a little nervous about getting Callum to actually poop.  He hasn't had a bowel movement since Saturday. :(   Given he hasn't eaten much, this hasn't been a big concern of the doctors, but I also don't want it to linger too much longer.  Since 1) I don't want to have to deal with my kiddo suffering from painful constipation after all we've just been through, and 2) the sooner we can get these samples off to the lab and started, the sooner we can get the ALL CLEAR and go back to our normal lives once again!